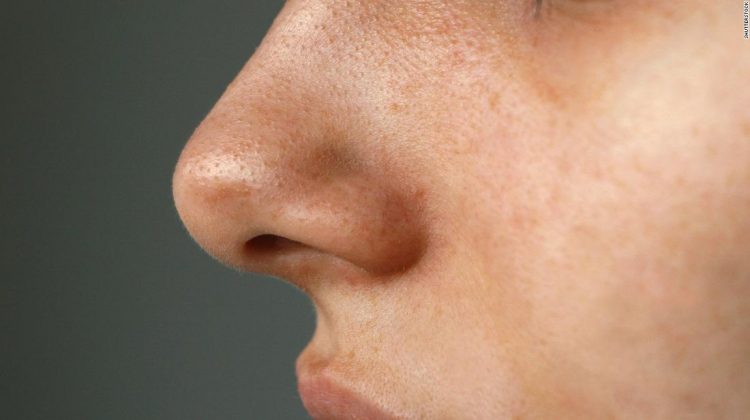 “I grabbed a cup of coffee in the morning, and it just tasted hot,” said Clark, who is a national media strategist at the University of Florida.

“I had felt so good while I was quarantining I thought maybe this was a false positive but then when that happened I thought ‘OK, it’s real,'” Clark said.

A few months later, she was washing her hair with her favorite scented shampoo when she noticed an unusual odor.

“Lavender is my favorite smell, but now the shampoo smelled like sulfur and gunpowder,” she said.

“The absolute worst is hand sanitizer, because it’s everywhere. It smells like cheap tequila and ham with notes of old lady perfume,” Clark said.

“Or what I think that might smell like,” she added. “It’s not a smell I’ve ever smelled in the real world, for sure.”

Clark is suffering from parosmia, a distortion of smell that occurs when receptor cells in the nose don’t detect and translate odors to the brain properly. It can happen after a bad cold or sinus infection, head injury, seizures and certain drugs.

Parosmia has also been associated with a complete loss of smell and taste, called anosmia, that has become a hallmark sign of mild to moderate Covid-19 infections.

Six months after her Covid-19 diagnosis, Clark’s nose is still in recovery.

“I can detect smells — I just can’t really tell what they are,” Clark said. “So I’m hoping this parosmia is the brain trying to fire back up and and start smelling again.”

A year to recover

A new study, published Thursday in JAMA Network Open, may give Clark some hope.

The study followed 97 Covid-19 patients who had lost their sense of taste and smell for up to a year. Every four months, all patients were asked to tell researchers how they felt their olfactory function was recovering. Of the study participants, 51 also underwent objective testing to check their ability to smell at each four-month interval.

“At eight months, objective olfactory assessment confirmed full recovery in 49 of 51 patients (96.1%),” Dr. Marion Renaud, an otolaryngologist at University Hospitals of Strasbourg in France, and colleagues wrote in the study.

Of the two patients who had not fully recovered, one was able to smell, but abnormally, while the other had not recovered the ability to smell.

An intriguing additional finding was that many of the people who had recovered their olfactory function as rated by an objective sniff test continued to believe their sense of taste and smell was reduced. Of the 49 who tested as fully recovered, only 23 said they felt their sense of smell had fully returned.

“This highlights the importance of applying both methods for postviral olfactory disorder evaluation,” the researchers wrote.

The unusual symptom of a loss of smell was discovered relatively early in the pandemic. Studies have found that smell loss can occur in 40% to 68% of Covid-19 cases, most often popping up in mild to moderate cases, and it strikes more women than men.
While colds and other infections have been found to affect the sense of smell, sometimes even permanently, an August 2020 study found that there is a difference. The ability to detect sweet and bitter tastes was particularly impaired in Covid-19 patients when compared to impairment in patients with the common cold.
“It is particularly interesting that Covid-19 seems to particularly affect sweet and bitter taste receptors, because these are known to play an important role in innate immunity,” said study author Carl Philpott, professor of rhinology and olfactology at the University of East Anglia’s Norwich Medical School, in a news release at the time.

Can you check your smell at home?

Yes, there are several ways to accurately test your sense of smell at home, experts say. One is the jellybean test.

“You take a jellybean in one hand, and with the other hand you hold your nose tightly so you’re not getting any air flow,” Steven Munger, director of the Center for Smell and Taste at the University of Florida, told CNN in a prior interview.

“You put the jellybean in your mouth, and chew it. Let’s say it’s a fruit flavor jellybean: if you get the savory plus the sweetness of the jellybean you’ll know you have functional taste,” Munger said.

“Then, while still chewing, suddenly release your nose. If you have a sense of smell you’ll suddenly get all the odors and you’ll say ‘Oh! that’s a lemon jellybean,’ or ‘Oh! that’s cherry.’ It’s really a very dramatic, quick, ‘Wow’ type of response,” he explained.

“If you can go from sweet and sour to the full flavor and know what the flavor is,” Munger said, “then your sense of smell is probably in pretty good shape.”

The scientific name for this process is retro nasal olfaction, where the odors flow from the back of your mouth up through your nasal pharynx and into your nasal cavity.

But what if you don’t have a jellybean? You can use other foods too, said ear, nose and throat specialist Dr. Erich Voigt, director of the division of sleep otolaryngology at NYU Langone Health.

But you have to be careful, because it’s easy to think you’re using your sense of smell when you’re not, Voigt said.

Still aren’t sure if you’re getting it right? Check the internet for medically based scratch and sniff tests.

If you are experiencing a loss of smell, take care because there are dangers such as not being able to smell a gas leak, or perceive rotten milk or rancid food.

CNN’s Jacqueline Howard and Lauren Mascarenhas contributed to this report.