Lord David Frost’s resignation from the cabinet has thrown into stark relief the danger Boris Johnson now faces from the Tory right: the prime minister who delivered Brexit now stands accused of betraying it.

It is almost a year since Frost finalised the “bare bones” trade deal with the EU that was supposed — in the eyes of many Conservative MPs — to give Britain the freedom to forge a new, Thatcherite, economic path.

But on Saturday Frost quit as Brexit minister, lamenting that events had not turned out as he had hoped: in the intervening 12 months any idea of Britain becoming “Singapore on Thames” has evaporated.

“I hope we will move as fast as possible to where we need to get to: a lightly regulated, low-tax, entrepreneurial economy, at the cutting edge of modern science and economic change,” he wrote in his resignation letter.

You can enjoy an 80-seat majority, including the red wall or you can pursue Singapore-on-Thames. You can’t do both for long

Instead of presiding over a supersized tax haven, Johnson’s government is pushing up taxes to their highest level since 1950 while deregulation has been sluggish.

Frost’s resignation has heightened the sense of frustration among Tory MPs, including those on the 100-strong “Clean Global Britain” WhatsApp group, whose members’ exchanges were seen by Sky News.

“The whole point of Brexit is radical supply side reform and moving away from the EU model,” said Marcus Fysh, one Tory rightwinger. When Nadine Dorries, culture secretary, tried to defend Johnson as a “hero” she was immediately removed from the group.

Johnson’s problem is that a large group of Conservative MPs, some of whom helped to unseat Theresa May as prime minister, have a vision of Brexit that the prime minister seems unwilling or unable to deliver.

The idea of a small state Britain is the opposite of what many first-time Tory voters thought they were signing up to in the 2019 election; they expected Johnson to deliver massive spending to “level up” the north.

Will Tanner, director of the centre-right think-tank Onward, tweeted: “The electoral coalition the Conservatives assembled in 2019 was united about many things. But ‘radical supply side reform’ was simply not one of them.

“You can enjoy an 80-seat majority, including the red wall or you can pursue Singapore-on-Thames. You can’t do both for long.”

Finding rules to scrap that would be popular with voters is also proving a problem. One of the principal targets of Tory MPs over the past decade of Britain’s EU membership was the working time directive, which included a maximum 48-hour working week.

But when the Financial Times reported in January that the business department was considering axing the 48-hour limit there was an immediate backlash, forcing business secretary Kwasi Kwarteng to announce there were “no plans to reduce workers’ rights”.

The other problem facing “low tax” Brexiters is that — according to the government’s own independent forecasters — leaving the EU has left Britain relatively poorer, pushing taxes higher to pay for current services.

The Office for Budget Responsibility forecasts that Brexit will cause twice as much long-term economic damage as Covid and that Britain will be 4 per cent worse off in the medium term; trade will be 15 per cent lower than it otherwise would have been. That would ultimately amount to a £100bn annual hit to national income and £40bn less tax revenue.

Lord Gavin Barwell, May’s former chief of staff, tweeted: “The tragedy of David Frost and those who think like him is that they can’t see that the high tax burden they dislike is in part the result of the hard Brexit they chose.”

While Frost’s resignation dwelt on what he regards as the missed opportunities of Brexit, he made no mention of his day job: trying to sort out the disruption caused by the Northern Ireland protocol.

The protocol, negotiated by Frost, includes the creation of an Irish Sea trade border between Great Britain and Northern Ireland — which remains in the EU single market for goods — avoiding the need for a land border on the island of Ireland.

Last month Johnson and senior ministers agreed to push for a compromise deal; Frost’s repeated warnings that he could suspend the deal by activating the Article 16 override mechanism were dialled back.

Last week the scale of the climbdown became clear. Britain was retreating from its insistence that the European Court of Justice should have no role in the region; an “interim” deal focused on border issues was now on the table. 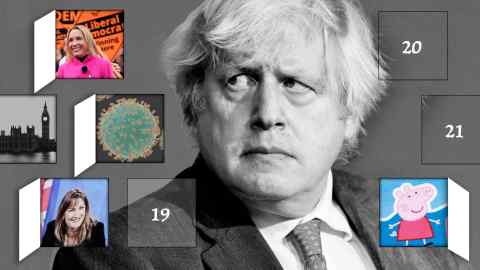 Some government officials say Frost was comfortable with the compromise and that it was Johnson who took a harder line. But Johnson, badly weakened by other political crises, could no longer afford a Frost-led fight with Brussels.

Rishi Sunak, chancellor, warned of the costs of a trade war with the EU while Joe Biden, US president, made it clear that triggering Article 16 would undermine transatlantic relations.

Talks will drag into January with a new British negotiator — to the relief of many in Brussels. Charles Grant, director of the Centre for European Reform, tweeted: “When I was in Brussels two weeks ago, meeting EU & govt officials, I was told that [Frost] was personally responsible for the dire state of EU-UK relations.”

But whoever succeeds Frost, the direction of UK government travel on the protocol is set. Compromise, not confrontation, is the new policy.

For a cabinet minister who has won hearts with his combative stance towards Brussels — Frost comes second behind foreign secretary Liz Truss in a ConservativeHome Tory activists’ monthly popularity poll — that was never likely to be a comfortable place as a new year dawns.