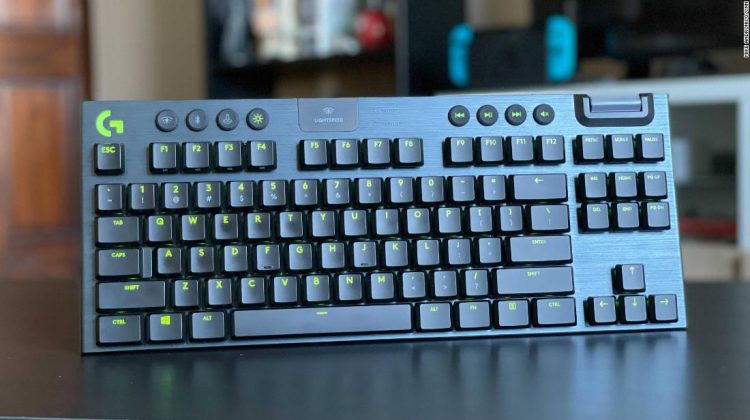 If your keyboard isn’t making loud, satisfying clacks every time you sit down to type, it’s time to change things up. Mechanical keyboards offer better feedback, comfort and durability than the mushy membrane model you might be using right now, and while they’re often aimed at gamers, I’d argue that just about anyone who spends most of their day typing should be using one.

I’ve been a mechanical keyboard user for a long time now, starting with my trusty Logitech G810 Orion Spectrum that still works like a charm after years of heavy use. But since the G810 is no longer sold, I decided to test out some newer models to get a better sense of what’s actually on the market right now. And that led me right to the Logitech G915 TKL — a keyboard that has elevated my home office even further, thanks to a compact, wireless design that still touts the flashy backlighting and punchy keys that I’ve come to expect from the company.

At $229, the G915 TKL isn’t the most affordable of the bunch. However, if you’re willing to invest in a high-end wireless mechanical keyboard that will fit nicely into your home office or gaming den, it’s well worth the premium price. Here’s why.

Mechanical keyboards are unique from other models in that they have switches under the keys that activate with each press. Membrane keyboards (the kind found on many laptops and cheap desktop keyboards like the $27 Logitech MK320) recognize keystrokes through pressure-sensitive pads found under the keys. And while there are pros and cons to each type of keyboard, mechanical keyboards offer a satisfying level of tactical feedback that makes membrane models feel mushy by comparison.

Mechanical keyboards certainly take some getting used to, as they’re generally louder and have heavier-feeling keys than what you’ll find on most membrane options. But having gone fully mechanical for several years now, I find that there’s nothing quite like the instant, clackety feedback that comes with rapidly mashing away at a mechanical keyboard when writing stories, playing games or frantically answering emails.

On top of being more comfortable and enjoyable to use, mechanical keyboards will also last you longer. While the pressure-sensitive materials inside of membrane keyboards are highly prone to wear and tear, the individual keyswitches in mechanical keyboards can stay springy for around a decade. According to switchandclick.com, mechanical keyboards are generally rated to endure more than 50 million keystrokes, which can translate to up to 10 or more years of frequent use. To put this in real-world terms, I used my Logitech G810 for a solid two and a half years of heavy use (including a straight year of working from home), and it’s just as snappy and responsive as it was on the day I took it out of the box.

The keycaps on mechanical keyboards are easy to remove and replace, and you can even repair and replace the actual switches with a bit of technical know-how. The difficulty of swapping your keycaps and switches varies by model, but if you have a hot-swappable keyboard, you can pull them out with a key puller and pop new ones in.

“I find mechanical keyboards are much more serviceable than membrane ones,” says Florence Ion, a staff writer for Gizmodo and podcaster who currently uses the Razer BlackWidow V3 Mini but also has several keyboards she’s customized herself. “It’s pretty easy to take them apart, and once you understand it’s just wires connected to a PCB board, going in and tinkering to fix a botched key doesn’t seem like a tedious feat.”

So while mechanical keyboards aren’t cheap, they’ll stay with you much, much longer than that generic plastic membrane keyboard that probably came with your desktop.

I’ve used and loved a multitude of mechanical keyboards, but the Logitech G810 Orion Spectrum was my workhorse for many years. It’s a big, wonderfully clackety keyboard with customizable RGB lighting, handy media controls and keys that kept my hands comfortable throughout long days of working from home. And while I wanted to recommend this model to the world, it’s fairly old and no longer being sold.

As such, I decided to check out some of Logitech’s newer models, and discovered that the company’s gaming keyboards have gotten even better.

I’ve been using the $169 Logitech G815 and the $229 Logitech G915 TKL — the former is a wired keyboard with a full number pad, while the latter is a wireless model that nixes the numpad for a more compact design. Both are a big step up from even my beloved G810, with much slimmer designs and lower-profile keycaps that still manage to deliver great feedback whether I’m cranking out articles in Google Docs or dodging demons in Doom Eternal. It took a little while to get used to Logitech’s latest keys, but now I can’t imagine going back.

Regardless of which modern Logitech keyboard you buy, you’ll have a choice of three switches: GL Clicky, which offers a loud click and the most tactile feedback; GL Tactile, which offers gentler and quieter feedback; and GL Linear, which is designed to deliver the smoothest, softest keystroke. I tested the Clicky keys on the G815 and the Tactile keys on the G915 TKL and definitely prefer the former.

Typing on Logitech’s Clicky switches makes me feel like I’m using a futuristic typewriter, with a satisfying, audible snapiness that accompanies every keystroke. Then again, I have the luxury of living alone, with no one around to complain about me hammering on a clicky keyboard for eight hours a day. While they feel a bit mushier than the Clicky switches, the Tactile keys offer a nice middle ground that will still get you some bouncy feedback without making your home office sound like a busy newsroom.

While the G815 and G915 TKL both delivered a similarly great typing experience, it’s the G915 that has become the new centerpiece of my home office. It’s fully wireless and more compact than the G815, which made it easy to fit the keyboard into any corner of my work area. It performed well with both my Windows tower and my 24-inch iMac, and it was a breeze to switch between them. The G815 has some handy extra macro keys you can program to perform all kinds of functions and benefits from a full number pad, but it takes up even more horizontal space than my full-size G810.

And while wireless keyboards run the risk of being laggy or prone to short battery life, I didn’t have either of those problems on the G915 TKL. The keyboard endured more than a week of heavy use before I had to juice it up, and even then, I could type and charge at the same time via the included Micro USB cable (USB-C would have been nice). The G915 is rated for 40 hours of battery life at full brightness and promises to fully recharge in less than four hours, two claims that lined up very closely with my testing.

Thanks to what Logitech calls its “Lightspeed” wireless technology that’s packed into the wireless USB adapter, I didn’t notice a hint of delay as I rapidly crunched through work documents and slack chats. Better yet, the G915 TKL also features Bluetooth support, which allows me to pair the keyboard to both my iMac (via USB) and my PC (via Bluetooth) at the same time, and switch between the two at the tap of a button. As someone who frequently bounces between multiple computers, I’ve found this feature to be an absolute game changer. If you’re not looking to spend $229, Logitech’s more standard keyboards like the $29 K380 also offer multi-point connectivity.

Improved designs aside, the G915 and G815 also retain everything I love about Logitech keyboards. The Logitech G Hub software (for Windows and macOS) makes it easy to customize the keyboards’ slick RGB lighting — you can program all kinds of neat rainbow-esque patterns, but I’m going with a solid purple glow these days — and instantly sync their effects to other accessories, such as my $39 Logitech G203 mouse.

The onboard media controls and volume dial are really handy for when I’m blasting Phoebe Bridgers on my iMac, and the easy-to-remove keycaps make me confident I can easily replace a key should I ever lose or damage one. If you do need to replace your keycaps, there are a variety of replacement kits available around the web for less than $50. Both keyboards I tested had an attractive and understated dark Carbon finish, though the G915 also comes in white for folks who want a little more pop.

There are plenty of great nonmechanical keyboards out there — I love Apple’s Magic Keyboard, and the built-in options on laptops like the Dell XPS 13 and Surface Laptop 4 are fantastic. But if you’re someone who spends most of the day typing, a mechanical keyboard is well worth the investment, even if you’re not a gamer. These keyboards offer better feedback than your standard off-the-shelf model, and will oftentimes last many, many years longer than a flimsy old membrane set.

And as a longtime mechanical user who’s spent nearly a month with the $229 Logitech G915 TKL, I can confidently say it’s worth the splurge for those seeking a high-quality wireless option. Its compact design can fit even the tightest workspaces, its RGB lighting is attractive and highly customizable and, most importantly, its snappy keys feel great to type on for hours on end.

If you want to spend a little less or want a full number pad, the $169 Logitech G815 offers the same great features and typing experience within a larger wired model. I’d also recommend considering the $129 Logitech G Pro if you want a more affordable streamlined option that’s a little lighter on special features.

No matter how you do it, however, making the switch to mechanical keyboards will open you up to a wonderful new world of satisfying, comfortable typing. Your hands will thank you — even if your roommates might not.