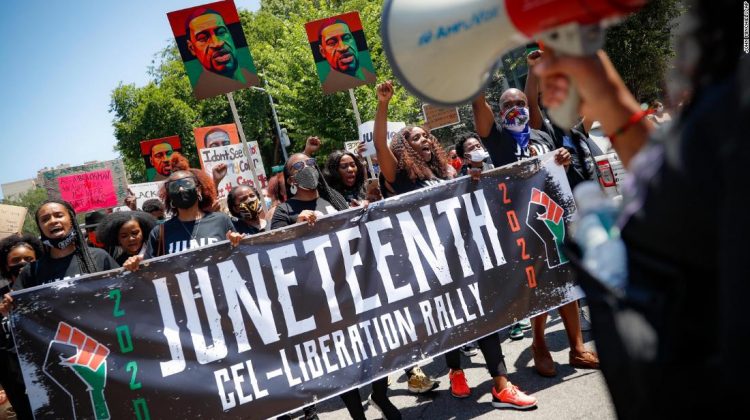 For much of US history, Juneteenth has been a date observed mostly by Black Americans commemorating the symbolic end of slavery. Since the reckoning reignited by the killing of George Floyd last year, though, the tide has changed enormously.

All but one state, as well as the District of Columbia, recognize the milestone of Black liberation in some form or another. Numerous companies mark the occasion by giving their employees the day off.

Congress has passed legislation that would establish June 19 as Juneteenth National Independence Day, sending the bill to President Joe Biden’s desk for his signature.

This makes Juneteenth the first holiday approved since Martin Luther King Jr. Day was established in 1983. Getting to this point took longstanding pushes by activists, several legislative attempts and the momentum generated by the Black Lives Matter movement last year.

Congress has, in various years, passed resolutions honoring Juneteenth, but it wasn’t until last year that lawmakers considered making it a national holiday.

At the height of the antiracism protests of last year, Texas Rep. Sheila Jackson Lee and Massachusetts Sen. Edward Markey, both Democrats, introduced bills in their respective chambers to make Juneteenth a federal holiday.

Despite broad bipartisan support, however, their effort was unsuccessful, with Republican Sen. Ron Johnson of Wisconsin blocking the measure on the grounds that giving workers another day of paid leave would cost too much.

This week, Johnson announced he would no longer block the bill from advancing. The Senate unanimously passed the resolution on Tuesday, the House approved the measure Wednesday.

“For far too long, the story of our country’s history has been incomplete as we have failed to acknowledge, address, and come to grips with our nation’s original sin of slavery,” Markey said in a statement on Tuesday.

“Today’s Senate passage of our legislation to commemorate Juneteenth as a federal holiday will address this long-ignored gap in our history, recognize the wrong that was done, acknowledge the pain and suffering of generations of slaves and their descendants, and finally celebrate their freedom.”