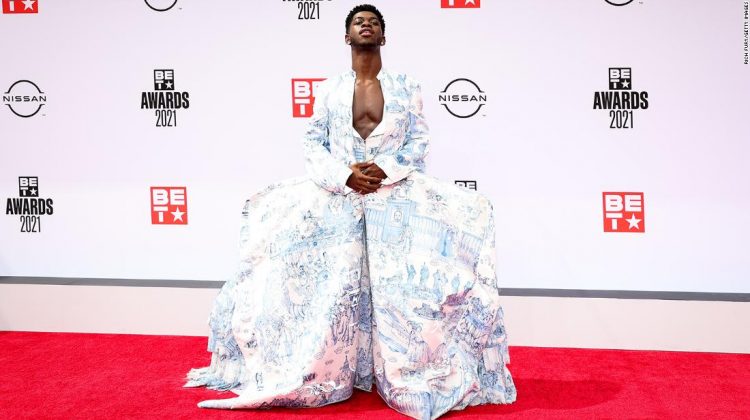 The musician, who turned up in a striking gown, reappeared in an eye-catching floral suit then changed into an all-gold outfit for a live rendition of “Montero (Call Me By Your Name).”

The first outfit, by designer Andrea Grossi, featured an outsize structured skirt, corset and jacket, which the singer paired with a pair of white suspenders. The blue and white toile-inspired dress was covered in illustrations alluding to war and religion.

The design is from Grossi’s collection “Welcome to Deusland,” a phrase that was written across several sections of the gown. Grossi, a recent fashion graduate, told Berlin-based magazine Kaltbult that his 2019 collection was intended to “bring light to the problems of the 21st century” and to critique political and religious ideologies that “have led the populations for a long time in (the) wrong way.”

Lil Nas X recently explored themes of religion and sexuality in the controversial music video for “Montero,” which saw him sliding down a pole to hell where he danced provocatively with the devil.

The singer later shared an image of the outfit to Instagram alongside the caption “doll.”

But Lil Nas X wasn’t done yet. Shortly after first appearing on the red carpet, he underwent a costume change and quickly returned in an embroidered suit by Richard Quinn.

Featuring ’70s-style flared trousers and a pink floral pattern interwoven with crystals and beads, the intricate outfit was part of the British designer’s Fall-Winter 2021 collection.

Later, for his performance of “Montero,” Lil Nas X managed a third outfit as he took the stage in a golden look comprising a snake circlet, oversized collar and skirt. At the end of his performance, he kissed a male dancer in what organizer BET described as a “gesture (that) was particularly fitting during Pride Month.”

Zendaya wearing a 2003 Versace dress as she poses with rapper Lil Kim at the BET Awards. Credit: Bennett Raglin/Getty Images

Posting a video of the star to Instagram, stylist Law Roach said the outfit was an “homage to the Queen Beyoncé,” who wore a shorter version of the dress to perform at the 2003 BET Awards.

Tyler the Creator at the BET Awards. Credit: Jordan Strauss/Invision/AP

He completed the look with apparently self-referential accessories, including a pendant of a man carrying two suitcases.