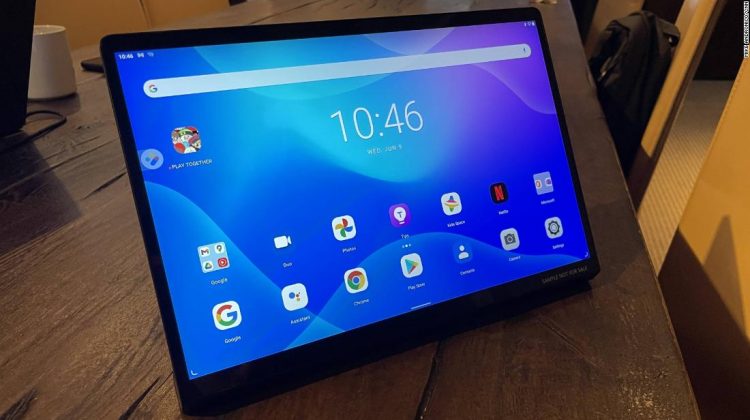 Lenovo has a pair of promising iPad alternatives in the pipeline with the Yoga Tab 13 and Yoga Tab 11, and we got to see them up close. These new Android tablets stand out with their slick fabric-coated designs, as well as their handy kickstands that also allow them to be hung in your kitchen or living room when you’re reading recipes or checking the weather.

On top of these noteworthy new slates, Lenovo also took the wraps off of the Smart Clock 2, an $89 smart alarm clock that could be a good Nest Hub alternative thanks to its included wireless charging dock.

Here’s our first look at Lenovo’s new tablets and smart devices slated for later this year, and why we think you should be excited about them.

The Yoga Tab 13 (starting at $679) is a premium tablet built for both work and play, with a bright 13-inch display and a solid amount of power and connectivity options. The Tab 13’s design immediately caught our eye on two fronts: its attractive Alacantara coating, and a unique kickstand that also doubles as a hangar for when you want a small display on your wall.

It’s rare that we see a tablet with Alcantara, which is the same soft-touch coating that we love using on Microsoft devices such as the Surface Laptop 4. It makes the Tab 13 comfortable to hold while adding some nice extra grip, and gives the tablet a distinct look that sets it apart from the all-aluminum backings of the iPad family.

This classy look is complemented by a built-in kickstand on the rear, which has a neat u-shaped design that also lets you hang the tablet on a wall or board. This could come in handy if you’re following a recipe in the kitchen, or want an easy way to check the weather or news in your bathroom or hallway — especially since you can command the Tab 13 with your voice via the Google Assistant.

We were also impressed by our short time with the Tab 13’s display, which gave a nice amount of colorful pop to the tablet’s blue and purple background as well as the litany of colorful app icons scattered around it. The 13-inch screen has a 2K (2048 x 1080) resolution and promises a high 400 nits of brightness, which seems ideal for watching movies or playing Android games on the go. It’s also an LTPS (low-temperature polycrystalline) screen, which are built to be faster and sharper than a typical LCD display. We’re eager to test out the tablet’s quad JBL speakers, which feature Dolby Atmos support for immersive spatial sound.

Specs-wise, the Tab 13 should be able to power through everyday tasks just fine. It’s running Android 11 with a Lenovo user interface on top with Wi-Fi 6 support for use with the latest and speediest wireless routers (there’s no LTE option for connecting on the road, unfortunately). It even packs a microHDMI to USB cable, which allows it to double as a portable monitor for just about any laptop or desktop. The Yoga Tab 13 starts with 128 GBs of storage for $579 and scales to 256 GBs, plus it supports a microSD card for expansion. In our brief time with Lenovo’s 13-inch tablet, swiping and tapping around the screen to open apps, folders and browsers felt instant and responsive.

If you want a smaller, more affordable version of this tablet, there’s also the $319 Yoga Tab 11. This slate has many of its bigger sibling’s key features like the kickstand, Dolby Vision support on an 11-inch screen and Google Assistant integration. This smaller Yoga Tab is powered by a more entry-level MediaTek Helio G90T processor, and unlike its larger counterpart, has LTE support for keeping you online when Wi-Fi isn’t available. It will still run Android 11 with a Lenovo interface and should handle most everyday tasks.

You also get a Storm Grey fabric coating on the back, and while it’s not quite as nice as the Alacantara on the Tab 13, it’s still a welcome addition — and again, something you won’t find on the latest $329 iPad. The Tab 11 is slated to start shipping in August 2021.

For those that prefer their smart displays at bedside, the $89 Lenovo Smart Alarm Clock 2 that we got to check out seems pretty promising. This tiny touchscreen clock looks like a miniature hybrid of the latest Echo Show and Nest Hub devices, with a colorful 4-inch display and an especially attractive mesh coating that comes in Shadow Black, Heather Grey and Abyss Blue.

The Smart Alarm Clock 2 packs Google Assistant support, so you can queue up music, set an alarm or pull up some Google Photos with your voice alone. The small display looked impressive during our short time with it, exhibiting some nice color when we looked at an image of a waterfall or cycled through various vibrant clock faces. But the real kicker is the included wireless charging pad, which, in addition to charging the Alarm Clock, leaves ample room for you to juice up your phone, earbuds or any other device that supports wireless charging.

Lenovo’s Smart Alarm Clock 2 will ship this September for $89.

We’re especially eager to get our hands on the Yoga Tab 13, which is shaping up to be an impressive premium tablet with a great display and an especially useful design that can be propped up and hung in a variety of different ways. Its ability to double as a monitor sure doesn’t hurt either. And considering it’s cheaper than the iPad Pro ($799 starting), iPad Air ($599 starting) and Galaxy Tab S7 ($649 starting) it could prove to be a compelling alternative for folks who want a powerful and vibrant slate for work and play. The Tab 13 is set to launch in July — pre-orders aren’t up just yet, but you’ll find it here in the near future.

Meanwhile the Tab 11 (coming in August starting at $319) could be a strong value pick that takes on the base iPad, especially since it has the same versatile build as the 13. We’re also eager to see how it compares to the cheaper $149 Fire HD 10, which is powered by a similar processor. And we’re looking forward to trying out the Smart Alarm Clock 2 (arriving in September for $89) to see how it stacks up against the best alarm clocks as well as Amazon and Google’s smart screens.