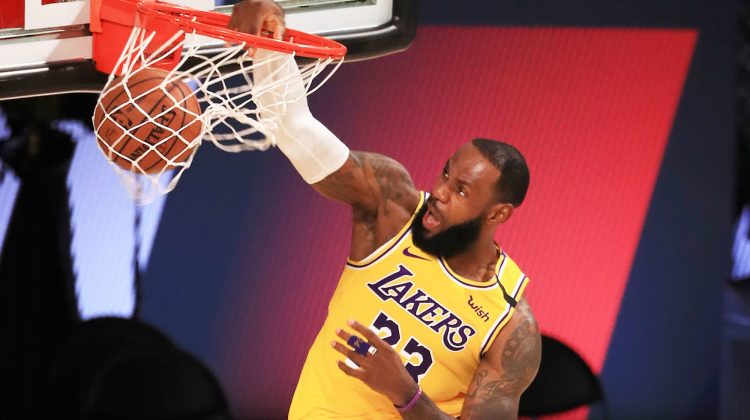 LeBron James of the Los Angeles Lakers at a game against the LA Clippers at ESPN Wide World Of Sports Complex on July 30, 2020 in Lake Buena Vista, Florida.

The biggest star in the National Basketball Association isn’t happy about the current state of league.

LeBron James used social media this week to express his frustration about the injuries the NBA is experiencing during its 2021 postseason. Superstar players including James Harden, Kevin Durant, Kawhi Leonard and James’ teammate Anthony Davis suffered key injuries in the NBA’s 72-game campaign and postseason. James suggested in his Twitter posts that the decision to start the 2020-21 season last Christmas is the culprit.

Without proper recovery, players can fall victim to soft tissue injuries due to muscle overuse. The wear and tear was a reason why the NBA considered starting a new season in January, perhaps on Martin Luther King Jr. Day, after it finished the 2019-20 season last October due to the pandemic.

James used Twitter to apologize to NBA fans missing out on seeing the star players, including himself, as the Los Angeles Lakers were eliminated by the Phoenix Suns. And Davis’ injury may have cost him a chance at a repeat. James then tweeted:

But the “business side” is the real culprit. James is apart of the NBA, and it needed to be saved to protect media rights.

In NBA circles, few disagree with James and note his points are valid, though some suggest grandstanding. Again, James is out of the playoffs and remaining in the spotlight, especially with his new “Space Jam” movie on the horizon, can only help.

Still, James has the clout to gripe about NBA affairs on social platforms, and few in the league office will challenge him publicly.

Defending the league’s stance on the matter in a statement, NBA spokesperson Mike Bass noted injury rates “were virtually the same this season as they were during the 2019-20 season while starter-level and All-Star players missed games due to injury at similar rates as the last three seasons.”

Looking back on the NBA’s decision to return so quickly, one league executive pointed to the future impact of the NBA’s media rights.

Disney and AT&T‘s WarnerMedia pay the NBA roughly $2 billion per year, and the Christmas Day package is a premium asset to leverage to advertisers. Hence, losing those games on that day would be costly. If the NBA didn’t play, the networks would distribute “make-goods” to marketers. That means networks would provide extra ad inventory to make up for the lost opportunity.

Also, networks could request rebates on fees it pays the NBA due to the lost content. And come renegotiation time, they’ll calculate those make good losses and trim the NBA’s money. And if that happened, the league would eventually feel the financial pain.

The NBA will seek significant increases in rights, perhaps up to $75 billion, when its deal is up after the 2024-25 season. So, sacrificing content and losing fan engagement is risky. And the league was already missing 40% percent of its revenue with no fans in arenas due to the pandemic. Hence, it knew the consequences and valued the health of its business more than James’ concerns.

“[The NBA] allowed the networks to say, ‘We can afford to give you a lot more if you start earlier,'” said former National Basketball Players Association executive Charles Grantham.

The players lost about 20% of their paychecks due to the shortened season. That could’ve increased to 25% had the NBA started in January with 62 games. Not many players can afford that loss or have James’ resources to sustain their lifestyles.

James made over $340 million in NBA contracts throughout his career, including $39 million this season, the sixth-highest in the league. Include the $65 million annually in endorsements, and the overall compensation figure increases even more, according to Forbes, .

The average NBA player’s salary for the 2020-21 season was $7.4 million. And of the roughly 513 contracts, only 20 players made more than $30 million, according to basketball-reference.com.

Viewership is too important

But Grantham, now the director of the sports management program at Seton Hall, agreed with James’ frustrations. He noted team owners used scare tactics, mainly the force majeure clause, which threatened to decimate the NBA’s collective bargaining agreement with players.

Grantham then pointed to team values staying afloat during Covid-19 and questioned why players should suffer any losses. The Utah Jazz sold for $1.6 billion days after the NBA’s bubble season ended last year. And in March, the Minnesota Timberwolves agreed to sell at a price of a little over $1 billion.

The NBA loves bragging about increasing team values since Steve Ballmer inflated the market in 2014 with his purchase of the Clippers. Before then, few were interested in buying an NBA team notes respected marketing executive Tony Ponturo. But player unions receive none of the money from those franchise transactions.

Los Angeles Lakers forward LeBron James holds his ankle after going down with an injury during the first half of an NBA basketball game against the Atlanta Hawks Saturday, March 20, 2021, in Los Angeles.

Some of the frustration derives from players being told a December return was initially off the table. And NBA commissioner Adam Silver floated January as a return last September when Covid-19 was still spreading. The thing is, networks know consumers rarely watch TV in the summer. And this year, especially, going up against the Tokyo Olympics isn’t favorable to the league, ESPN or Turner Sports.

So NBA the pivoted, and it may have saved its viewership.

Overall, the NBA averaged 1.3 million viewers throughout its national games on ESPN, ABC and TNT this season. Media executives suggest those numbers are down. But though injuries play a factor, viewership in the more profitable postseason is up — at least in the first round.

The league said it averaged roughly 3 million viewers in the first round, which is up 3% when compared to the 2019 postseason. And the NBA’s play-in tournament helped with fan engagement entering the playoffs. James and fellow NBA superstar Steph Curry averaged 5.6 million for the Lakers versus Golden State Warriors play-in game. It was the most-watched contest on ESPN since the 2019 Western Conference round.

When viewership is strong, networks pay more. Now the NBA should hope for a big market Finals match, as a Milwaukee Bucks vs Jazz match-up wouldn’t exactly be a ratings draw.

But so far, without James, younger stars, including Atlanta Hawks guard Trae Young, are helping the NBA stay relevant. The Philadelphia 76ers are near a collapse in Doc Rivers’ first year. The Phoenix Suns are a success story. Mark Cuban’s Dallas Mavericks are a mess. And Durant is keeping fans engaged.

Even James took notice of Durant’s performance in Game 5 against the Bucks.

The NBA, though more profitable and exciting with James, is surviving without him. Injuries are always bothersome, and fans do favor the stars playing. But this is entertainment, and the show goes on. Next season should help, though. The Warriors will be back; James and the Lakers, too.

Most importantly, stars will have normal time to rest and recover as they return to business.