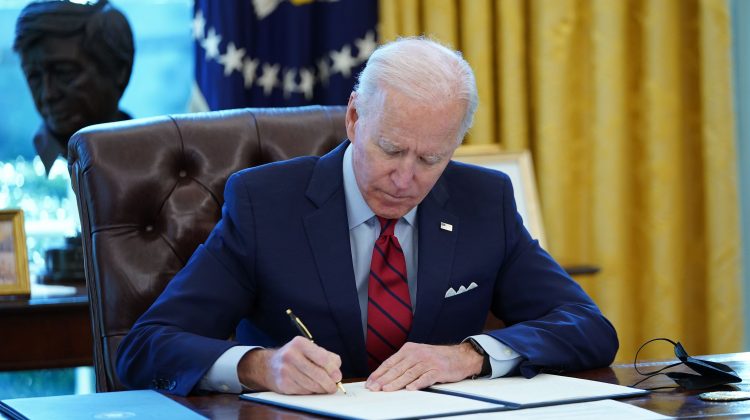 President Joe Biden signs executive orders on health care, in the Oval Office of the White House in Washington, DC, on January 28, 2021.

President Joe Biden is set Thursday to sign a bill establishing Juneteenth, the date marking the end of slavery in the United States, as a federal holiday.

The 3:30 p.m. ET signing event at the White House comes two days before Juneteenth itself, which falls on June 19 each year. Biden and Vice President Kamala Harris are both slated to deliver remarks in the East Room, according to the White House.

Juneteenth National Independence Day will become the 12th legal public holiday and the first new one created since Martin Luther King Jr. Day was signed into law in 1983 by then-President Ronald Reagan.

Juneteenth marks the date that the last enslaved African Americans were granted their freedom. On that day in 1865, Union soldiers led by Gen. Gordon Granger arrived in the coastal city of Galveston, Texas, to deliver General Order No. 3, officially ending slavery in the state.

The final act of liberation came months after the Confederate Army’s surrender ended the Civil War, and more than two years after President Abraham Lincoln issued the Emancipation Proclamation.

Lincoln was assassinated on April 15, 1865, two months before his proclamation made it to Texas.

The holiday legislation passed this week with overwhelming support in both chambers of Congress. The Senate approved the bill unanimously Tuesday night, and the House passed it in a 415-14 vote. The only votes against the bill came from Republicans.

On the House floor before the vote, some GOP lawmakers complained about the name of the holiday, and others expressed concern about the cost of giving the federal workforce another day off. Some also railed against Democrats for pushing the bill to a vote without first allowing committees to examine the legislation and offer amendments.

Still, most House Republicans, even those who objected to parts of the bill, ended up voting for it.

The Juneteenth legislation was sponsored in the Senate by Edward Markey, D-Mass. The House version of the bill, sponsored by Rep. Sheila Jackson Lee, D-Texas, was cosponsored by 166 lawmakers.

This is developing news. Please check back for updates.