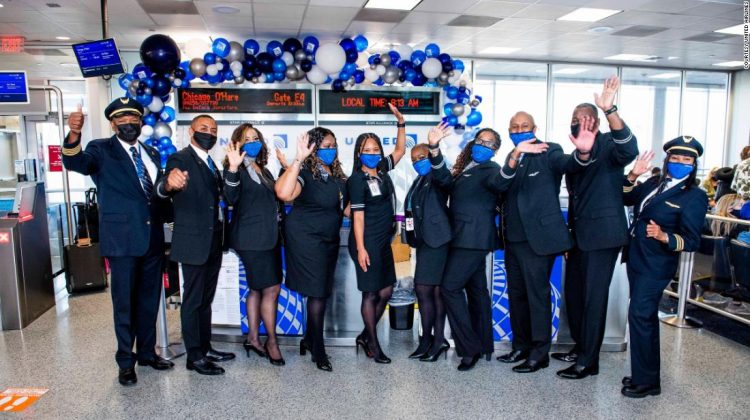 (CNN) — Water cannons blasted over United Airlines flight 1258 as it left its gate, celebrating that every person on the flight crew, from pilots to gate agents and ramp staff, was Black.

The all-Black crew flew from Houston to Chicago on Saturday morning, commemorating Juneteenth, now a federal holiday celebrating the end of slavery. Before takeoff, a celebration of the crew included a speech from Houston Mayor Sylvester Turner, a saxophone performance from one of the pilots, Sal Crocker, and water cannons on the tarmac.

Turner said the flight crew was a symbol for how far the Black community has come over the past 150 years.

“Now, we’re soaring amongst the stars,” Turner said to CNN affiliate KTRK. “Let me tell you, for our ancestors, my parents, if they were still alive, they would just be amazed.”

But for flight 1258, even the flight dispatchers, both in Houston and Chicago, celebrated their Black heritage.

Deon Byrne (second from left), one of the pilots of the Juneteenth flight, said in the 25 years she’s been in the aviation industry, she’s never worked with a crew that has even been half Black, which made this experience incredibly unique.

“It is very difficult being a Black person, a Black woman, in the aviation industry,” said Deon Byrne, one of the pilots, in an interview with CNN. “There’s not a lot of encouragement, and there’s absolutely mentorship for the future generation, but when I came in, it was very difficult to find the funding, the resources, and the connections to get started in the industry.”

Byrne said in the 25 years she’s been in the aviation industry, she’s never worked with a crew that has even been half Black, which made this experience incredibly unique.

“A lot of people say, ‘Oh, what’s the big deal, a bunch of Black people are just flying from here to there,’ but it is a big deal,” Byrne said. “In the aviation industry, people have always questioned if we were as safe or as competent. And we are careful. We’re very competent.”

Flight attendant Nathan Pickney said he’s a native of Houston, site of the oldest Juneteenth celebration, so celebrating this year was even more special.

“This is something that was happening for the first time, that can never be erased or taken away,” Pickney said. “My children are so proud that they can share this with their friends and children. I was just very honored to be a part of it.”

Byrne praised United for having its own flight school with scholarships to assist the next generation of Black students trying to become pilots.

“I was in the cockpit, mission-oriented, and I was just thinking of getting the flight off the ground on time,” Byrne said. “But once my checklist was done, and I saw the water cannons, I teared up. It was very emotional.”