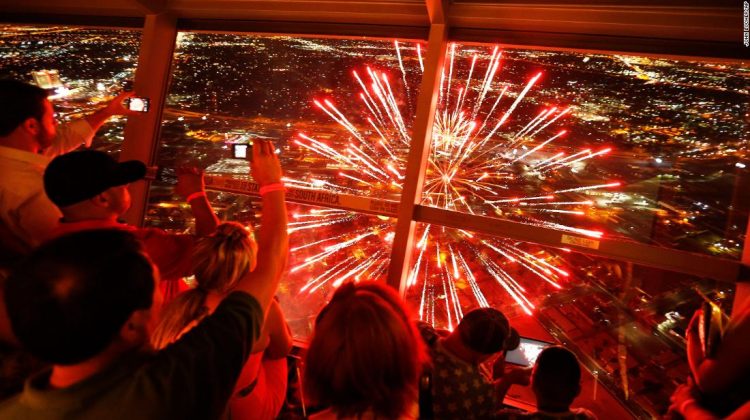 Editor’s Note — Watch CNN’s “Fourth in America Special,” which will air starting 7 p.m. ET Sunday, July 4. Anchors Dana Bash, Don Lemon, Victor Blackwell and Ana Cabrera will host coverage as the United States celebrates its independence and collective effort to overcome Covid-19 pandemic.
(CNN) — After a pandemic-induced hiatus last year, many places in the United States known for their Fourth of July celebrations will be back in action for 2021.

And the highlight of many of those celebrations? An awe-inspiring display of fireworks, of course. Those who can’t make the trips to enjoy the shows in person can catch many of them on live streams and TV broadcasts.

From our biggest population centers to smaller cities and towns, CNN Travel has rounded up some of the top places across America to enjoy Fourth of July fireworks and when to go (all times are local).

Addison, a small town in the Dallas metro area, has a big fireworks show.

Saturday, July 3 | Addison Kaboom Town! This Dallas County town has a population of about 15,300, but it puts on a show that is supposed to impress any “bigger is better” Texan.

While tickets for the celebration in Addison Park Circle are sold out, restaurants and hotels still have watch-party packages. The town will have a live stream on its YouTube channel. A “Freedom Flyover” patriotic airshow starts at 7:30 p.m., and the fireworks start at 9:30 p.m. Find out more here.

Sunday, July 4 | Thunder on the Mountain: Alabama’s biggest city puts on a memorable fireworks display against the backdrop of the colossal Vulcan, the world’s largest cast iron statue.

Vulcan Park and Museum will close at 6 p.m. to prepare for the show. VisitVulcan.com says prime viewing locations include Five Points South, Homewood, Vestavia, Mountain Brook and the UAB campus. The 9 p.m. show will be televised. Find out more here.

Boston has one of the most anticipated July 4th fireworks shows in the country.

Sunday, July 4 | Fireworks and Pops Concert: This annual event is beloved not only in Boston but across New England. In 2021, the fireworks and the concert will be held in different locations.

The fireworks portion stays in Beantown, with a show at Boston Common starting at 10:30 p.m. Meanwhile, the Boston Pops Independence Day concert will be held at Tanglewood in Western Massachusetts. Tickets are sold out, but will be broadcast from 8 to 11 p.m. Find out more at Boston Discovery Guide | Boston.gov | Boston Pops.

Sunday, July 4 | Celebrating American Independence: People from Minneapolis and Des Moines who want some small-town Independence Day charm without giving up a big show can head to little Clear Lake.

This town of about 7,600 is serious about marking American independence. Events stretch out from Wednesday, June 30, to Monday, July. 5. The topper — Clear Lake’s renowned fireworks shows — starts at 10 p.m. Find out more here.

Sunday, July 4 | 4th of July Spectacular: Wouldn’t it be nice to listen to the Beach Boys before watching fireworks shot over balmy ocean waters? People in Fort Lauderdale will be able to do both this year.

The Beach Boys perform live from 7:30 to 9 p.m., and the seaside fireworks show starts immediately afterward. You can even take water taxis to the event. Find out more here.

Sunday, July 4 | Las Vegas Strip Fireworks: So much of Vegas is literally a gamble, but it’s a pretty safe bet that Vegas will put on a dazzling fireworks show.

In fact, there will be various shows and events all over the area. But the biggest display will be on the Strip at 11 p.m., when fireworks will be shot off simultaneously from the rooftops of Caesars Palace, The Aria, Planet Hollywood, Treasure Island, The Venetian, The STRAT and the new Resorts World. Find out more here.

Fourth of July fireworks explode over the Cumberland River in 2016.

Sunday, July 4 | Let Freedom Sing! The capital of Tennessee and of country music aims to deliver big in 2021: Country superstars and the largest fireworks show in the booming city’s history.

Brad Paisley is the headliner for the musical festivities. The entertainment starts at 4 p.m., and Paisley is set to take stage a little after 8 p.m.

The Empire State Building (left) and the Chrysler Building can be seen in the background during the Macy’s 2017 fireworks show from Queens.

Sunday, July 4 | Macy’s 4th of July Fireworks Spectacular: The folks at Macy’s don’t rest their laurels on the Thanksgiving Parade. For summer, they put on the largest fireworks show in the nation.

Macy’s says it has worked to provide up to two miles of public viewing space for the free show. Live broadcast coverage of entertainment — including Reba McEntire and Black Pumas — starts at 8 p.m. Around 9:45 p.m., fireworks will be shot from barges in the East River. Find out more here.

Sunday, July 4 | AmericaFest: Held at the iconic Rose Bowl, the in-person show is back after going virtual last year. The theme for 2021 is “Celebrating America’s Perseverance.”

Sunday, July 4 | Wawa Welcome America: The city where the whole independence thing was made official goes large for this holiday, with 16 days of events that started on Juneteenth.

The concert begins at 7 p.m. It culminates at 9:30 p.m. with a fireworks display over the Philadelphia Museum of Art. People who want to watch the show from the Benjamin Franklin Parkway can begin arriving at 8 p.m. in the area between Eakins Oval and Logan Circle. Find out more: Wawa concert | FVisit Philadelphia.

Sunday, July 4 | Big Bay Boom: Southern Californians have good options for fireworks shows. Those around San Diego get the treat of Big Bay Boom, during which fireworks are set off from four barges in San Diego Bay.

Suggested viewing locations are Coronado Ferry Landing, Harbor Island. Shelter Island, the Marina District and North Embarcadero. And then anyone with a boat has great viewing options. The fireworks start at 9 p.m. and will broadcast live on several outlets in California. Find out more here.

Fireworks light up the night sky over the Gateway Arch and Old Courthouse as part of an Independence Day celebration in 2019.

Sunday, July 4 | Fourth of July Fireworks Spectacular: Missouri’s largest city has an enviable backdrop for a fireworks show: the Gateway Arch and the mighty Mississippi River.

Fair Saint Louis says it’s going to be the largest July 4 fireworks it has ever produced. The show will start at about 9:40 p.m. Fair Saint Louis said it hopes “spectators will enjoy the fireworks show wherever they can safely view it, including by streaming live at home with their families or by watching from downtown restaurants and hotels in support of local businesses.” Find out more here.

Sunday, July 4 | A Capitol Fourth and July 4th Fireworks: No roundup of July 4th celebrations and fireworks shows is complete without an entry from the nation’s capital.

The 41st annual Capitol Fourth concert, hosted by Vanessa Williams, will be broadcast on PBS, though it will be recorded this year out of pandemic precautions. It starts at 8 p.m.

While the show is back on in many cities across the nation, some popular favorites have been canceled for 2021.