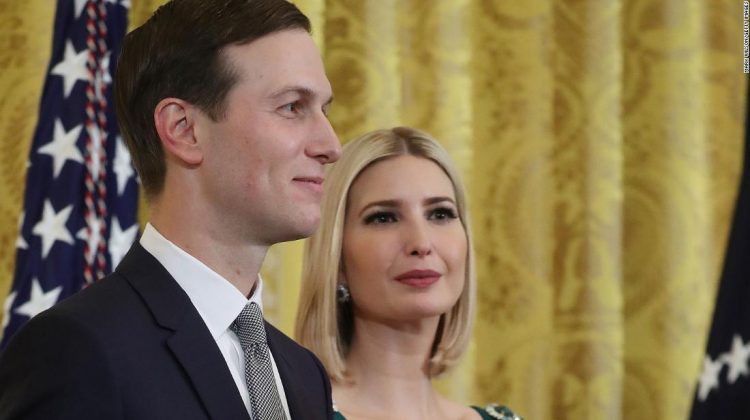 “With each passing day away from Washington, former President Donald Trump’s grievances continue unabated. And those complaints appear to be driving away two of the people who were closest to him during his White House tenure: his daughter Ivanka Trump and son-in-law, Jared Kushner.”

In fact, the attempted ghosting of the former President by his eldest daughter and son-in-law is the most utterly predictable thing imaginable. Because while Donald Trump has never really tried to hide who he is — in all its boorish egocentricity. He is about him — and doing what is best for him. Period. Totally transactional.

Ivanka and Jared, on the other hand, have always (always!) tried to have it both ways. Yes, they are related to Donald Trump — and, yes, they want all the benefits and access that comes with that. (That’s always been true, but especially since Trump was elected.) At the same time, they want to preserve their access to, for lack of a better word, high society. Jared and Ivanka still want to be liked by the intelligentsia. They want to have access to important places and travel in the circles of the wealthy and well-connected.

In short: Jared and Ivanka wanted all the benefits of being in the Trump orbit with none of the downside. Which, um, isn’t a thing.

There’s a long history of “Javanka” acting this way.

Who could forget the earliest day of the Trump administration — and even in the weeks and months leading up to his swearing-in — when Ivanka and those around her insisted that she would be a moderating influence on her father’s worst instincts?

Here’s The New York Times on Ivanka’s role way back in May 2017:

“In interviews last week, she said she intended to act as a moderating force in an administration swept into office by nationalist sentiment. Other officials added that she had weighed in on topics including climate, deportation, education and refugee policy.

“Even as Ms. Trump said she was seeking to exert more influence, she acknowledged she was a novice about Washington. ‘I’m still at the early stages of learning how everything works,’ she said, ‘but I know enough now to be a much more proactive voice inside the White House.'”

By September 2017, Ivanka was already walking away from that moderation pledge:

“Some people have created unrealistic expectations of what they expect from me,” the First Daughter told the Financial Times in an interview published online Thursday. “That my presence in and of itself would carry so much weight with my father that he would abandon his core values and the agenda that the American people voted for when they elected him. It’s not going to happen. To those critics, shy of turning my father into a liberal, I’d be a failure to them.”

And repeatedly during her father’s presidency, Ivanka and Jared found ways to make themselves scarce when things went south.

This, from CNN’s Gregory Krieg in 2018, illustrates that point:

[Kushner’s] disappearance, along with Ivanka Trump and the family, at critical (or embarrassing) moments at the outset of Trump’s presidency also helped replace the ideal of the couple with a kind of slapstick. As an early Obamacare repeal effort sputtered on Capitol Hill, they turned up in the mountains, quite literally, of Aspen, Colorado, on a ski trip. They were away too, in Vermont, when Trump imploded following the violence in Charlottesville, Virginia. The list goes on.”

Jared and Ivanka have, candidly, always been the have-our-cake-and-eat-it-too types. It’s in keeping with that, um, approach that the duo is now trying to create some space between themselves and the former President as he continues to go further and further down the rabbit hole of conspiracy theories about election fraud in the 2020 campaign.

“A large part of the reason for the separation is Trump’s constant harping on the past and his inability to move on. The former President has also started to question the role that Kushner — one of the few people who were able to stay close to Trump throughout his two presidential campaigns and White House tenure — has played in his presidential legacy.”

That, too, is predictable. While Jared and Ivanka look to protect their own personal brands from the ravages of Trump’s flights of fantasy, the former President looks for people to blame for his losses — and his current standing in the country.

None of this should surprise us — or Ivanka, Jared or the former President. This is who they all are and who they have always been. And, no, it’s not a pretty sight to see.