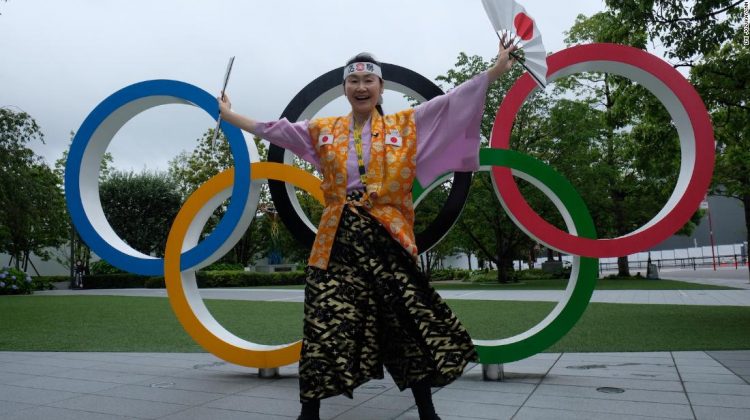 Sporting a bandana, fans, whistle and traditional Japanese costume, the IT company president is a superfan who has attended every Summer Games since Barcelona 1992.

She even performs a Japanese cheer routine at each one and hopes to carry on the tradition this year.

“The purpose of my cheer activities is to share the message of love, friendship, and peace,” said Ishikawa, who is a self-acclaimed “international (Olympics) cheerleader.”

“The Games are the one opportunity where we can share that with people from around the world.”

Ishikawa might be upbeat; however, with just one month until the opening ceremony of the Summer Games on July 23, many in Japan are still not convinced by assurances from the government and organizers that it’s possible to stage the Games safely.

Earlier in June, a British medical journal called for a “global conversation” on staging the Olympics. And a recent poll from Kyodo News found 86% of 2,000 people surveyed feared a rebound of Covid-19 cases if the mega event went ahead.
While overseas spectators were barred from coming to the Games earlier in March, just this week, Tokyo 2020 organizers agreed to allow up to 10,000 fans at events, providing the number does not exceed 50% of venue capacity.

That has left ticket holders like Ishikawa hopeful they’ll still be able to experience — in person — an Olympics like no other.

Usually at the Olympics, hordes of international fans pack stadiums and host cities.

The number of attendees can be staggering — for instance, a total of 8.3 million tickets were sold for the 1996 Games in Atlanta, Georgia, according to Guinness World Records. In comparison, 4.45 million tickets were initially sold for Tokyo 2020 but 840,000 were refunded after the postponement.

Ishikawa says she got hooked on that buzz from the crowds when she went to her first Olympics in Barcelona in 1992 as a student. It’s also where she met Naotoshi Yamada — or “Uncle Olympics” — who was known to have attended every Summer Games since Tokyo 1964 in his colorful Japanese costumes.

The pair hit it off and kept meeting up at every Summer Games. They were even planning to celebrate Tokyo 2020 together until Yamada died, age 91, in 2019.

Ishikawa, determined to continue Yamada’s legacy, is a fan who counts on showing her support vocally.

Others, however, communicate their fervor for the Games through mementos.

Namely Shlomi Tsafrir, an Olympics memorabilia collector who has an archive of over 100,000 artifacts and knick-knacks. He’s been hooked on the Olympics since 1998 when he opened a souvenir shop and loves using his collection as a talking point.

“I want more people to be interested in the history of the Olympic Games. Many of my Olympic memorabilia items come with a fascinating story behind them,” said Tsafrir.

Since the Games’ postponement in March last year, organizers have coordinated preparations for holding the major international event amid the coronavirus pandemic.

Japan’s vaccination rollout has ramped up significantly in mid-June, with large-scale vaccination centers accepting bookings for people between ages 18 and 65, and an increasing number of companies and universities offering inoculations on site.

Despite this, Japan’s top coronavirus adviser said on June 18 that staging the Tokyo Olympics without spectators is “desirable” as it would be the lowest risk option amid the pandemic.

Responding to his concerns, Tokyo 2020 organizers and Japan’s Prime Minister Yoshihide Suga said this week they would not rule out an Olympics without spectators if a state of emergency is reinstated in Tokyo.

While Tsafrir still hopes he can go to the Games, he — like Ishikawa — must wait to find out if he’s among the lucky ones who can enter Olympic venues. Tokyo 2020 organizers will hold a fresh lottery to decide who will be able to watch in person for events with over 50% of the venue capacity already filled.

For Tsafrir, who likes to visit different Olympic cities and towns to acquire memorabilia, a successful Games sends a message to the world that life can resume, and that other big cultural and sporting events might come back in the future.

Tsafrir has table tennis and swimming tickets but said he wouldn’t be too disappointed if he can’t watch the events at the venues.

“Most people in the world will be watching the Olympics at home — and sometimes watching it on TV, you can get a better angle than sitting in the stadium,” Tsafrir added.

TV viewership is crucially important for the International Olympic Committee (IOC), which draws 73% of its funding from broadcasting rights.

With medical experts warning of a resurgence of coronavirus as people move around the country, both Japan’s leader and top Covid-19 expert have urged people to try and watch the Games from home to prevent the spread of the virus.

“There are technologies that can create the feeling of being (at the Olympics) — we can stream (the Games) to the world and create a new way of cheering. I think Japan can create a new model for that,” Shigeru Omi, an infectious disease expert, said in a news conference last Friday.

And it’s not just medical experts and officials who are trying to find ways of adapting to a streamlined Games.

Surrounded by Olympics paraphernalia at her home in Tokyo, Ishikawa is pondering how she’ll make her brand of fandom work in a socially distanced world.

“We cannot meet face-to-face, but currently, we have technologies that still link and connect with the people from around the world. I’m thinking of how we can utilize that.”

CNN’s George Ramsay contributed to this report from London.