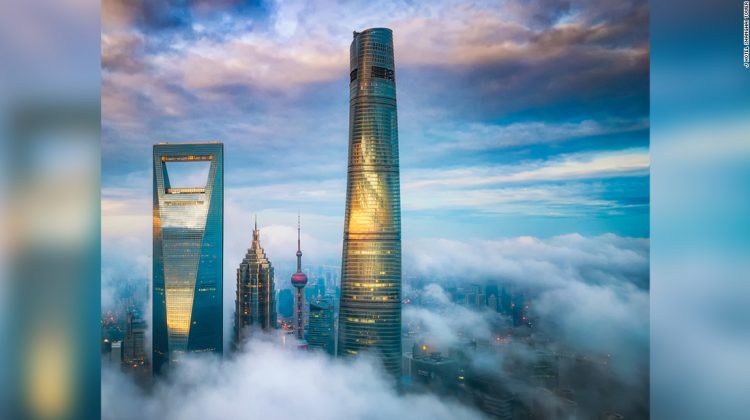 It claims to be the highest hotel in the world. The J Hotel occupies the top floors of the Shanghai Tower — which at 632 meters (about 2,000 feet) is the tallest building in all of China.

Aside from impressive bragging rights, what is the hotel actually like? The J has 165 rooms, of which 34 are suites. There’s 24/7 personal butler service, an indoor swimming pool, toiletries by Hermes and Diptyque, magnolia petal-shaped bathtubs, a luxe spa with a focus on Reiki treatments and full Chinese tea sets in every room.

The hotel has four suites, with the most expensive being the 380 square meter Shanghai Suite. Besides the bedroom, this suite includes a parlor, study, kitchen, physiotherapy area and a room just for getting dressed. (The hotel did not reply to CNN Travel’s request for a price.)

There are also seven different places to eat within the hotel including a Cantonese restaurant called Heavenly Jin on the top (that would be 120th) floor. There are also restaurants offering Japanese food, Italian food and afternoon tea.

Jin Yan, one of the hotel restaurants, is decked out in traditional Chinese red.

The J Hotel is owned by Jin Jiang International. One of China’s largest hotel and tourism enterprise groups, it’s part of the state-owned Assets Supervision and Administration Commission.

Despite the global travel slowdown amid the coronavirus pandemic, competition for the newest, best and highest hotel isn’t going anywhere.

A view of the J Hotel’s pool.

In Dubai, there’s an ongoing battle for the title of tallest hotel in the city and on the planet.
The 356-meter (1,168 feet) Gevora Hotel was officially recognized as the world’s tallest hotel by the Guinness Book of World Records in 2018.

It’s worth noting the title of tallest hotel is typically applied only to buildings used wholly as hotels, unlike the J Hotel, which only occupies an upper section of the Shanghai Tower.

Hot on Gevora’s heels is the still-under-construction Ciel Tower, which will have 1,042 rooms and reach a height of 360.4 meters when it’s completed.

Unlike some of the other hotels on this list, the Ciel (French for “sky”) is slated to have a glass rooftop observation deck, which will give non-guests an opportunity to experience the view for themselves.