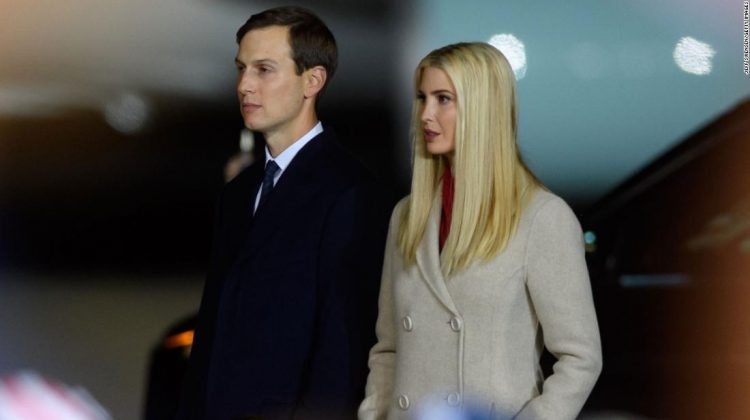 A large part of the reason for the separation is Trump’s constant harping on the past and his inability to move on. The former President has also started to question the role that Kushner — one of the few people who were able to stay close to Trump throughout his two presidential campaigns and White House tenure — has played in his presidential legacy.

Having spent much of the last five-and-a-half years in close proximity to him, Ivanka Trump and Kushner were rarely seen with him in the months leading up to the former President’s seasonal shift from living at Mar-a-Lago in Palm Beach, Florida, to living in a cottage at his private golf club in Bedminster, New Jersey.

“They weren’t around for the usual spring and summer events at Mar-a-Lago,” says one clubgoer and family friend, noting the absence of Trump’s elder daughter and the couple’s three young children.

Simultaneously, the disappearance of Kushner — once the ringleader of Trump’s policy operations — was also apparent. A person familiar with Kushner says there were visits from the Kushner/Trump family to Mar-a-Lago before Trump’s move North, but they were sparse, averaging once every three to four weeks. The physical distance between them was not far: after leaving Washington, Kushner and Ivanka Trump moved to a Miami high-rise to await the construction of their mansion on a nearby private island.

Kushner’s presence, physically and virtually, has become increasingly rare as it became clear that his father-in-law remained preoccupied with the 2020 election, according to one person familiar with the situation.

“He was kind of like a parent who sticks around less and less each morning while they’re transitioning their kid to day care,” this person said.

Kushner moves to the side

It wasn’t the distance that kept Kushner away, say those who know his thinking — it was the desire to be far from Trump’s constant stream of contempt, and the chorus of voices cheering him on.

“Trump always has an array of characters around him,” says a person who worked in the administration.

Around mid-March, some of Trump’s most trusted advisers began urging him to bring someone onto his team who could oversee daily operations and help organize his candidate meetings, fundraising requests and endorsement vetting process.

“I don’t think it’s accurate to say he needed a new Jared, because Jared was always more of a policy guy inside the White House, but there was definitely a sense that some part of the puzzle was missing and it was contributing to a lot of internal confusion and chaos,” said a former White House official.

Eventually, Trump brought on Susie Wiles, a Florida-based consultant who had earned his trust and was a familiar face to others on his payroll. But the frequency of Wiles’ appearances, as well as her overall involvement, has also decreased since Trump relocated to Bedminster for the summer, according to one of the people involved with his operation.

Another consistent presence is that of Donald Trump Jr, whose penchant for politics has grown in the years since his father entered the political scene and who has become an increasingly trusted adviser to the former real estate mogul.
Kushner is not helping Trump cook up plans for a rally later this month, nor is he intensely involved with the former President’s endorsement decisions or frequent public statements, which, sans a social media presence, come via news releases from Trump’s leadership PAC, Save America — again, something Kushner has veered away from.

Without input from his elder daughter and her husband, Trump is isolated from their influence, though the person close to Kushner does note he “still speaks on the phone” to the former President.

Now Trump finds himself more often in the company of an ever-changing circle of advisers. Trump allies say he is once again interacting with characters who should require supervision — noting that he has been in frequent touch with One America News anchor Christina Bobb, a prolific proponent of far-fetched theories about the 2020 election, in addition to MyPillow CEO Mike Lindell, who has encouraged Trump to keep challenging the 2020 election results in several states.

A member of Trump’s team tells CNN the former President has “always had siloed relationships” with various people and that even in the White House — with Kushner ostensibly down the hall — Trump could frequently be “running his own play.” This person notes Trump’s cadre of recent influencers is akin to his unconventional way of eliciting opinion.

“There are other circles around him, yes,” says this person, who doesn’t argue there are questionable characters in the ear of the former President, “but that doesn’t mean he doesn’t also have very reasonable and buttoned-up people there as well.”

The person close to Kushner adds that the group off whom Trump bounces his most off-the-wall and questionable theories is, while conspiratorial in nature, not completely out of the realm of a host of “regulars” with whom he has held court over the years.

“The stakes [now] are also less than they were when he was in the White House,” says the source.

Trump has privately started to question Kushner’s contributions to his legacy. One person who spoke with the former President in the last two weeks recounted a conversation in which Trump complained about Kushner inking a book deal that he thinks his son-in-law will use to take credit for some of his achievements.

Another source confirms there is jealousy from Trump about Kushner’s book, which a Kushner associate says was a “seven-figure deal” with Broadside Books, the conservative branch of mega-publisher HarperCollins. Trump, who has lately been helping with several journalists’ in-the-works books about his presidency, has yet to announce a deal of his own.

“He’s always been suspicious of Jared,” this person said, noting that Trump has previously discounted Kushner’s role in some of the key policies he enacted as president, including Middle East peace deals and criminal justice revisions.

Two people familiar with conversations Trump has had since his arrival in May at Bedminster say he questioned whether Kushner “accomplish[ed] peace in the Middle East after all” after tensions between Israel and Hamas erupted into a violent series of airstrikes last month.

“It is not a secret President Trump doesn’t like when he thinks other people are getting attention for something he feels he has facilitated,” says another former Trump White House official. “There’s a sweet spot between saying nothing about work you did and saying too much that everyone has to find — or else he gets triggered.”

A person who works with Trump now disputes that the former President has been vocal about disloyalty to Kushner, noting that several of the authors who have interviewed the former President for their books have asked directly whether Trump blames Kushner for his election loss.

“Every time, he’s answered definitively, ‘no,’ on the record,” says the person.

Those close to Kushner laugh off the idea of an estrangement, saying Trump is provocative at times because that is who he is. They note Kushner is long used to the occasional Trump backlash, and it doesn’t bother him.

“He knows Trump acknowledges his successes,” says the person close to Kushner.

Still, the Kushner intimates make no bones about the fact that the couple disagrees with the former President’s current pursuits. It’s clear that the close advisory relationship is no more.

The distance Kushner and Ivanka Trump have put between their current life and the former President has also helped, but that gap that is soon to close.

For the last week, Kushner, Ivanka Trump and their children have been on a summer road trip, from Miami to, eventually, Bedminster. It’s the sort of summer activity millions of American families partake in, but the Kushner clan has made stop-offs along the way with a who’s who of Trump’s former administration.

Over the weekend, they were in Kiawah, South Carolina, staying with former US Ambassador to the United Nations Nikki Haley, who has made no secret of her desire to run for president but remains estranged from Trump’s inner circle after publicly criticizing his response to the 2020 election. The Kushners and the Haleys were spotted on a double date at a popular local restaurant. Haley said in April that she would not make a run for the White House in 2024 if Trump decides he will run — or she would at least discuss that scenario with him.

Haley, like the Kushners, added that she has put space between herself and the former President, noting she had not talked to him since after the election but before the January 6 storming of the Capitol by a mob of his supporters.

The source close to Kushner downplayed the visit with Haley, saying South Carolina was just “one of the states along the way” on their drive.

Monday found them in Nashville, paying a visit to former State Department spokeswoman Morgan Ortagus, a close friend of Ivanka Trump’s and frequent guest on Fox News. During the Trump administration, Ortagus worked for then-Secretary of State Mike Pompeo, who has in recent months toyed with the idea of a run for the White House.

The Kushner family will eventually get to their East Coast digs, and the person close to Kushner noted they will also spend time at their old apartment in New York City, in addition to Bedminster. They’ll also perhaps visit the Hamptons, the summer playground of the rich and connected.

In Bedminster, the Kushner cottage and the Trump cottage are separated by mere tens of feet, about as close as the families have been for an extended period since the White House. Kushner’s allies say that won’t be a problem for him, as the two men are “not at odds,” as one describes their relationship. Another friend of Kushner’s says the men have a “good relationship, but [Kushner] is not anywhere near his political orbit.”

Things might be slightly more challenging for Ivanka Trump, though, who has for the last several months walked a tightrope between Trump, her father, and Trump, the wounded loser of a contentious election.

For the time being, she is not getting involved in the rhetoric, nor the unknowns that could be on the horizon for her father — politics, business, relationships or investigations.

“She is being very present, in the moment,” says a person who has worked closely with her for the last several years. “She’s not concerned.”

Explaining why the former President’s life is not simpatico with his daughter’s, one of the people close to Kushner said, “She is focused on her children, and spending time with them, period.”

“Listen, you lose an election, things happen, people get over it, they move on, these are natural consequences,” says the friend of Kushner’s.

The person familiar with Trump’s thinking insists no one has been “removed” from his inner circle and that whatever the status of the relationship, the blurred lines among employee, adviser and son-in-law exist because they’ve both made them such.

“This is family, and family is in its own category. Its own unique category,” the person said.