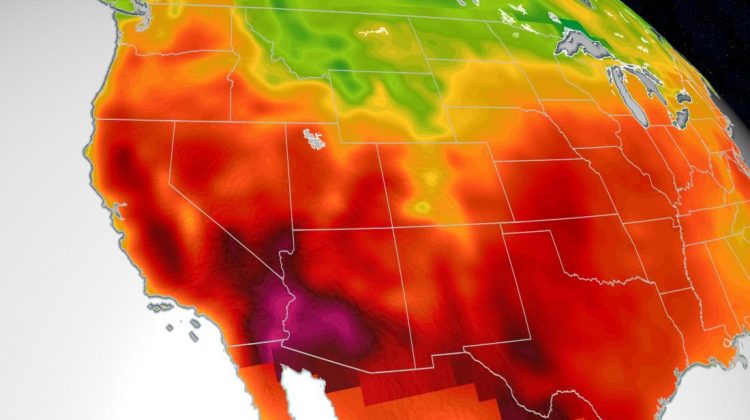 Even by desert standards, the heatwave in the Southwest is atypical. On Thursday, the National Weather Service (NWS) in Tuscon tweeted that the city recorded a temperature of 100 degrees at 8:14 am — the second earliest time in the day recorded since 1948.

High heat so early in the day have reinforced the need for the excessive heat warnings that have been in place throughout Arizona, Nevada, Utah and California all week.

On Friday morning, Phoenix recorded a low temperature — yes, a LOW temperature — of 92. This is a problem, because it doesn’t allow the body to successfully cool down at night.

The temperature needs to drop to at least 80 degrees for recovery to begin. In fact, a person can lose up to 2 liters of fluid overnight through sweating if the temperature never drops below 85 degrees.

Half a dozen western states will have morning low temperatures between 10-20 degrees above normal through Sunday.

Find out how hot it will get where you are>>

The National Weather Service issues heat advisories and warnings, with safety as their top priority.

Heat is the number one cause of weather-related deaths in the US, and providing guidance about the likelihood of heat-related ailments — including heat cramps, heat exhaustion, stroke and possibly death — helps protect the public in extreme heat events.

Numerous heat records are being smashed

Record-breaking temperatures spread from California to Montana this week. Thursday, the all-time high temperature was tied in Palm Springs, California at 123 degrees, breaking the previous June record of 122 degrees.

Salt Lake City also tied their all-time record high of 107 degrees. The old record was notably set in July — when temperatures are usually at their highest for the year in that region. This comes after daily record highs were broken Sunday, Monday and Tuesday in Salt Lake, each with temperatures exceeding 100 degrees.

Records are kept for all-time highs (and lows), and also record high or low temperatures for specific months.

Death Valley, California shattered its record high daily temperature for Thursday at 128 degrees — the previous record was 122 degrees set in 1917 — and was just one degree shy of tying the record for the month of June. The hottest recorded temperature in Death Valley was 134 degrees in July of 1913.

Las Vegas set two daily records this week after falling just one degree short of their all-time record of 117 degrees on Wednesday.

Denver also hit 100 degrees Thursday marking only the 6th time in historical record keeping that they have reached 100 on three or more consecutive days.

Weekend stays hot for the West

From Sunday to Tuesday alone, 159 maximum daily high temperature records were broken, according to NOAA . Over 50 additional records could be broken through Sunday in many of the same states that had them earlier in the week.

Temperatures will remain 10 to 20 degrees above average through the weekend for much of the West.

The good news is that the heat begins to wane by the start of next week across the Southwest. By Wednesday, the heat breaks a bit in the Pacific Northwest as well.

However, since we are only just two weeks into meteorological summer, long-term cooler temperatures aren’t expected for quite some time.