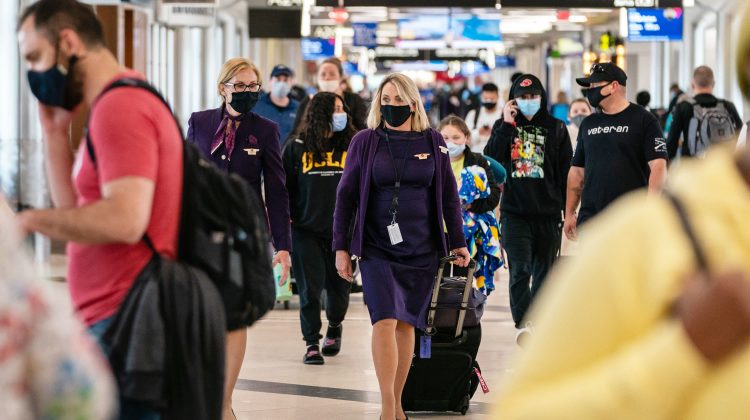 Air travel demand is rising, and so is bad behavior on flights. Now airline industry groups, flight attendants and lawmakers want the government to do more to stop it.

The Federal Aviation Administration says it has received about 3,000 reports of unruly passenger behavior from airlines since the start of the year. The agency implemented a “zero-tolerance” policy and threatened fines of up to $35,000 earlier this year, after a series of politically-motivated incidents on flights and airports around the time of the riot at the U.S. Capitol on Jan. 6.

The FAA has so far recommended civil penalties topping $360,000, according to airline industry figures, though recent agency releases describe incidents that allegedly occurred back in February, meaning there are likely more cases, and fines, yet to be disclosed.

Flight attendant unions say their members  have been subjected to insults and yelling from passengers, some of them intoxicated, and in some rare cases violence. A Southwest Airlines flight attendant lost two teeth after she was allegedly punched by a passenger while working a flight last month, according to the labor union. Several captains had to divert or turn planes around this year because of disruptive or violent incidents on board.

“It’s out of control,” said Paul Hartshorn, spokesman for the Association of Professional Flight Attendants, which represents American Airlines’ more than 20,000 cabin crew members. “It’s really coming to the point where we have to defend ourselves.”

Airline executives note that the cases are rare considering the number passengers they are carrying. Transportation Security Administration airport screenings recently topped 2 million a day, the highest since before coronavirus was declared a pandemic in mid-March 2020.

But the issue adds to flight attendants’ stress after a year of job insecurity and health concerns from working in a pandemic, said Sara Nelson, a prominent labor leader and international president of the Association of Flight Attendants-CWA, the largest flight attendant union with some 50,000 members across more than a dozen airlines.

“Even if it doesn’t rise to the level of a physical altercation, just the constant bickering and name-calling and disrespect, that wears away at people,” she said.

Most of the cases are related to passengers’ refusal to wear masks on board, which the Biden administration mandated earlier this year, though airlines have required it since early in the pandemic. The administration extended it through mid-September.

There isn’t one single reason behind the incidents, but entitlement is a common thread in displays of anger, according to Ryan Martin, a psychology professor at the University of Wisconsin-Green Bay, who has studied anger for about two decades and is the author of “Why We Get Mad: How to Use Your Anger for Positive Change.”

“What we know is that entitlement is correlated with anger, meaning the more entitled you are the angrier you get,” said Martin.

Another factor behind disruptive behavior could be readily available examples of others acting similarly online, he said.

“We’ve seen lots and lots of example of people losing their cool and having what I would call tantrums in the last year, very publicly,” Martin said. “Some of that may have modeled a way of dealing with problems for people that isn’t really a healthy, reasonable way to deal with problems.”

Increased anxiety returning to travel might also have heightened tensions, he added, though he noted that one of the better indicators for whether someone will turn violent is that they believe in violence to solve problems in the first place.

Pleas to do more

Sen. Jack Reed, D-R.I., plans to introduce legislation before the end of this month “that would cover abusive passenger behavior on board flights” and against TSA officers, spokesman Chip Unruh told CNBC.

On Monday, Airlines for America, which represents most large U.S. airlines, along with several industry labor unions, wrote Attorney General Merrick Garland urging him to direct the Justice Department to “commit to the full and public prosecution of onboard acts of violence.”

At a hearing last week, Rep. Bennie Thompson, D.-Miss., chairman of the House Homeland Security Committee, and Rep. Sheila Jackson Lee, D-Texas, asked Homeland Security Secretary Alejandro Mayorkas on what the agency is doing to combat the assaults and other unruly behavior on planes and at airports.

“We also have prepared Federal Air Marshals to address any act of violence that they themselves observe while on flights,” Mayorkas said. “Importantly, we are working with law enforcement to ensure that these acts are met with the full force of federal law. These individuals who commit these heinous acts are prosecuted to the full extent of the law.”

Nelson, the union leader, says a currently voluntary TSA self-defense course for flight attendants should be part of their paid, mandatory training provided by airlines.

Southwest Airlines and American Airlines last month delayed plans to resume alcohol sales for much of the cabin, while United Airlines scaled it back, at the urging of flight attendant unions, following the alleged attack on the Southwest crew member.

Brady Byrnes, managing director of flight service at American, told staff: “We also recognize that alcohol can contribute to atypical behavior from customers onboard and we owe it to our crew not to potentially exacerbate what can already be a new and stressful situation for our customers.”

A bar at Dallas/Fort Worth International Airport. May 28, 2021

Both Nelson and Hartshorn, the American Airlines flight attendant union spokesman, said it’s key to keep intoxicated travelers off planes. Some gate agents remind travelers that can’t bring their own alcohol on board before they begin allowing travelers on flights.

“At the gate we can handle it but at 35,000 feet that becomes a serious problem really quickly,” said Hartshorn.

One tactic for dealing with a disruptive passenger can be moving them to another seat, but planes are flying fuller, leaving fewer options, she said. Catering services have also been limited during the pandemic, so offering passengers food or a beverage to try to calm them down is not always possible.

Clearer messaging about the rules and consequences, from airport bars to public officials is important, however, she added.

FAA Administrator Steve Dickson, a former Delta pilot, has made several media appearances, including last week on TMZ, to try to warn travelers about stiff fines and potential jail time for disruptive behavior or violent behavior, and the agency has posted frequently on social media warning travelers to behave or face consequences.

One Dallas/Fort Worth International based-American Airlines flight attendant told CNBC the increase in unruly passenger has discouraged her from pressing passengers to wear masks if they refuse.

“If I see it get heated, I’ll back away,” said the flight attendant, who spoke on the condition of anonymity because she was concerned it could jeopardize her job. She said she hasn’t experienced an unruly traveler but added “I think it’s a matter of time.”