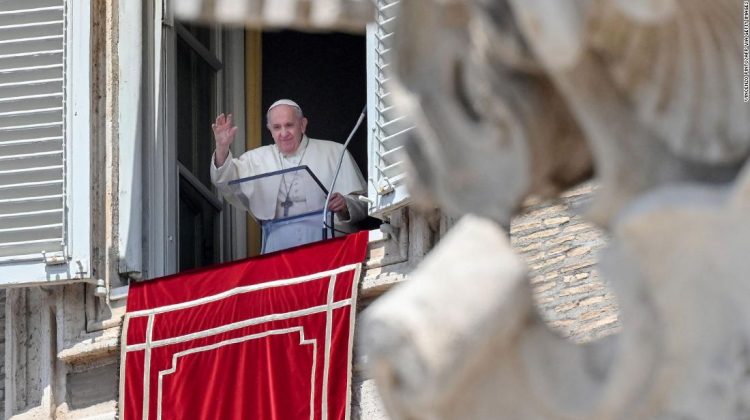 The Italian “parliament is sovereign and won’t accept interference,” the President of Italy’s lower house of parliament, Roberto Fico, a member of the governing coalition, said on Italian TV Wednesday morning.

The Vatican has invoked its sovereign status under a 1929 treaty with Italy to protest the draft legislation, arguing that it could restrict the religious freedom guaranteed the church under that accord.

Alessandro Zan, an openly gay legislator who introduced the bill — known in Italy as the “Zan bill” — said it “was approved by a branch of parliament with a large majority, and the process has not yet been completed.”

“All concerns must be heard and all doubts dispelled, but there can be no foreign interference in the prerogatives of a sovereign parliament,” Zan tweeted on Tuesday following the Vatican’s protest.

Italian Prime Minister Mario Draghi has said he’ll take questions from parliament about the issue on Wednesday. The legislation is currently under consideration by the Italian senate.

The Vatican’s concerns were expressed in mid-June in a nota verbale, meaning a formal diplomatic communique, presented by British Archbishop Paul Gallagher, the Vatican’s foreign minister, to the Italian Ambassador to the Vatican, Pietro Sebastiani.

The contents of the note were first reported by the Italian newspaper Corriere della Sera, and confirmed to Catholic news site Crux by a Vatican official informed on the matter.

While the Lateran Pacts — which created the Vatican City State after the loss of the Papal States amid Italian unification in the 19th century — afford the Vatican the opportunity to assert its rights to the Italian government, this marks the first time the Vatican has used that provision to object to a draft piece of legislation before it’s adopted.

According to a 1984 update of the 1929 Lateran Pacts, the Catholic Church in Italy is to be guaranteed “freedom of organization, of public exercise of worship, of the exercise of the magisterium and episcopal ministry,” as well as “full freedom for Catholics and their associations and organizations to meet and to manifest their thought in words, in writing and every other means of communication.”

Critics say the anti-homophobia measure could require private Catholic schools to adjust curricula to adopt state-mandated lessons on tolerance and gender, and it could also criminalize some public expressions of Catholic teaching on sexuality and marriage.

But Fabrizio Marrazzo, a spokesperson for gay-rights group Gay Party for LGBT+ Rights, said in a tweet the draft law was “already a compromise with poor protection” and called the Vatican’s protest a “field invasion on the lay state.”

“We find this interference by the Vatican on the Law Against Homotransbiphobia worrying,” Marazzo said in a longer statement on the party’s website.

“The majority that supports the law, and the Government and Draghi say a clear NO to the Vatican and improve the law.”

It’s not clear what the immediate implications of the Vatican protest might be. But the leader of Italy’s main center-left party, Enrico Letta, said Tuesday that while its “design” should be maintained, his Democratic Party — which is a major proponent of the bill — is ready for “dialogue” over the “legal issues.”

Theoretically, should the proposal be adopted without satisfying the Vatican’s concerns, the Lateran Pacts envision the creation of a joint commission between Italy and the Vatican to resolve the dispute.

Although Pope Francis is known for a generally accepting stance toward gay and lesbian issues, the new Vatican protest appears consistent with his repeated objections to what he calls “gender theory,” which he sees as a leading cause of what he’s described as “ideological colonization.”

One recent expression of that view came in an interview book between the pontiff and an Italian priest released last year, in which the priest asked Francis where he sees evil at work today.

“One place is ‘gender theory,'” the pope said, adding that he wasn’t talking about efforts to fight discrimination based on sexual orientation.

Gender theory, Francis said, instead has a “dangerous” cultural aim of erasing all distinctions between men and women, which would “destroy at its roots” God’s plan for human beings. “Diversity, distinction. It would make everything homogenous, neutral. It is an attack on difference, on the creativity of God and on men and women,” he said.

In 2019, the Vatican’s Congregation for Catholic Education issued a document — titled “Male and Female he Created Them” — criticizing gender theory, including “calls for public recognition of the right to choose one’s gender, and of a plurality of new types of unions, in direct contradiction of the model of marriage as being between one man and one woman, which is portrayed as a vestige of patriarchal societies.”

The Vatican’s diplomatic protest also builds on objections to the Zan bill expressed by the Italian bishops’ conference, CEI, last June and as recently as this past April, when Cardinal Gualtiero Bassetti, president of the conference, said that “a law intended to fight discrimination cannot, and must not, pursue that objective with intolerance.”

Although polls vary, most show that somewhere between half and two-thirds of Italians say they support the Zan bill. It’s backed by the country’s current governing coalition but opposed by center-right parties, especially the populist Lega party led by former deputy prime minister Matteo Salvini.

The bill was approved by Italy’s lower chamber of parliament last November and is currently before the justice commission of the Italian Senate.