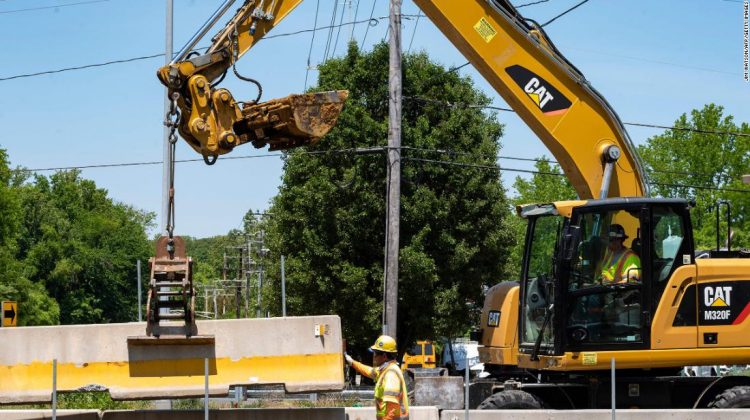 While many details of what it contains remain unclear, the total cost of the proposed deal announced Thursday is $1.2 trillion over eight years, with $579 billion in new spending, according to a fact sheet provided by the White House.

That is far short of the $2.25 trillion plan Biden unveiled in March. That plan included money for roads, bridges, public transportation, airports, water and power systems as well as broadband improvements. It also would have made investments in caregiving for aging Americans and in workforce training — drawing criticism from many Republicans, who wanted to stick to classic infrastructure items.

Democrats say they are still planning to push some of the provisions left out of the infrastructure plan through separate legislation.

The new bipartisan proposal emerged this week after the breakdown of an earlier round of bipartisan negotiations with a group of Republicans led by West Virginia Sen. Shelley Moore Capito.

Here’s what we know about it so far:

Funding for roads and bridges

The bipartisan plan includes $109 billion for roads, bridges and other infrastructure projects — significantly less than the $159 billion Biden initially requested for these investments.

Another $55 billion would be invested in water infrastructure and $73 billion in the nation’s power structure.

Some of this money would be used to eliminate the nation’s lead service lines and pipes.

The plan would provide $65 billion to make improvements to the country’s broadband system.

Biden initially wanted to spend $100 billion to make sure every American has reliable, high-speed internet service. But said he was willing to lower his ask in earlier negotiations with Republicans.

It includes $7.5 billion to build a network of electric vehicle chargers along highways and in rural and disadvantaged communities. The goal is to build 500,000 chargers.

Another $7.5 billion would go toward making thousands of school and transit buses electric.

How Congress will pay for it

The full details on how the package would be paid for remain to be seen, but the bipartisan proposal focuses on using unspent funds from prior relief packages, as well as revenue from selling off strategic oil reserves.

Lawmakers believe that they could bring in more than $100 billion from unspent pandemic unemployment benefits funding and from pursuing fraudulent jobless payments. Whether these measures would provide that much money is questionable.

At least 26 states have said they would end at least one of the pandemic unemployment benefits programs — including the $300 weekly federal boost — early in order to address widespread worker shortages. Congress extended the three programs through early September in the Democrats’ $1.9 trillion relief bill that was enacted in March.

Estimates of the value of the unspent benefits vary. The Century Foundation has pegged it at more than $22.5 billion.

Unemployment fraud has also been a major issue since the pandemic began, with criminals targeting the more generous payments provided by Congress’ historic expansion of the nation’s unemployment system.

Again, estimates vary widely. The US Department of Labor Inspector General Office in late March estimated that at least $89 billion of the projected $896 billion in federal unemployment program funds could be paid improperly, with a significant portion attributable to fraud. The head of an identity verification company told Axios recently that as much as 50% of all unemployment claims — more than $400 billion — could be fraudulent.
The US Secret Service last month helped recover around $2 billion in fraudulently obtained Covid-19 relief funds, including unemployment benefits and aid to businesses, and seized more than $640 million from accused fraudsters, the agency said last month.
RELATED: Were half of Covid unemployment benefits stolen? Here’s what we know

The bipartisan proposal also calls for repurposing $80 billion in Covid relief funds, mainly from the March and December rescue deals.

Biden’s original plan also called for ramping up enforcement against corporations to ensure they pay their fair share of taxes. The Congressional Budget Office has estimated increasing funding for enforcement would raise about $60 billion. Lawmakers negotiating the bipartisan deal estimated that it would yield more than $100 billion.

The deal appears to set aside Biden’s effort to pay for the plan by raising taxes on businesses. He had proposed hiking the corporate income tax rate to 28%, from 21%, and increasing the global minimum tax rate on US corporations to 21%, among other changes. Republicans, however, strongly opposed the idea.

The deal leaves out Biden’s proposal to spend $400 billion to bolster caregiving for aging and disabled Americans — the second largest measure in his original package.

His plan would have expanded access to long-term care services under Medicaid, eliminating the wait list for hundreds of thousands of people. It would have provided more opportunity for people to receive care at home through community-based services or from family members.

It would also have improved the wages of home health workers, who now make approximately $12 an hour, and would have put in place an infrastructure to give caregiving workers the opportunity to join a union.

Also left on the sideline: $100 billion for workforce development, which would have helped dislocated workers, assisted underserved groups and put students on career paths before they graduate high school.