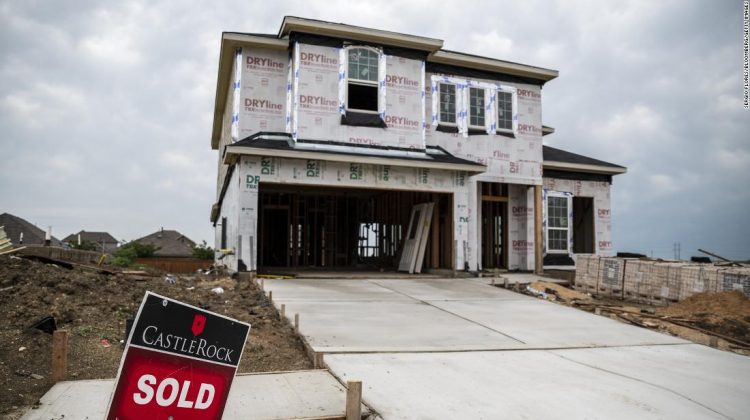 Despite surging home prices that are rising at the fastest pace on record, the Federal Reserve continues to prop up the housing market by purchasing $40 billion of mortgage bonds each month.
And while the Fed is finally “talking about talking about” removing some of its support, some fear the US central bank is creating another housing bubble as it deliberates.

That’s because the Fed’s emergency strategy is artificially lowering the cost of mortgages, and further boosting prices that already looked stretched in many markets.

Of course, the central bank certainly deserves credit for its historic efforts to prevent the Covid recession from morphing into an all-out depression.

Springing into action early last year after the pandemic hit, the Fed rapidly slashed interest rates to zero, launched emergency programs to unfreeze credit markets and promised to buy a staggering $120 billion of Treasury and mortgage bonds a month.

That unprecedented support, along with trillions of dollars of stimulus from Congress and the Trump and Biden administrations, set the stage for a rapid recovery.

But given how fast the economy is rebounding and the fact that inflation is surging, it may be time for the Fed to start tapping the brakes — at least on its bond-buying program.
Federal Reserve Chairman Jerome Powell acknowledged during his Wednesday press conference that the jobs market is likely to be “very strong” in the near future and there is a risk that inflation isn’t going away as quickly as many economists think it will.

“Forecasters have a lot to be humble about. It’s a highly uncertain business,” Powell said. “We’re very much attuned to the risks and watching the data carefully.”

The data in the housing market are off the charts.

The median sale price for a home hit a record $341,600 in April — the highest since the National Association of Realtors began tracking the numbers in 1999. Moreover, single-family home prices soared by 20% from last year — the biggest jump since the group began tracking prices in the early 1970s.

“House prices are exploding right now. Everything in the housing sector is going up in price,” Jason Furman, a former top economic adviser in the Obama administration, told CNN’s Poppy Harlow. “It probably isn’t the case that the Fed should be continuing to artificially hold mortgage rates down.”

Danielle DiMartino Booth, a former Fed official, agreed that the most obvious starting point for the Fed to begin to remove stimulus is on the mortgage front.

“Ultra-low mortgage rates have helped feed a frenzy in housing,” said Booth, who is now CEO and chief strategist at Quill Intelligence.

Given the number of Americans currently on unemployment and the uncertainty about Covid-19 variants, the Fed is understandably cautious about removing support too early. That’s what the European Central Bank did in 2011, a move that in hindsight helped drive Europe’s economy into a double-dip recession.

Nor does the Fed want to spook investors who have become accustomed to free money from central banks. A steep market drop could undermine confidence in the economy.

Still, the central bank’s support for an already-booming housing market risks locking first-time home buyers out of the market. That would be a very negative outcome given that owning a home is the way many Americans build wealth. How many Millennials are likely to have enough money saved to make all-cash offers?

The Fed’s support is “making inequality worse,” said David Kelly, chief global strategist at JPMorgan Funds. “You end up subsidizing the rich at the expense of the poor.”

Inequality is particularly glaring in the housing market, especially along racial lines. The rate for Black homeownership in 2017 was just 42% in the United States, compared with 72% for White Americans, according to the Urban Institute. That 30-percentage-point gap is larger than it was in 1960, when housing discrimination was legal and the gap between those same demographics was 27 points.

To be sure, central bankers don’t have the power to narrowly tailor their policies the way that lawmakers and presidents can. (For good reason, since they’re not elected). Monetary policy is a blunt tool.

“Just because you only have one sledgehammer, doesn’t mean you have to use it everyday,” said Kelly.

Kelly’s boss, JPMorgan CEO Jamie Dimon, recently told lawmakers there is a “little bit of a bubble in housing prices.” But he added, the situation isn’t as severe as in 2008 when there was a lot more leverage and poor underwriting standards.
Home prices now are so high that some prospective buyers are just walking away. Existing home sales dipped almost 3% in April, the third consecutive month of decline. Given the intense demand for housing, this shows there aren’t enough homes on the market, at least not affordable ones.

“Double-digit price increases is running too hot, to the point that it’s slowing things down,” said Boockvar, the Bleakley CIO.

In other words, the Fed’s support for housing may be helping to depress activity — exactly the opposite of its stated purpose.