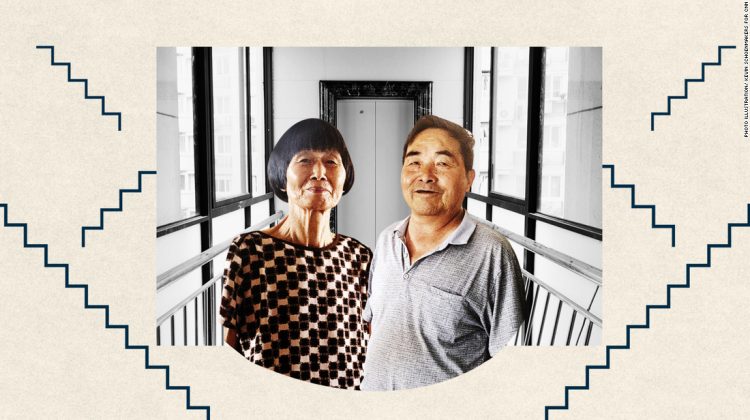 The couple’s neighborhood, Bigui Garden, in a suburb of the eastern Chinese city Hangzhou, is made up of rows of blocks, each fitted with an internal staircase and 12 apartments on the second to seventh floors.

China has an enormous stock of stairs-only neighborhoods. Most were built before the turn of the millennium by the government, which preferred to construct towers not above six stories — anything taller legally needs a lift.

In 2019, the vice minister of China’s housing ministry said more than 100 million people lived in residential compounds with buildings older than about 20 years that were found lacking necessary facilities, such as elevators.

Many of the people who moved into such apartments decades ago have since become retirees with creaky knees, and the country’s demographic trends point toward their ranks only growing in number. The latest census showed the proportion of citizens aged over 65 jumping from 9% in 2010 to 13.5% in 2020.

And they all need somewhere suitable to live.

The government of Guangdong, the southern province bordering Hong Kong, introduced a policy for retrofitting elevators into tower blocks in 2008. Other provinces and cities followed suit, and in 2015 the central government announced its own policy.

Often, such schemes work like this: local governments offer tens of thousands of dollars in subsidies to residents willing to collectively pay a portion of the cost for an elevator to be retrofitted onto their stairwell.

But despite there being no shortage of sixth-floor seniors, the government’s generosity hasn’t quite sparked the elevator building spree that was predicted, says Xu Leiqing, a professor at Shanghai’s Tongji University, who specializes in architecture and urban design. “In the past years there haven’t been nearly as many successful retrofits as we had thought.”

Getting an elevator installed can be an onerous undertaking that involves significant quantities of money and red tape.

Sometimes there is simply no suitable space for an elevator shaft. Often, old wiring and pipework would need to be reconfigured.

But the biggest obstacle, Xu says, are uncooperative neighbors. Just one resident expressing strong opposition can mean an elevator never gets off the ground.

In 2019, after nearly two decades, and who knows how many trips up and down their stairwell, Wang and his wife were enthusiastic when the local government announced it would help pay for elevator retrofits. However, some of their neighbors didn’t think spending thousands of dollars on an elevator was worth it.

“People on the higher floors wanted to install one, but the people on the lower floors not so much,” says Wang. In the end, only few Bigui Garden residents managed to come to an agreement.

At an impasse, the local government decided to go another route, one that would make otherwise unassuming Bigui Garden the subject of country-wide curiosity.

Rather than depending on all the families of every stairwell to split the bill for an elevator, it had a local company, Onton, install it without charging any upfront fees. Instead, residents pay per ride. In the past few months, most remaining apartment blocks in Bigui Garden, some 114 in total, have been fitted with what have been dubbed “public transport elevators.”

The concept has grabbed headlines in China for its ingenuity but also for its price. At 1 yuan ($0.15) per ride, leaving home several times a day can add up to a significant chunk of the average retiree’s income. “It’s a little expensive,” Wang says. He still takes the stairs when going down.

Residents top up their credit using an app and one of China’s mobile payment platforms. In the three months since their elevator went into use, Wang has spent over 300 yuan ($48), he shows on his phone after some fumbling around for the right menu option.

The arrangement is set for 20 years. Then residents will decide whether to keep paying each time they use the elevator, or choose free rides while paying maintenance and running costs.

So far, the results have been disappointing, Onton representative Jiang Fei told Shanghai-based news site The Paper. “The data doesn’t look good,” he said. “Fewer people are taking the elevators than we expected.”

In another interview, with state-owned magazine China Newsweek, Jiang said it is unclear if the scheme will deliver profits. “There’s some pressure regarding when and whether we’ll recoup our investment,” he said. “After all, it’s a new business model.”

Both the local government that administers Bigui Garden and Onton declined to be interviewed by CNN, saying there had been too much media coverage of the project already. The “public transport elevators” in May even made it onto CCTV, the national state broadcaster, which ended its segment by warning the approach would not be a solution for all older neighborhoods around the country, without specifying why.

Other reports have pointed out taking the elevators in Bigui Garden can be challenging for elderly users because it means wrestling with smartphones and online payments.

The elevators are fitted with facial recognition cameras to process payments. “Scanning your face is really, really slow,” Wang says, miming the back-and-forth, left-to-right motions he makes to get the camera to identify him. Don’t even try with a facemask on, he adds.

Despite the daily fees and such minor annoyances, Wang and his wife are enjoying their new elevator. “I use it every day!” he says.

Yu, who only gave her family name, lives in one of the few apartment blocks in Bigui Garden whose façade hasn’t been broken open for an elevator. A second-floor neighbor objected to the plans, arguing the flat 1 yuan fee, regardless of which floor you’re going to, is unfair — and that the elevator shaft would ruin their view, Yu says.

“It’s a really good policy,” she says. “But just because one family disagreed, 11 families have been deprived of their rights. It’s so unfair.” The one dissenting vote means Yu, 54, is still scaling five flights to get to her front door, and it’s tiring, especially while carrying groceries.

She has already sold her apartment, probably for a lower price than she could have done if it had an elevator. Yu says she’ll miss the neighborhood’s quiet and convenience, but right now she has no choice. “When I’m old I really won’t be able to make the climb,” Yu says.

Opposite Wang’s apartment block stands a more harmonious stairwell, where each ride is free.

Shen Shuiying and her neighbors were among the few who agreed to fund their own elevator. The families on the top floor paid close to 60,000 yuan (9,281); Shen and her husband Jiang Zhonggen, on the fourth floor, paid over 20,000 yuan ($3,114); and the bottom-floor residents didn’t pay anything, she says.

With long black hair, a colorful dress, and a lollipop in the corner of her mouth, Shen doesn’t look 74 years old. But she says she has a bad knee and is glad she doesn’t have to pay anything extra to take the elevator instead of the stairs whenever she comes or goes. So far, in 10 months, Shen and Jiang have made one contribution of 500 yuan ($78) for upkeep and electricity.

The couple says the negotiations over who would pay how much went smoothly. Even though most of her neighbors aren’t yet of retirement age, Shen isn’t surprised they, too, saw the need for an elevator.

After all, she says: “Everyone gets old.”