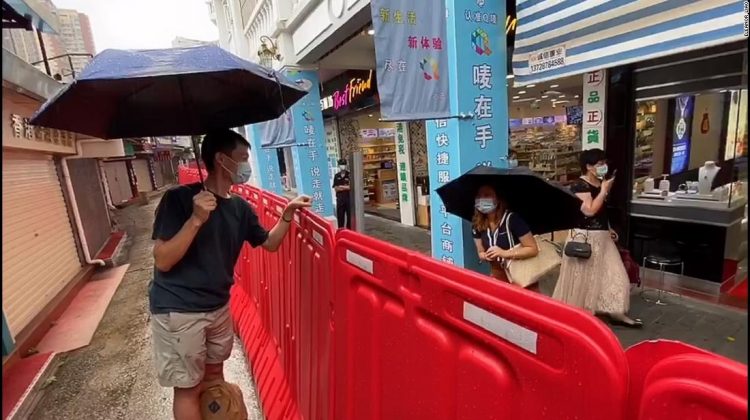 Hong Kong (CNN) — For three years, Eleanor Liao and her boyfriend Aaron Leung lived about 12 miles away from each other. But the onset of the coronavirus pandemic made them feel like they were in a long-distance relationship.

Liao lived in Shenzhen, a metropolis at the southern tip of Chinese mainland, while Leung was based in neighboring Hong Kong, which, as a “special administrative region” (SAR), has different rules than mainland China.

While some of these only relate to politics and local government, many regular people — like Liao and Leung — have felt their effects starkly.

As Covid-19 cases rose, the border crossing between Hong Kong and Shenzhen effectively closed in March 2020.

Prior to the pandemic, crossing the Hong Kong-Shenzhen border required travel documents, but it was relatively easy to go back and forth. Approximately 42,000 regular business commuters regularly went between the two cities by train, bus or car every day.

Cross-border relationships were also common: According to the latest figures from law firm Deacons, of the roughly 50,000 marriages registered in Hong Kong each year, about one-third are Hong Kong-mainland pairings.

Liao and Leung met and began dating in April 2018. Before the pandemic, they were like any other couple: juggling their busy schedules, taking turns seeing each other.

He would cross the border to hang out with her in Shenzhen or she would come down to his family-owned music studio in Hong Kong’s Mong Kok neighborhood.

They used to see each other once a week and were never apart for more than a month, she said.

The border closure essentially forced them into a long-distance relationship, connecting online and over the phone instead of in person.

“I burst into tears when talking on the phone with him. It was very hard for me,” said Liao.

Leung recalled the days when Shenzhen seemed only a stone’s throw away. Living in Sheung Shui — in Hong Kong’s far northern New Territories, close to a major border checkpoint — he found it easier to cross into Shenzhen than to commute to Hong Kong Island.

But the pandemic turned an easily crossable border into an impenetrable barrier for this couple.

Technically, the border isn’t fully closed — three of the 15 border checkpoints remain open, but with tight quarantine requirements on both sides. So, although it’s physically possible for them to cross, doing so comes with weeks of quarantine time in a hotel and costs thousands of dollars.

“The pandemic forces you to choose between love and work.” said Liao, an international commodity trader.

The couple goes for a walk in Hong Kong’s Mong Kok neighborhood.

Meeting at the border

By July of that year, mainland China and Hong Kong had been relatively successful in containing the virus, but the border restrictions remained unchanged due to the government’s fear over “imported cases” from outside.

As Liao grew more and more frustrated with the border seal, she imagined going on a skyscraper near a border checkpoint and locating her boyfriend’s home with a telescope.

“There’s gotta be a way,” Liao thought. “We were just a river apart.”

That river is the Shum Chum River (or Shenzhen River, as it’s called in mainland China). It has served as a natural partition between Hong Kong and mainland China since 1898 when the Qing Dynasty signed a lease with the United Kingdom and allowed the British to expand its colony of Hong Kong.

Just before World War II, a small section of the river had run dry and was turned into a street market for residents of both sides. The street — later named “Chung Ying Gaai” or “China-England Street” — caught Liao’s eye.

Half in Shenzhen and half in Hong Kong, the street has always been a place of special interest. It was once a shopping paradise for mainlanders to buy Hong Kong’s duty-free products. The street has since become a historical site and is open to tourists in Shenzhen who have a day pass. That meant that it could be the only way they could see each other in person.

However, Leung had a harder time visiting the street, as it sits in Hong Kong’s restricted border area. He had to be “vouched for” by a local resident inside the zone and apply for a permit at the local police station. Luckily, he knew someone in the town who was willing to help.

Leung arrived in the street earlier than Liao. Since the pandemic, a line of red, plastic water-filled barriers had been set up in the middle of the street — a physical boundary that didn’t exist before.

In the past, visitors could tell which side they were on by checking the store’s signs — the Hong Kong shops use traditional Chinese characters, while the Shenzhen signs use the simplified version.

He walked along the red barriers and stopped at a McDonald’s — the most recognizable landmark in the street — and waited.

Leung and Liao stand on opposite sides of the Ching Ying Street border, unable to touch each other.

On the other side, Liao got off the bus. After going through the winding customs pathway, she called Leung’s phone number and looked for him.

The reception on her phone was spotty. They shouted for each other and kept asking “Where are you?” After some frantic searching, Liao finally spotted her boyfriend. With his shoulder over a barrier, Leung stood on a stool and held an umbrella with one hand as his fidgety pianist fingers tapped on the barrier.

Tears, blended with raindrops, rolled down Liao’s face. Leung took out his phone to film his girlfriend, but then he started to cry too.

Over the barriers, they talked and talked, not keeping track of the time. They wanted to hug each other, but knowing the potential risks of making physical contact at the border, they restrained themselves.

After three hours, a police officer came over and asked them to leave.

“I was very touched,” Liao recalled of their cross-boundary near-reunion. But she said seeing him again also made her sadder.

“I was standing in front of him, but why couldn’t we hold each other’s hands?”

Love in the time of a pandemic

Fast forward to March 2021. Liao has posted a video on social media announcing that she had quit her job. But that wasn’t the biggest news: after securing a new job that allows her to work from home, she would be heading to Hong Kong to get married.

The couple made an appointment to wed on May 28 at Hong Kong’s Red Cotton Drive marriage registry office.

The ceremony took place in a hall with golden floral wallpaper, elaborate white columns and plaster cornices. There was a marble table in the front, and rows of seats in the back. Mendelssohn’s Wedding March hovered in the air, played on repeat.

Before the wedding could begin, the official conducting the ceremony asked some guests to wait outside in the hallway, as the Hong Kong government still only allows 20 guests for weddings due to Covid-19 restrictions. Everyone was dressed in their best clothes, accessorized with the face masks that are still required by law.

Leung and Liao sat on one long side of the table, Leung’s mother and brother across from them.

Led by the registrar, Leung and Liao exchanged their vows in their native Cantonese.

After signing the certificate, they officially became husband and wife.

Leung and Liao pose on their big day with Leung’s brother (left) and mother (right).

“It was a simple ceremony. When the registrar declared our marriage, it made the whole thing very solemn,” Leung said.

“I could see you wanted to cry,” Liao said to her new husband.

But despite the joyous occasion, there were still some notes of sadness.

Although Liao was happy about her big day, she was sad that her family and friends in Shenzhen had not been able to join her to celebrate in person.

And unlike in storybooks, the wedding didn’t bring a magical happy ending — yet.

Shortly after the wedding, Liao returned to Shenzhen alone to re-apply for a long-term visa with her marriage certificate. The temporary visa she was on was a quick fix just for the wedding. Crossing the border also required another round of quarantine — 14 days in a hotel and seven days at her home.

It’ll still be a long while before these two can live together as husband and wife.

These days, many countries in the west are flinging open their borders and using phrases like “post-pandemic” and “back to normal.” Yet Asia has generally been more conservative in its approach to reopening.

No matter what a government chooses to do, it’s often regular people like Leung and Liao who feel the brunt of the decision the most.

“I hope the restrictions can be relaxed. I know there are so many families separated,” Leung said.

The bride may have bought her dress online at the last minute and had to quarantine in order to say “I do.”

But Leung and Liao’s wedding shows that despite disease, government regulations and hardship, love still manages to find a way.