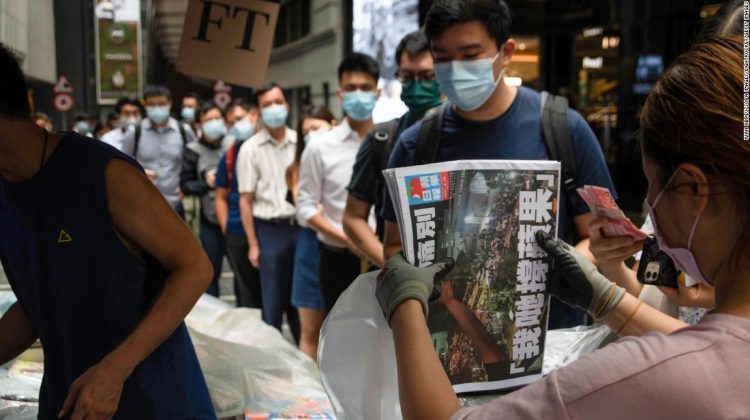 For a large, supposedly all-powerful authoritarian state, a tabloid newspaper with a daily circulation of just 100,000 copies most likely wouldn’t pose any serious challenge to its rule.

But for China’s ruling Communist Party, even that is seen as too much of a threat.

In a way, Beijing’s heavy-handed approach to bring Hong Kong to heel reflects a new level of self-confidence and assertiveness the Party has acquired under President Xi Jinping — no longer worried about repercussions from the West, it tightens control where it sees fit with a scornful disregard for the condemnation or sanctions that may follow.

But its obsession with control also betrays a deep-rooted insecurity.

The supposedly omnipresent and omnipotent Communist Party is well aware of the power of the media and public opinion. Chinese state media has called Apple Daily “poisonous” and a “dangerous political organization,” and tried to portray its closure as an event of “great satisfaction to the hearts of Hong Kong citizens.”

But the fact that 1 million copies of Apple Daily’s final edition were snapped up across the city on Thursday shows the level of support it commanded among Hongkongers — and the scale of resentment towards Beijing.

Since its revolutionary days, the party has viewed military and propaganda — or “the barrel of the gun and the shaft of the pen” as described by former Chairman Mao Zedong — as the two most important tools for its ascent to and hold on power.

For the party, the central mission of the media is not to hold the powerful accountable, but ensure those in power hold on to it. Newspapers, literature, television, film, music, theater and even pop culture is a conduit through which the party can propagandize its ideas and policies, and shape public opinion in the direction it desires.

As China grew richer and became more globalized, constraints on pop culture were relaxed, with music and TV shows in particular becoming more market orientated. Domestic media outlets meanwhile were given some room to conduct hard-hitting journalism, and at times expose the corruption of local authorities, but the party’s fundamental view on mass media remained unchanged.

And since Xi came to power, he has doubled down on the maxim that the media should serve the party, squeezing the already limited space for critical reporting. And the tightening of control has extended well beyond the press, into a broader crackdown on ideology, from university classrooms and bookstores to the entertainment industry.

As Beijing tightens its grip on Hong Kong, it is natural for the party to turn to the city’s sharpest pen — one that has long been a thorn in its side and serves as one of the last remaining rallying points for calls for democracy and resistance to Beijing.

The demise of Apple Daily came just ahead of the party’s centenary on July 1, a day that is also commemorated in Hong Kong for its return to Chinese rule — and had traditionally been marked by massive pro-democracy protests.

While authorities were able to quickly clamp down on smaller protests on July 1 last year, they couldn’t stop Apple Daily from splashing a defiant rebuke of the newly-effective national security law on its front page — which stood out from the identical government sponsored front pages that celebrated its enactment in other newspapers.

This July 1, as the party celebrates its 100th birthday, it wants to show a message of absolute triumph, unity and strength.

With Hong Kong’s annual protest called off, the opposition camp in jail and the largest pro-democracy newspaper shuttered, it won’t need to worry about any public expression of dissent — either in the streets or on newspaper front pages.

But suppressed dissent will not simply evaporate — meaning, the insecurity of the party is here to stay.

It’s Party time: A bridge on China’s Yangtze River is lit up during a light show in the city of Wuhan to celebrate the party’s approaching centenary. Wuhan, a city that was devastated by Covid-19 in early 2020 due to the government’s initial mismanagement of the outbreak, is now proudly touted by Beijing as an example of its successful strategy in taming the virus.

Washington is taking aim at yet another major Chinese industry over forced labor allegations in Xinjiang.

The Biden administration on Thursday announced that it would block certain materials used to make solar panels from a company called Hoshine Silicon Industry, which is based in the region. The White House accused Beijing of “engaging in cruel and inhumane forced labor practices” in Xinjiang, leading to the ban.

For years, the US government has claimed that up to two million Uyghurs and other Muslim minority groups there have been imprisoned in re-education camps. Many industries, from tech and agriculture to the hair trade, have faced claims that their supply chains are compromised by the use of forced labor by minorities there. (China has repeatedly denied all allegations of abuse.)
But the move against solar panel components marks a big escalation of prior efforts to pressure China.

The country has an outsized role in the global solar power industry, producing much of the world’s capacity for various components needed to create the panels. Xinjiang alone produces nearly half of the world’s solar-grade polysilicon, and is home to factories for some of the industry’s biggest players — including Hoshine.

Solar power, meanwhile, is central to US President Joe Biden’s plans to move the country to greener energy. Solar and wind are considered critical to climate plans for dramatically cutting carbon emissions over the next several years.

Cutting Xinjiang out of the process likely makes achieving those goals a lot tougher. Analysts have suggested that Biden could account for more responsible growth in the industry by investing in US solar panel components manufacturing.

It’s not clear how successful Biden will be at doing so, though. Reports suggest that a forthcoming deal in Washington on infrastructure omits comprehensive plans for fighting climate change.