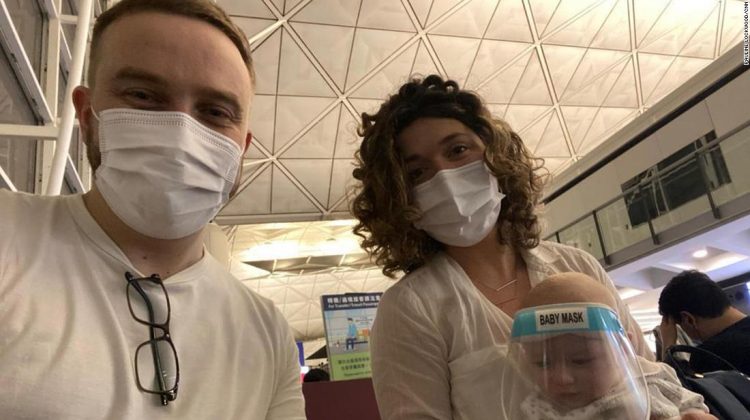 Hong Kong (CNN) — As someone who has tested positive for Covid-19 in both Britain and Hong Kong, I’ve experienced the worst of both worlds.

In one, I fell victim to the complete failure to check the disease’s spread, and in the other I got caught up in a zealous system intended to completely eradicate Covid-19.

The pandemic’s true tragedy is that the virus has killed nearly four million people worldwide, but it has also come with widespread repercussions. After undergoing four quarantines, the one when I actually had Covid-19 was the least traumatic. For me, pandemic measures have been far harder to deal with than the disease itself.

I’m a Franco-British national with a British husband. We live in Hong Kong, where they have some of the harshest anti-Covid-19 measures in the world.

Non-residents are not allowed in, incoming travelers now need to quarantine in a hotel at their own expense, and, if you have been in contact with a positive case, you can be whisked away to a government quarantine camp for at least 14 days. Some parents have been separated from their children if one family member tests positive.

I tested positive for the first time in the summer of 2020, when we took our four-month-old daughter to see family in the UK. At the time, Asia was still on Covid alert, but our friends in the UK said the worst had passed. Yes, we would have a 14-day home quarantine when we returned to Hong Kong, but to us it was worth the sacrifice in order for our families to meet our baby. And we promised we would be careful.

Looking back, I realize how naïve we were. In Hong Kong, people are publicly shamed for not wearing masks, temperatures are taken before entering any public premises, and cleaners disinfect elevators and escalator handrails every hour.

In the UK, few people wore masks, including waiters in pubs and restaurants. It seemed mad to me that strangers breathing down on our food was not seen as a problem during a pandemic.

Less than a week after we arrived in the UK, my dad tested positive for Covid. Then my mum did. Then I did. My husband and baby somehow tested negative, but a few days later had symptoms.

The only real difficulty I had breathing was from the panic attack I had the morning following our test results.

As we tested positive soon after noticing symptoms, there was still the real possibility that one of us would get seriously ill. The first few nights I barely slept; I kept checking that my baby was still breathing before sneaking down to the floor below to check that my parents were still breathing too.

The worst of my symptoms came four days after testing positive, but they were nothing more than a bad cold and a cough. As the days went by, we all relaxed and decided to enjoy the garden as we waited the end of our quarantine. We knew we had got off lightly, unlike many others. Looking back, it was an idyllic quarantine.

Back in Hong Kong, it was very different.

At first, I was relieved to be returning to a city where everyone took the virus seriously. We’d delayed our return by a few weeks to make sure we were fully recovered.

My husband and I decided he would travel ahead to see if he tested positive on arrival. He didn’t, which gave us confidence that I wouldn’t either, so I followed with our daughter shortly afterwards. At the time, incoming travelers did not need to provide proof of a negative test before flying.

But the morning after landing in Hong Kong, I received a call from an “unknown number.” Before I answered, I instinctively knew it was bad news.

A lady asked for my name, where I had been sitting on the plane and who I had talked to.

My heart sank: I realized she was contact tracing — and that I had tested positive.

The ambulance was on its way; I would be taken to the hospital.

I called my husband in tears, packed my bags and my baby and waited. I had no idea which hospital I would be taken to, or if my baby could stay with me. She could; doctors realized I had an old infection, so they said it was safe.

In the Infectious Disease Ward, we had daily Covid tests and check-ins with the doctor. I would only be discharged if I had two negative tests in a row.

I started to despair. I had been positive for six weeks; was I going to be locked in this room for another six? Visitors were not allowed, and medical staff only entered my room in full hazmat suits. Anxiety, boredom, and loneliness seeped through me. I felt like a prisoner.

One of the doctors, noticing my growing agitation, agreed to refer me to the hospital’s psychologist, whom I have seen at least once a month since. As I was in a hospital, that was quite easily arranged, and the psychologist video-called me the following day. But such services are simply not available in the city’s other quarantine centers, they said.

It took 10 days to get the elusive consecutive double negatives to “qualify” for discharge. But my elation was quashed when the on-duty nurse bluntly told me social services was coming to come pick up my 5-month-old daughter to take her to government quarantine, alone, for 14 days. “Because she is close contact,” I was told.

In hospital in Hong Kong.

My reaction was hysterical. Thankfully my doctors were just as outraged as I was, and convinced Hong Kong health authorities to let my daughter quarantine with me at home.

This was an absolute victory, though my husband, who had just finished a 14-day quarantine period at home the night before, had to quarantine with us again for another two weeks.

It took me a few weeks to fully mentally recover. The stress from all the uncertainties of that hospital stay kept me in a state of constant high alert. I kept waking up in the middle of the night from nightmares where I was trapped.

After a spate of traumatic cases involving parents separated from their children, the government said in March: “For cases where children are involved, each and every decision has been made in the interests of the children and their families.”

As Hong Kong began easing Covid restrictions in early March, I returned to a normal routine.

A week later, that “unknown number” came up on my screen again.

This time, I was a close contact of a positive case at my gym and had to isolate at a government quarantine camp for 14 days.

The view from our room in government quarantine.

My initial reaction was panic. Memories of my hospital stay bubbled to the fore, but at least this time my husband and baby were coming with me. We all tested negative the next day.

Rooms in the Penny Bay quarantine camp are a little over a 150 square feet (14 square meters). The staff had fitted in an extra cot next to two single beds, which did not leave a lot of extra room for our child, who was then 10 months old.

We were not allowed to leave the room, open windows or doors; food and essentials were delivered through the window in small plastic bags by staff in full hazmat suits.

Meals were chosen from a fairly extensive menu, but the food was far from appetizing. A few weeks after our stay, there was a food poisoning outbreak and the catering company was changed.

It was possible to get items delivered, though the practice was discouraged; a full list and pictures of the items had to be submitted via Whatsapp for approval before they could be dropped off.

We were never told why such stringent measures had been implemented.

Getting Covid-19 carries stigma in Hong Kong. I don’t dare tell people that I have had it, because I worry that I will be judged. My physiotherapist said I had been silly and selfish to have gone back to the UK. I’m still struggling to understand why people who get sick are made to feel so guilty.

The systems in Hong Kong have worked for the city up to a point. Covid simply does not feel like a concern here anymore. There has been one locally transmitted case in the last 14 days, and only a handful in over a month. With their aggressively efficient contact tracing, the few have been sacrificed for the safety of many.

In March, the government announced all over-30s were now eligible for vaccines, and a few weeks later all over-18s were too. When I heard of the expansive rollout, I was so hopeful and relieved, it held the promise of life returning to normal. But that was not to be. Getting vaccinated here makes little tangible difference and restrictions are not being eased.

Frustrations remain high among the expat community in Hong Kong, a key group in the city’s financial sector. The only way we can resume a normal life is through herd immunity. Hong Kongers are largely not interested in getting vaccinated, despite a highly efficient booking system rolled out since February.

In a city of seven million people, 19.7 percent have had two doses of either the Sinovac or BioNTech vaccine.

Some small concessions have been made, vaccinated travelers have had their hotel quarantine reduced from 21 to 14 or 7 days if traveling back from small pool of countries considered less risky.

On Monday, June 21 the Hong Kong government announced that vaccinated travelers who test positive for antibodies will soon only be required to do a 7-day hotel quarantine. But the UK has just been added back to the high-risk list, requiring a 21-day hotel quarantine regardless of vaccination status.

And for the first time in over a year, non-residents may be allowed into the city in the next few weeks.

Now, three months on from my last Covid quarantine, I am considering another three weeks of hotel confinement in the autumn, hoping it will truly be my last. This is a choice that I will be making knowing full well Hong Kong’s requirements for re-entry. My family in England is not only desperate to create a bond with my daughter, but they have been going through life events that need my support and attention.

I do have lingering worries about how being locked up in a room for three weeks will affect my daughter. Will the benefits of visiting her family outweigh the drawbacks? I honestly don’t know. Some friends think I am crazy, many are supportive.

The city’s draconian Covid travel restrictions, coupled with a deteriorating political situation, means that expat friends and colleagues are leaving in droves. I hear of new departures every day.

I completely understand the impulse. But, because we love Hong Kong, I am hoping that my husband, daughter and I can stick it out until the world sees the back of Covid-19.

The city, of course, needs to act in its citizens’ best interest, and has undoubtedly saved many from deaths with its ruthless “zero Covid” policy, unlike my home nations.

When we moved to Hong Kong, we knew the city was on the other side of the world, but with modern travel it never felt that far way. It was always possible to be home within a day.

But that’s no longer the case; the pandemic has made the world feel as big as it is actually is.

Pauline Lockwood is a Senior News Editor for CNN, based at the network’s Asia-​Pacific headquarters in Hong Kong.