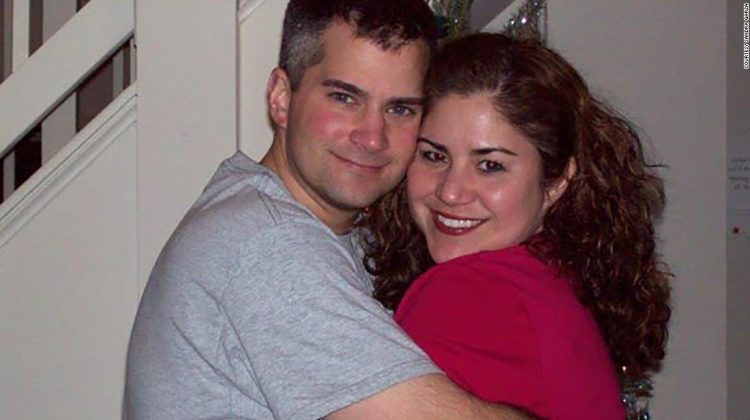 When we finally were ready to meet for our first date, he made an odd request. Meet for breakfast? I came to learn that breakfast was his favorite meal of the day, particularly blueberry pancakes. Brian was very quiet, shy almost, and had an innocence about him that was incredibly endearing. We bonded over our love of animals, our military experience, and our passion for helping others — he as an officer, me as a clinical social worker.

Soon, we moved in together — for 11 years, through the good, the bad and the ugly, the belly laughs, birthdays, Thanksgivings, Christmases, road trips, vacations, heartbreaking losses and moves to new homes. Last July we took a break from our relationship to figure out our futures. He kept our dachshunds; I babysat them when he worked late. We remained incredibly close.

On the morning of January 6, 2021, Brian reminded me that I needed to stay overnight to be with the dachshunds because there were pro-Trump protests happening over the outcome of the election. He said he would not be coming home until late the following day.

I was busy at work, so I didn’t follow the news that day. Then Brian’s mother, Gladys, called me — frantic — asking me to get in touch with him. “There is something going on at the Capitol,” she said. I assumed it was nothing serious; over our 11 years, it was not uncommon for something to be going on at his job — and Brian was always OK. I reached out and asked him to contact his mother. He did and I went back to my work.

Later that evening, the call came: the worst phone call of my life. It was from a US Capitol Police Officer who told me that Brian was in the hospital. I couldn’t comprehend what I was hearing. He said he would send an officer to my house. As I waited on pins and needles, I was finally met by a Virginia state trooper who could give me no information about what had happened to Brian. She escorted me to the hospital.

When I arrived at the ER, there was no one there to greet me. I told a woman behind a desk why I was there. She asked me to sign in and sit down. I explained the severity of the situation, trying my best to remain calm. Thankfully, the kindness of the state trooper helped ground me in a very agonizing, frustrating moment.

Eventually, I was greeted by the ER physician who told me the terrible news that Brian was on a ventilator and I could not see him because of Covid restrictions. I notified Brian’s mother, who immediately drove with her sister to the hospital. They also were not allowed to see Brian. The rest of his family soon arrived. Brian died the next day.

In the days after his death, I was further shocked and saddened to learn Capitol Police Officer Howard Leibengood and DC Police Officer Jeffrey Smith had died by suicide.

Devastated over the loss of Brian and drowning in grief, I took two months off from work. There were times I didn’t want to get up in the morning, didn’t want to face my life without Brian in it. I also did not watch any of the January 6 footage because I had heard so many terrible things about it and didn’t think I could psychologically handle it.

But before his memorial a month later, something came over me: I wanted to see everything I could and understand what happened that day. As I watched the videos, I couldn’t believe my eyes. I saw officers being brutalized and beaten, and protesters defying orders to stay back from entering the Capitol. All the while, I kept thinking, “Where is the President? Why is it taking so long for the National Guard to arrive? Where is the cavalry!?”

As the months passed, my deep sadness turned to outright rage as I watched Republican members of Congress lie on TV and in remarks to reporters and constituents about what happened that day. Over and over they denied the monstrous acts committed by violent protesters.

I was further angered when Officer Billy Evans was killed in early April at the Capitol, rammed by a driver at the North barricade of the Capitol Complex. The assailant, who was killed by police, reportedly struggled with mental health issues and was not apparently part of the January 6 riot, though he held strong political ideologies, his family said. But it felt very much to me that the attack and Officer Evans’ death was directly related to the events of January 6, that people were newly emboldened to vent their life frustrations with the government by attacking innocent officers who diligently protect the Capitol daily. Still, I kept largely silent out of respect for Officer Evans’ family.

When I learned of the proposal to create a January 6 commission to investigate the attack, and understood the importance of what this bill would accomplish, I finally felt compelled to speak out, along with Gladys, to encourage the Republican Senators to vote yes.

I knew it would not be comfortable or easy being in the public eye, but my desire for justice outweighed any discomfort I felt. As we went door to door to their offices several weeks ago ahead of the vote, some Republican senators were very pleasant and polite. Others were dismissive, and others could barely hide their disdain.

Since those meetings, only a handful of Republican senators showed that they possessed the moral compass to do the right thing by voting yes, putting America first, and showing warmth and compassion for the officers (as well as their families) who protect them daily.

By denying or downplaying the viciousness and trauma that occurred on January 6, members of Congress and the people who continue echoing their false narrative are engaging in a specific kind of psychological harm that is familiar to people who work in mental health. It’s known as “secondary wounding.” Secondary wounding, described by psychologist Aphrodite Matsakis, occurs when people “minimize or discount the magnitude of the event, its meaning to the victim, [or] its impact on the victim’s life.”

Make no mistake: All of the officers and people who were physically harmed, terrified, psychologically destabilized or lost loved ones due to that day are literally being re-traumatized every time someone speaks untrue words to describe what happened on January 6.

For those lawmakers who voted no, I will continue to speak out to remind them and those Americans who support them, of the horrors of that day and the trauma that continues in the minds of those that suffered in the battle in the very seat of American democracy. This not only includes the officers, but fellow senators and congressmen and women, as well as the innocent employees who were in the Capitol that day who were terrified and wondered if they, too, would make it home that day.

Brian was a proud American and loved his country. He continued his service long after his time in the military by becoming a US Capitol Police Officer, serving the American people and members of Congress — and protecting democracy.

To know that some members of Congress — along with the former President, Donald Trump, who Brian and I once supported but who can only now be viewed as the mastermind of that horrible attack — are not acknowledging Brian’s heroism that day is unforgivable and un-American.