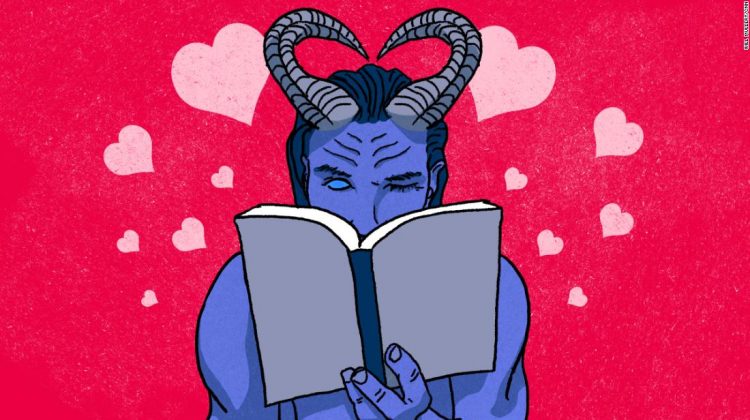 There are some things that cannot be properly explained within the lines of your average news website. “Ice Planet Barbarians” is one of those things.

The science fiction romance series chronicles a band of human women stranded on — you guessed it — an ice planet, along with the hunky blue aliens who love them, and the many, many unprintable things they do to each other.

And despite the first installment being written more than five years ago, “Ice Planet Barbarians” books have been flooding Amazon’s bestseller lists since May. They’re topping the sci-fi charts and have caused a frenzy on social media. Bookstores have even made special orders to stock some of the 22 main titles in all of their barbaric, bare-chested glory.

Thank BookTok, the network of book lovers on TikTok who can catapult books like “Ice Planet Barbarians” from comfortable, niche obscurity to overnight fame with a single viral video.

If there’s one reader to blame for the current “Ice Planet Barbarians” moment, it’s Emma Carter. The 22-year-old has a familiar story: Furloughed at the beginning of the pandemic, she moved in with her parents in Kansas City, Kansas and dove headfirst into TikTok, posting bookish fandom content like Sarah J. Maas series reviews, spicy book recommendations and thirst traps of the movie dads from “Twilight.”
On May 22, Carter filmed herself casually making an iced coffee and extolling the virtues of a, at the time, relatively obscure series. (Watch it here for posterity, but be warned there is colorful language.)

Whether it was her praise of author Ruby Dixon’s “sweet” and “weirdly complex” storytelling, the promise of “males who are simps” and treat their women right, or the more, uh, anatomical aspects (Ridges! Knobs!), something about “Ice Planet Barbarians” struck a chord.

Over the next few weeks, IPB books started popping up on Amazon’s Sci-Fi and Romance bestseller lists, occasionally even taking the top spots. The first few books in the series have also cracked Amazon’s overall Kindle bestseller list. BookTok readers are having a ball posting memes and reviews, sometimes appearing truly vexed that their casual curiosity about good old-fashioned alien erotica coalesced into actual enjoyment.

Carter, who has been tagged in an exhausting number of these videos, is pretty thrilled.

“I love it. It’s a testament to the internet and this camaraderie of readers on TikTok,” she tells CNN.

“There’s no shame when you read. Some people may look at the shirtless men on the covers and think this is the most outlandish, disgusting thing you can read. But all it took was one person, saying with their whole chest, ‘I like these books.’ And then all of a sudden, other people are reading it. They’re liking it. They’re saying, ‘Oh, this is really good,’ too.”

Note: Carter stresses that the IPB series is most definitely 18+, and some books contain sensitive content.

For a time, author Ruby Dixon was minding her business, blissfully unaware that vast swaths of the internet had succumbed to her “Ice Planet Barbarians” ouvre. Her first clue was a spike in sales on the Amazon Kindle store. She didn’t think too much of it — IPB already had a healthy fan base on Facebook and benefited from the occasional social shoutout. Then, her mom called.

“Did you know you’re trending on TikTok?” she said.

“It’s been both amazing and terrifying,” Dixon tells CNN. Dixon is a private person, and tries to avoid getting too far into the social media fray. But she loves seeing the creativity and enthusiasm of new IPB fans.

“Everyone has been so kind and lovely,” she says. “[TikTok] is a totally different vibe than the traditional reviews that books get. Readers love making fan art. They love discussing books and getting their friends to read things. It’s such a strong, creative community.”

Dixon is staggeringly prolific. She estimates she’s written more than 150 books, including novellas, since 2003, and tries to write between 4,000 and 6,000 words a day.

She started writing “Ice Planet Barbarians” for a simple reason: A series about virile, yet gentlemanly aliens didn’t exist yet. And maybe it should. As a romance and sci-fi lover, Dixon wanted the genres to meet in a very specific way. Less dark and broody, perhaps. More humor and babies. (She has written a whole series of spinoff IPB novellas, with titles like “Ice, Ice Baby” and “The Barbarian Before Christmas.”)

“I like a softer, happier story. I like found family type stories. I like a community with a lot of characters so you can feel you get to ‘know’ everyone,” she says. “Not every book has to be a Pulitzer-winning thinkpiece. I’ve always read escapist, happy fiction, so that’s what I want to write, period.”

For those wondering how on earth Dixon pitched a huge series about baby-crazy barbarians with horns and tails and magical mating parasites, she didn’t have to: The series is self-published.

The power of BookTok

“A Court of Thorns and Roses” is another popular series beloved by BookTok Credit: Bloomsbury Publishing

It isn’t unusual for authors to get huge, unexpected boosts from TikTokers discovering their work. The video sharing app is a powerful platform with intersecting pockets of interest. Fantasy, romance and young adult novels enjoy especially large BookTok followings: The “A Court of Thrones and Roses” and “Throne of Glass” series by Sarah J. Maas, the “Shadow and Bone” series by Leigh Bardugo; emotional romances like “It Ends with Us,” by Colleen Hoover. “The Song of Achilles,” an award-winning romantic retelling of the Iliad written by Madeline Miller and published in 2011, has also enjoyed a recent resurgence thanks to TikTok’s enthusiasm.
The BookTok effect is so potent, stores like Barnes & Noble keep lists of books that have gone viral on the app.
Holly Root of Root Literary, Dixon’s agent, says agencies want to find ways to use the magic of BookTok for advertising, but right now, moments like the “Ice Planet Barbarians” craze are pure, unplanned serendipity.

“Any time people are finding something to read that brings them joy and telling other readers about it, that’s a win, and there’s a lot of that on BookTok,” she says.

Emma Carter in the TikTok that started it all Credit: Courtesy Emma Carter/@charl1eswansong

“Ice Planet Barbarians” is escapist fiction, where concerns about sexual politics, interstellar travel and human anatomy are checked at the spaceship door.

But if you wanted to read deeper into it … well, you could.

Carter and the series’ other champions point out the books cover a lot of material that is decidedly not light reading: A sexual assault survivor heals and prevails. Families contend with loss and generational trauma. People of all shapes, sizes and abilities are shown they are worthy of love and desire. Dixon says she makes sure to include underrepresented themes, like male virginity.

Anyone who bothers to open a romance book of any kind knows the genre is much more than empty-headed sex.

But even if it wasn’t, who cares?

“There are a lot of conversations in the BookTok community about misogyny and snobbery when it comes to books like these,” Carter says. “This is literally a sci-fi book written for the female gaze. So what if it’s not highbrow literature? Women can rage against the patriarchy in their real lives, and then read about a fun fantasy world and be smart and complex enough to know the difference.”

“We’ve got to stop demonizing things that women like,” she says.

For Dixon, it can be hard to garner respect as a sci-fi romance author. One time, she says, a boss asked her if she tried some of the things in “Ice Planet Barbarians” on her husband.

“And I wondered, do people ask crime writers that?”

Luckily, attitudes toward romance and erotica seem to be changing as more groups of smart, well-read people gather in spaces like TikTok. Often, they are young women, nursing the “Twilight” and “Harry Potter” obsessions of their youth or sharing fan fiction recommendations, no matter how obscene or bizarre they may be. Compared to the recesses of Gen Z creative writing engines like Wattpad and AO3 — or certain sections of the Amazon Kindle store, for that matter, — a little human-on-alien loving is nothing to clutch your pearls over.

“There is a shift in the culture from when I was younger, when you may have read things like fan fiction but you didn’t tell your friends about it,” Carter says. “Now as adults, we’re discovering adult fiction. And there is no shame anymore, as there shouldn’t be. You can truly read whatever you want as an adult.”

After all, life is hard. Love is hard. Some days, getting blasted out of the solar system to a planet full of 7-foot-tall aliens with glowing soul tapeworms promising to love you unconditionally just doesn’t sound so bad.