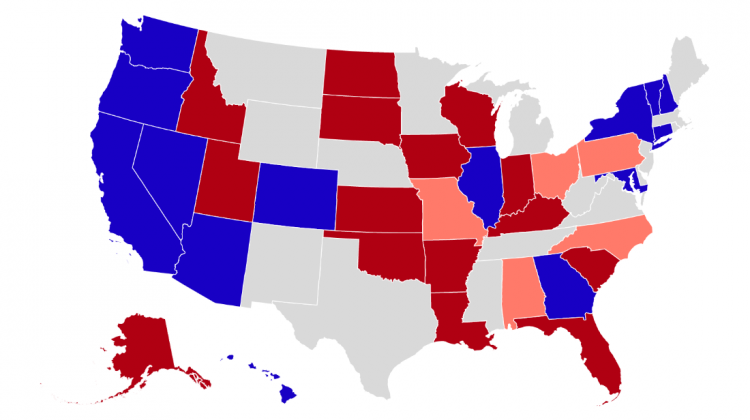 Which makes sense! Ducey is the governor of the state — elected in 2014 and reelected easily in 2018. He’s term-limited out of office in 2022 and quite clearly has future political ambitions.

While Ducey has repeatedly denied interest in running against Kelly including as recently as earlier this week — the word is that he has higher aims, like a presidential run or a VP role — some Republican strategists have held out hope that if the political winds look favorable for Republicans come early 2022, Ducey might reverse course. Why? Senate races — and the Senate itself — are riddled with candidates who initially said “no” (sometimes a bunch of times) before saying “yes.”

Enter Donald Trump. Here’s his statement on Ducey, which was sent far and wide on Wednesday night:

“Good news! RINO Governor Doug Ducey of Arizona has restated the fact that he is not running for the United States Senate. It would not matter, however, because he could not get the nomination after failing to perform on the Voter Fraud in Arizona. Also, there is no way he would get my endorsement, which means, his aspirations would be permanently put to rest anyway. Again, thank you to our brave Republicans in the Arizona State Senate for their bravery in putting forward the Forensic Audit. Everybody is anxiously awaiting the result!”

Trump doesn’t like Ducey because the governor refused to publicly endorse the former President’s wild theories about the credibility of the Arizona presidential results, where Joe Biden narrowly edged the incumbent in the state.

In a tweet thread in December — penned in response to Trump savaging him — Ducey defended his state, writing in part:

“In Arizona, we have some of the strongest election laws in the country, laws that prioritize accountability and clearly lay out procedures for conducting, canvassing, and even contesting the results of an election. We’ve got ID at the polls. We review EVERY signature (every single one) on early ballots — by hand — unlike other states that use computers. Prohibitions on ballot harvesting. Bipartisan poll observers. Clear deadlines, including no ballots allowed after Election Day.”

That Ducey was 100% correct in everything he said about the state’s election didn’t deter Trump — or his most ardent backers. An extended recount of the vote in Maricopa County, which was organized by state Senate Republicans, is ongoing, with the former President doing everything he can to elevate it nationally despite the fact that it is clearly a circus.

And Ducey isn’t the only Senate candidate in Arizona that Trump has bad-mouthed.

In late May, Trump said this of state Attorney General Mark Brnovich:

“He is always on television promoting himself, but never mentions the Crime of the Century, that took place during the 2020 Presidential Election, which was Rigged and Stolen. Arizona was a big part and Brnovich must put himself in gear, or no Arizona Republican will vote for him in the upcoming elections. They will never forget, and neither will the great Patriots of our Nation!”

Undeterred by Trump’s criticism, Brnovich announced his Senate candidacy earlier this month — although, notably, his announcement video didn’t include any mention of the former president.
Arizona Republic columnist Laurie Roberts was blunt about Trump’s negative impact for Republicans on the Senate race in a recent piece. She wrote:

“Ex-President Donald Trump continues his obsession with Arizona’s 2020 election, only now with a twist.”

“He’s also working to make it as difficult as he possibly can for Republicans to recapture the Senate in 2022.

“This, by cancelling Attorney General Mark Brnovich, perhaps the party’s best shot at picking up a seat in Arizona.”

Look, Ducey was always a long shot to run, but Trump’s very public attacks likely ensure he won’t reconsider. Brnovich starts at a disadvantage in a Republican primary because of Trump’s outspoken criticism of him. Which opens up the possibility that a more Trump-y candidate emerges as the GOP nominee — a development that would make it less likely for Republicans to beat Kelly in the fall.

When the Senate majority is as precarious as the one Democrats currently hold, every seat matters. That Trump is already meddling in one of his party’s key takeover chances bodes very poorly for McConnell and Senate Republicans heading into 2022.