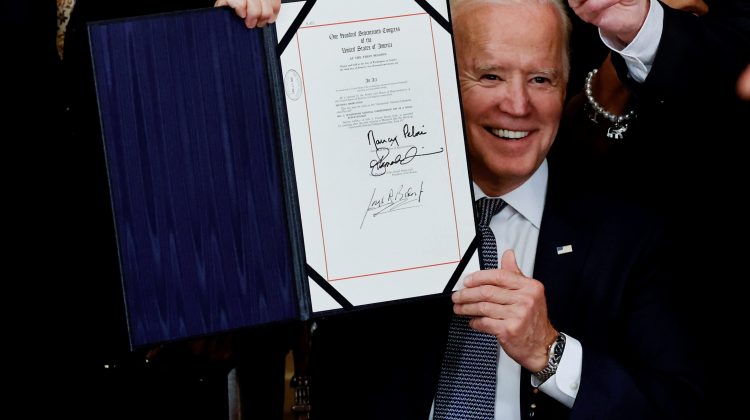 U.S. President Joe Biden is applauded as he holds the Juneteenth National Independence Day Act during a signing ceremony in the East Room of the White House in Washington, June 17, 2021.

Big tech companies will observe Juneteenth by offering education resources during the week of the newly-official U.S. holiday.

President Biden signed a bill to make Juneteenth a federal holiday on Thursday afternoon. The holiday, which lands on June 19th every year, commemorates the ending of slavery in the U.S.

Tech companies’ reactions come after a year of racial reckoning and increased scrutiny of recruiting practices and treatment of Black employees. Some, like Twitter and Square, began recognizing the holiday last year.

“Juneteenth is not just about Black History—it is American history” and a “complex” one, said Dr. Tiffany Bowden, program manager on Amazon’s Global Diversity, Equity, and Inclusion team in a company Juneteenth blog post.

“While rejoicing in progress, we must continue to educate ourselves about our history to help guide our future,” the Amazon blog stated. “We honor those who fought, endured, and continue to persevere in the fight for equality. We celebrate with the awareness that advocacy is still necessary in America’s pursuit of equality and, ultimately, equity.”

To commemorate Juneteenth, Google has “instituted a no meetings day” on Friday June 18 and is “encouraging all Googlers to use this day for celebration, learning and reflection,” according to a spokesperson.

Facebook said its workers can use one of their paid “Personal Choice Days” if they want to celebrate the holiday. Employees can also participate in “a day of discussions” with known activists and public figures, including Dr. Henry Louis Gates and Tina Knowles-Lawson “who will share perspectives on the history and significance of Juneteenth.”

“A lot of meetings have been canceled so folks can go to that,” a Facebook spokesperson added.

Apple said it recognizes Juneteenth as a company holiday in the U.S. and gives employees the day off to observe on Friday, June 18. Apple Retail and AppleCare will remain open to support customers. The company said employees can participate in week-long events that are “designed to educate, build community, and celebrate.”

“Our approach is not to offer a vacation day; but instead use this day to create time and space for employees to better understand critical topics related to race, ethnicity and racial injustice,” said Lindsay-Rae McIntyre, Microsoft’s Chief Diversity Officer. “Recognizing this day with intention allows us to stay connected to the many challenges unresolved, violence unaddressed, and inequities unchanged for the Black and African American community worldwide.”

Microsoft did not specify what learning programs will be offered.

Amazon’s programming includes educational panels regarding the origins and importance of Juneteenth, remarks from Black History experts and a performance and Q&A with African-American Dancers of New York dance studio The Alvin Ailey American Dance Theater.

Facebook said it will feature a video by businesswoman (and mother to Beyoncé) Tina Knowles-Lawson and a “Lift Black Voices Hub” that includes curated mix of fundraisers, educational resources and “content that showcases how communities are reimagining Black freedom on Facebook platforms every day.”

Amazon will sponsor an inaugural celebration called Juneteenth Unityfest. Its bookstore will highlight a selection of books that show the history of Juneteenth in a feature called “Celebrate Juneteenth.” It also said Prime Video has a curated selection of movies and series to acknowledge and honor Juneteenth.