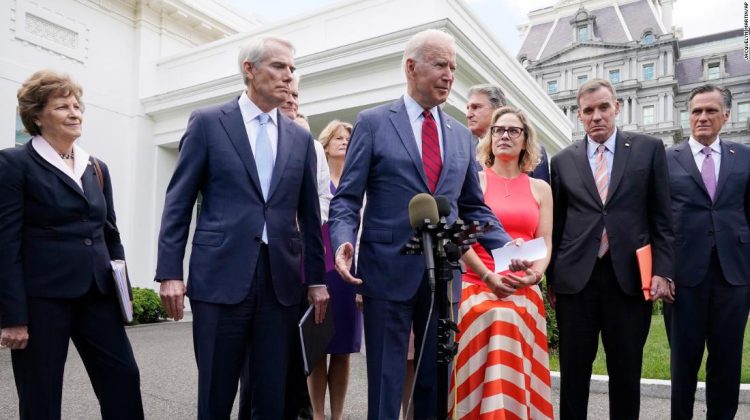 The 48-hour chaos exposed Biden’s continued ability to throw his agenda for a loop with a few misplaced words — and his skill, borne from ample practice, in cleaning them up quickly. The quick work, through calls to GOP senators and the careful drafting of a fresh statement walking back the off-the-cuff remarks at the White House, reinforced a lesson learned over the years cleaning up Biden’s remarks: Speed is essential. Allowing loose comments to fester, former aides say, usually just aggravates the problem.

From the mountain getaway — where he had escaped Washington’s heat and humidity with his family — Biden worked the phones with advisers, many of whom have years of experience gauging and managing problematic things the President blurts out. That group decided this time it would be best to publicly acknowledge the mistake, brace for the inevitable news cycle about his walk-back and move on.

They spent the bulk of Saturday afternoon managing the clean-up effort that stemmed from remarks last Thursday, when Biden decided to take questions after delivering prepared remarks about the infrastructure deal. The President was energized by having achieved one of the chief objectives of his presidency: to foster unity. And he adopted an air of righteousness, claiming he’d proved his naysayers wrong.

Such was his mindset when Biden responded to a question about his legislative strategy by declaring he would not sign the bipartisan deal he had just negotiated unless he had a larger package, which would move with only Democratic votes, on his desk, too. “If they don’t come, I’m not signing,” Biden said. “Real simple.”

His answer bore the hallmarks of a classic Biden slip. He was speaking off-the-cuff, answering questions in an impromptu press conference. He was attempting the plain-spoken manner that is his political brand. And he seemed defensive of his strategy in the face of skeptical lines of questioning.

Even for a President who has previously referred to himself as a “gaffe machine,” it was a blooper whose consequences could have been grave, with his own top advisers privately acknowledging he was too hubristic. Republicans balked at his pledge to reject the deal unless it comes accompanied with a more partisan bill contained the remainder of his family and jobs agenda.

The comment didn’t initially cause alarm bells. Even for the senators who later voiced outrage, it took a few hours for the rogue statement to hit their radar as they were catching flights out of Washington.

When it did, calls and texts began hitting the phones of the senior Biden administration officials who originally helped negotiate the plan.

Privately, some White House officials viewed the anger as bad-faith outrage generated by Republicans seeking to sink the deal. But it quickly became evident that even those senators who helped broker the agreement found Biden’s words problematic.

Biden’s aides were aware that many of the Republicans who helped secure the package, and were later enraged at the President’s comment, were set to appear on Sunday morning news shows. On Friday afternoon, some of the senators joined a conference call to coordinate their message ahead of the broadcasts. The President and his aides knew they had to move quickly to change the situation before those interviews.

“I called the White House, and the White House called around to, I think, each of us who had been negotiating and said, ‘OK, look: We’re going to make clear exactly what the President means,'” Sen. Mitt Romney, a Utah Republican, said Sunday once the smoke had cleared.

Among the aides reaching out were Steve Ricchetti — Biden’s longtime adviser whom the President credited with leading a “skillful negotiation” with Congress — and Louisa Terrell, the White House legislative affairs director who had spent the previous several weeks in talks on the plan.

In their conversations, the aides sought to assure Republicans that Biden would walk back what he said. But it eventually became clear that nothing short of the President himself clarifying his stance would suffice.

So, as he has done many times before, Biden corrected his course. In the lengthy statement drafted over the course of Saturday, he acknowledged Republicans were “understandably upset” by his comments.

“My comments also created the impression that I was issuing a veto threat on the very plan I had just agreed to, which was certainly not my intent,” he wrote.

It appeared to work.

Republicans emerged on Sunday to say they were satisfied the President was fully behind the bipartisan deal.

“I think the waters have been calmed,” Romney said on CNN.

The episode came to represent one of the larger self-inflicted dust ups of what had been a highly disciplined presidency. After decades of blunders, Biden has mostly avoided the type of loose remark that has for years caused his aides heartburn and led to a practiced system of clean-up.

In part, Biden had been helped by pandemic-era restrictions that limited the types of events where he could, as he puts it, get in trouble by “saying all that I mean.” But he’s also been cosseted by advisers who shout down reporters’ questions and provide prepared scripts on notecards for nearly every public event — both which he regularly chooses to ignore.

Even after his weekend statement, White House officials remained careful to avoid saying what exactly Biden would do if he received one bill without the other. Privately officials decided that going forward they would punt the sequencing to congressional Democratic leaders while keeping their focus on selling the bill.

“The President is eager to sign both pieces of legislation into law,” press secretary Jen Psaki said in Monday’s briefing, repeating the phrase in various iterations at least four times.

It’s a scenario that has played out innumerable times over his political career, even in the more scripted confines of a presidential campaign and serving in the executive branch.

Biden’s current team got experience cleaning up a sensitive situation when, as a candidate last year, he told an interviewer that any Black voter having difficulty deciding between him and Donald Trump “ain’t black” — a comment he apologized for a few hours later.

Other examples have aged better with time. Biden’s 2012 endorsement of same-sex marriage on NBC’s “Meet the Press” blindsided White House aides and President Barack Obama, who hadn’t yet staked out that position. But in retrospect he was at the forefront of the Democratic Party’s evolution on the issue.

Former aides say Biden’s habit of going off script reflects his desire to stay true to himself and his plain-spoken reputation. But they admit it often causes anxiety among staffers watching in the wings, who usually recognize quickly when something he says will require clean-up.

That has been true since Biden was a senator and later as vice president, when his selection as Obama’s running mate came with the acknowledged risk he could distract with an ill-advised remark.

“Biden’s entire reputation is built around candor and the idea that he’s telling it like it is,” said one former official. “The problem comes when he says things out loud that don’t necessarily need to be said out loud.”