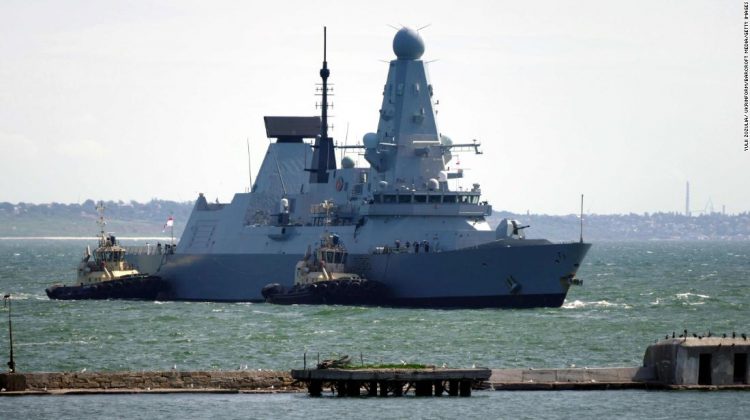 Environment Secretary George Eustice disputed claims from Moscow that Russian warplanes dropped bombs and a patrol boat fired warning shots at a British destroyer it claims entered into its territorial waters in the Black Sea.

“This is a very normal thing,” Eustice told Sky News. “It’s quite common, actually, what was actually going on is the Russians were doing a gunnery exercise and given prior notice of that, they often do in that area. So I think it’s important that we don’t get carried away.”

Russia said the UK’s HMS Defender went three kilometers (1.9 miles) inside what it described as its territory off Cape Fiolent in Crimea, just before noon on Wednesday. A nation’s territorial waters extend 12 nautical miles (22.2 kilometers) from its coastline; any foreign warship going past that limit would need permission of the country to do so, with a few exceptions.

Russia annexed Crimea from Ukraine after a military intervention in the region in 2014. The international community opposed that annexation, and still considers Crimea as Ukrainian territory.

Eustice insisted the vessel was making a legal passage under international law to Georgia via Ukraine. Asked if the UK would sail through disputed Ukrainian waters again, he replied: “Yes … because we never accepted the annexation of Crimea.”

On Thursday, Kremlin officials accused the UK of a “deliberate, planned provocation” and said it had the right to “bomb on target” when foreign ships violate its sea borders.

Kremlin spokesman Dmitry Peskov said on a conference call with journalists that Russia is “obviously concerned about such actions of the British ship.”

“What can we do? We can appeal to common sense, demand respect for international law. If this does not help, we can bomb not only in the direction, but also on target, if our colleagues do not understand,” Russian deputy foreign minister Sergey Ryabkov said, according to Russian state media TASS..

A BBC reporter on the ship said he witnessed Russian warplanes and naval vessels buzzing the destroyer during the flare-up on Wednesday.

Shortly after the British ship crossed the territorial boundary, an Su-24M attack jet dropped bombs and a coastal patrol ship fired warning shots in front of the British destroyer, the Russian defense ministry said in a report from Russian state media TASS.

But British officials pushed back on the Russian allegations, and Eustice continued to play them down on Thursday.

“I don’t think they were warning shots. There was a military exercise that was taking place, and it’s not uncommon for the Russians to do this in this area, and therefore the incident is not particularly abnormal in that sense,” he said.

The UK defense ministry had previously denied Moscow’s accusation, saying that its ship was making a legal and innocent passage.

The UK ambassador to Moscow was due to visit the Russian foreign ministry Thursday after being summoned over the incident, spokeswoman Maria Zakharova said on state TV. On Wednesday, Zakharova accused the UK of spreading lies about the incident.

A move watched in China

The incident in the Black Sea will be watched further afield, with Europe, the US and China all likely observing Britain’s response, experts told CNN.

German Chancellor Angela Merkel urged the EU to stand together against “provocations” from Russia, but also to seek direct talks with Russian President Vladimir Putin, saying the bloc “needs to create a formats for dialogue.” Her comments on Thursday echoed similar remarks from French President Emmanuel Macron on Wednesday, and follow a recent summit between US President Joe Biden and Russian leader Vladimir Putin.

“This is a moment that comes just as France and Germany now, to the surprise and disconcertion of a number of smaller EU countries, are trying to establish some sort of new relationship with Russia,” said Nigel Gould-Davies, Senior Fellow for Russia and Eurasia at the International Institute for Strategic Studies (IISS) in London. “If Britain still were in the EU, it would have been in a position to have warned against this.”

The UK “has very much gone in the other direction” from France and Germany with its decision to sail through the Black Sea, James Nixey, Director of the Russia and Eurasia program at Chatham House, told CNN.

“Russia does revel in and understand the value of theatricality,” Nixey added. “The message to (the West) is: ‘We will not be restrained by internationally imposed rules.'”

The Kremlin likely also had a domestic audience in mind, some experts said. “It would be unusually risky to take the sort of actions that Russia claims to have taken — including dropping bombs in front of a foreign vessel,” Sidharth Kaushal, a research fellow in Sea Power at the Royal United Services Institute (RUSI), told CNN.

“The Russians have been working to push the narrative that the Royal Navy acted provocatively and was driven away — which might be both for domestic consumption and to reinforce international perceptions of Russia’s red lines,” he said.

The tensions may also have implications for China. HMS Defender is part of the Carrier Strike Force, which is set to soon move towards the South China Sea — where China has has transformed obscure reefs and sandbars into man-made artificial islands, fortified with missiles, runways and weapons systems.

“China will be looking to see if the British are as bold in the South China Sea as they are in the Black Sea,” Nixey said. “That is a can of worms that the UK may be less willing to open by comparison.”

Tensions there between the US and China most recently flared up in April, when US-Philippine training exercises took place and a Chinese aircraft carrier entered the region.