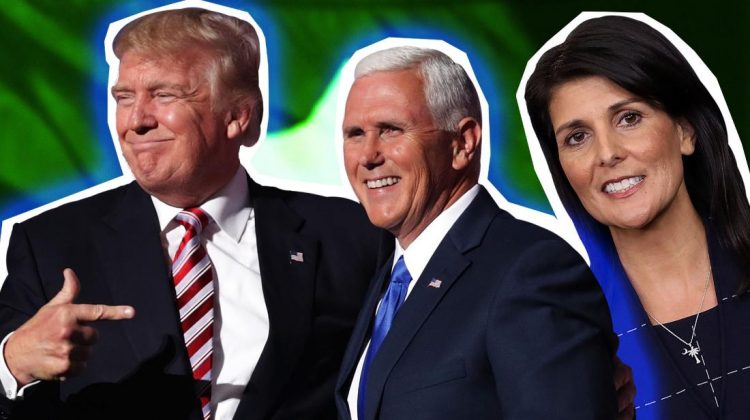 Former South Carolina Gov. and UN Ambassador Nikki Haley tried to walk that line this week — while she was barnstorming Iowa.

“In 2022, we’re not stopping until we take back the House and Senate,” Haley said during her keynote speech at the Republican Party of Iowa’s annual Lincoln Dinner on Thursday. “And after that, this Republican Party and the American people will take back our country from Joe Biden and the radical left.
Haley insisted that “there are a lot of reasons to come to Iowa.” Sure, Jan. It’s not even Iowa State Fair season! But ’tis the season to court GOP party faithful and build a base of support that can later be tapped in case of a run for president. Which is exactly what Haley is doing, even though she has said she would bow out of contention if Trump decided to run again.

Former Vice President Mike Pence is really trying to have it both ways, praising Trump as “one of a kind” in a room full of Republicans at the Ronald Reagan Presidential Library in California on Thursday.

Yet Pence then failed the key — and, really, only — litmus test for the quest to be Trump’s true heir apparent. He criticized Trump’s efforts to overturn the election results on January 6.

But Pence and Haley aren’t the only familiar Republicans from the Trump years hoping to carve out space on the 2024 campaign trail — with varying levels of success.

* Arizona Gov. Doug Ducey ran afoul of Trump for doing his job by certifying Arizona’s 2020 election results wherein voters elected Joe Biden over Trump. (TBT to this very awkward phone call.)
As of late May, the two were not on speaking terms, according to CNN’s Gabby Orr, and, based on Trump’s latest dumping on Ducey’s would-be US Senate run in 2022, it doesn’t look like the relationship has gotten any better.
* Florida Gov. Ron DeSantis got some attention recently for signing measures into law that would require high school curriculums to teach the evils of communism and socialism. Subtle!
Between his eagerness to wade into broader hot-button issues and his well-received Covid-19 response, DeSantis’ efforts seem to be paying off among party faithful. In a (not exactly scientific) straw poll gauging support for potential 2024 candidates, DeSantis narrowly bested Trump for first place.
The Point: Would-be challengers are awkwardly threading the needle of fealty to Trump while trying to offer themselves as a Trump alternative, all while Trump himself hits the road this weekend.