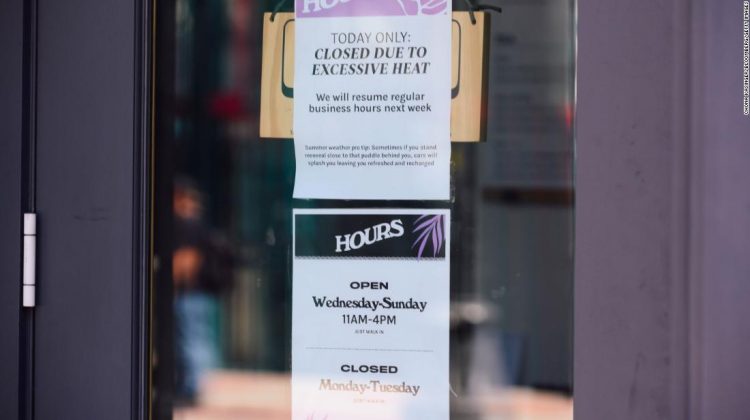 Across the region — including Portland, Oregon, and Seattle — the high temps have resulted in a pause on some normal activities.

In some areas, outdoor pools are closed. In others, a lack of air conditioning has become problematic.

Here’s how the heat is impacting residents in these areas.

‘I’ve never seen it this hot’

In Washington, pictures on social media show some sidewalks and roads buckling, potentially due to the high temperatures.

“I’ve lived here most of my live and I’ve never seen it this hot,” Bart Treece, spokesperson for the Washington State Department of Transportation, told CNN.

“The issue of pavement buckling is not something that is specific to the Seattle area and Washington State. It’s hard for us to be proactive because we don’t really know where it will happen.”

Treece said crews are working to repair any issues that come up in order to keep the roads in good condition.

Portland has closed its outdoor pools due to deck temperatures — but splashpads and indoor pools are all available for use.

Relief may come in the form of a breeze off the coast as marine air moves south to north along the coast, according to the National Weather Service (NWS).

Power outages in Portland, lack of AC in Seattle

The Seattle’s mayor’s office told CNN “one of the most significant concerns about extreme heat in the Seattle area is the well reported-on lack of personal and commercial A/C in the City.”

“Seattle ranks as the least air-conditioned city among the top 15 metro areas. That makes it challenging for many residents to stay home,” the mayor’s office said in a statement.

The record-breaking heat forced many Seattle restaurants to close temporarily, according to CNN affiliate KING5.

In Portland, power outages and issues due to the heat have kept the Portland streetcar closed, the Portland Bureau of Transportation told CNN. The department is “encouraging folks to stay home and stay cool.”

“We’ve also had intermittent power outages that have impacted a few of our traffic signals,” the bureau said.

The Oregon Office of State Fire Marshal is also suspending regulations that prohibit the self-serve of gasoline at retail gasoline service stations for 48 hours so workers don’t have to be in the heat.

Extreme heat is a pernicious example of the climate crisis, killing more people on average every year than any other weather-related event.

The Pacific Northwest is not prepared for more frequent heat waves, according to experts and researchers.

But by the middle of this century, the number of days that hit or exceed 90 degrees there is expected to increase from a current average of around six to 16, according to a study from the Union of Concerned Scientists.