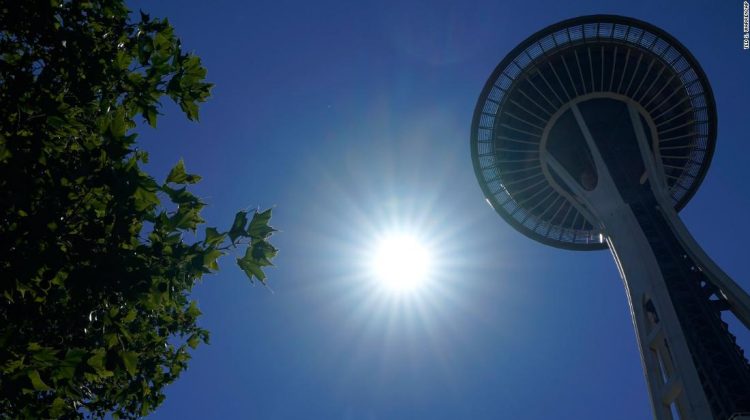 Growing up in Portland, Oregon, Oswill has become more concerned about the extreme weather changes from wildfires to heat waves she’s seeing year after year.

The 44-year-old mother of two likens it to a pandemic, but never-ending.

“It’s like a lockdown, but we’re not going to solve it by putting on a mask or getting a vaccine,” Oswill told CNN. “It’s just sort of perpetual. It’s scary.”

Portland set an all-time record high temperature three days in a row. Seattle also bested its own record, set Sunday. Across the border, Lytton, British Columbia, also broke all time records on Sunday and Monday, registering temperatures that were a shocking 48 degrees above normal.

Kristina Dahl, a senior climate scientist at the Union of Concerned Scientists, says the heat wave is “unprecedented.”

“We saw heat records over the weekend only to be broken again the next day,” Dahl told CNN, “particularly for a part of the country where this type of heat does not happen very often.”

Experts like Dahl and Mann say climate change is reshaping the planet’s weather patterns. As humans emit more planet-warming greenhouse gas into the atmosphere, more energy is added to the climate system. The excess energy, according to Kristie Ebi, a climate and health researcher at the University of Washington, appears by way of extreme weather events.

“Heat waves have always occurred and will always occur, but we’ve got a very different pattern of heat waves now than we did a couple of decades ago,” Ebi told CNN. “And it’s not just the intensity, it’s also the geographic extent.”

In the opposite end of the country, over 40 million people in the Northeast US are also under heat advisories, including the New York, Philadelphia and Boston metropolitan areas. Though the heat won’t be as bad as Oregon and Washington, records for the date could be set in the Northeast before temperatures cool off on Thursday.

Extreme heat is of the deadliest consequences of climate change, killing more people than any other weather related event.
Kate Weinberger, an environmental epidemiologist at the University of British Columbia, analyzed the number of deaths related to extreme heat in the US each year. A 2020 study, on which Weinberger was lead author, found an underestimated number of heat-related deaths in the country, since records typically only look at medical terms such as heat stroke, and neglects other potentially heat-related causes of death, like heart attacks.

“Heat likely contributes to many more deaths from causes other than heat stroke, because heat can exacerbate other chronic diseases, such as heart and lung conditions,” Weinberger told CNN. “Given the danger posed by heat, events like the ongoing heat wave in the Pacific Northwest need to be taken very seriously.”

Officials in Multnomah County, home to Portland, told CNN as of Monday morning there were at least 43 heat-related emergency department and urgent care clinic visits in the county on Friday, Saturday and Sunday. The sheriff’s office said Monday that “ambulances are stretched thin due to demand.”

“Normally we would expect about 1 or 2 visits for heat illness in the same time period,” Kate Yeiser, communications coordinator for Multnomah County, told CNN in an email. “The visits this weekend alone represent nearly half the heat illness visits we typically see during an entire summer.”

One appalling aspect of heat-related deaths in the US is the number of premature mortalities brought by heat exposure, particularly among babies and children left unattended in cars.

A 2020 study published in the journal GeoHealth, which Ebi co-authored, found large increases in the number of premature deaths in the US each year due to heat exposure as the planet warms.

“Many don’t understand how fast cars heat up and how babies physiology can’t tolerate that,” Ebi said. “Ensuring that people are really aware about protecting babies and children during these heat waves is important.”

To understand how the climate crisis is changing the playing field, Mann suggests thinking of weather events on a bell curve. The highest point of the curve is where the most common weather takes place and the tails are where the extreme events lie. A warming planet shifts the bell curve to the right, pushing the already-extreme events into uncharted territory.

Mann says that climate models, which predict general global conditions well into the future, can well-capture the shift and predict increases in extreme heat. But, he said, they do not paint a full picture of the impacts of climate change during the summer.

“This is an area where current generation models are not capturing a real-world climate connection,” said Mann, who was also the lead author of a study that shows climate change is causing the summer’s jet stream — fast-flowing air currents in the upper atmosphere that influence day to day weather — to behave oddly.

“In that sense, climate models are actually underestimating the impact that climate change is having on events like the unprecedented heat wave we’re witnessing out West right now,” Mann added.

Climate change can cause the jet stream to get locked into a static wave pattern during the summer. Daniel Swain, a climate researcher at the University of California at Los Angeles, says this is best illustrated by flicking a jump rope up and down until its waves seem to stand still. Similarly in the atmosphere, high and low pressure systems can get stuck, creating extreme weather events like severe heat, drought or wildfires.

That’s what happened in the Pacific Northwest this weekend, where a so-called heat dome, a strong ridge of high pressure, acts as a lid on the atmosphere. The lid traps the hot air trying to escape, and warms it even more as it sinks.

“Even if the jet stream does what it historically used to do, with no specific climate change contributions, climate change is still dramatically increasing the likelihood of these extreme heat events,” Swain told CNN. “If you warm the atmosphere, you’d expect those heat waves to be hotter than they otherwise would have been.”

If the US fails to slash planet-warming emissions and improve climate adaptation systems, climate experts say people across the US and around the world are going to experience more severe impacts of extreme heat.

By the middle of this century — 2036 to 2065 — vast swaths of the US that don’t typically experience extreme heat such as the upper Midwest region and New England are set to face severe heat on a regular basis, according to a study from the Union of Concerned Scientists which Dahl co-authored.

“When we look at where we’re heading in the future, our analysis has shown that if we fail to reduce our heat-trapping emissions, we are poised to see a staggering expansion of dangerous heat across the US,” Dahl told CNN.

But, she adds, if the US aggressively reduces emissions as well as limit future global warming to 2-degrees Celsius, we can “spare millions of people in the US and many more around the world from relentless summer heat.”

Camila Bernal contributed to this report from Portland.