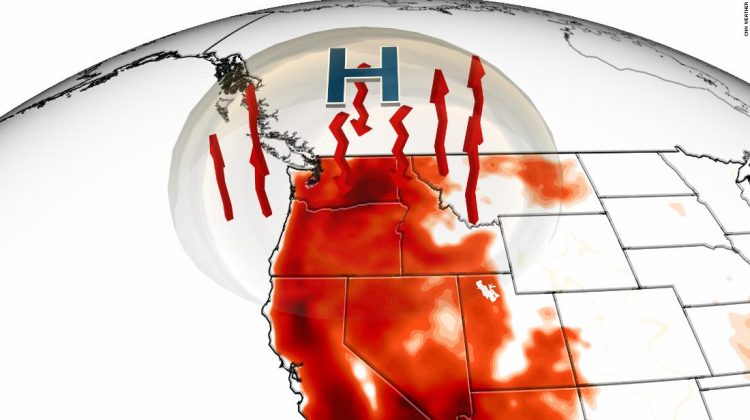 As temperatures surge into the triple digits, Seattle could feel more like Las Vegas, while Portland could experience Phoenix-level warmth in an area where having air conditioning isn’t always the norm. Dozens of heat records — including some all-time records set decades ago — are forecast to fall in Oregon, Washington and Idaho, all in the first week of summer.

“Usually, the hottest time of the year [in Washington] lags a month after the solstice,” Rocco Pelatti, a meteorologist at the National Weather Service in Spokane, told CNN Weather. “July is usually the hottest month; sometimes, it bleeds into August. To have June start out like it has is very concerning.”

The heat will rise toward uncharted territory in Seattle and Portland. By late weekend, high temperatures could be 25 to 30 degrees above what’s normal for this time of year.

Seattle’s average high in late June is 72 degrees, while Portland typically enjoys 75-degree afternoons this time of year. Forecast models suggest high temperatures could be near or above 100 degrees for the two cities from Saturday through Monday.

Seattle has maintained weather observations since 1894. During that time, the city has eclipsed the 100-degree mark on only three occasions. It’s forecast to hit 100 three days this weekend alone.

The mercury in Seattle rarely climbs above 90 degrees. As a result, the hottest June temperature ever observed at Seattle-Tacoma International Airport — 96 degrees in 2017 — will also be in jeopardy this weekend.

Much like the Southwest heat wave last week, a massive ridge of high pressure — colloquially referred to as a heat dome — will be responsible for the torrid heat. But unlike the Southwest, millions of people in the Northwest do not have air conditioning in their homes.

“In this area, not many people have A/C, so we don’t have the relief that we can get in other places that get this hot,” said Mary Butwin, a meteorologist for NWS Seattle.

Least air-conditioned city in the US

The heat could be lethal in Seattle and Portland, which rank first and third respectively for major US cities with the fewest air-conditioned households. A US Census Bureau study in 2015 found that only 33% of Seattle-area homes were air conditioned.

The lack of A/C in Seattle — a city known for its tepid summers — has not historically been a problem. Between 1971 and 2000, the city averaged only three 90-degree days each summer. However, from 2015-2018, the average number of 90-degree days increased to 10 each summer.

Not surprisingly, the US Census Bureau updated its findings in 2019, revealing that A/C adoption in Seattle had risen to 44%, an 11% increase in A/C units installed since just 2015.

“What makes this heat wave unique from others we’ve had in the area is the lack of a marine influence in the overnight hours,” said Samantha Borth, a meteorologist at NWS Seattle.

With its proximity to Puget Sound and the Pacific Ocean, overnight temperatures can fall into the 50s, even on the hottest summer days.

Since records began at Sea-Tac airport in 1945, there was only one night that failed to drop below 70 degrees: the morning of an infamous 103-degree afternoon in July 2009. Come Sunday and Monday, the record books could include two additional 70-degree mornings, making for an unbearable weekend for the households without A/C.

An even more oppressive heat wave is looming in Portland.

From Saturday to Monday, forecasts are pointing to high temperatures in the range of 100 to 110 degrees in Portland, likely breaking the all-time June mark and threatening the overall maximum temperature on the first full weekend of summer.

“With all three days, we would be breaking the June highest temperature record, and if we do reach the 107, we would be tying the all-time warmest day ever recorded in Portland,” said Lisa Kriederman, a meteorologist at NWS Portland.

As the massive dome of high pressure strengthens, the air will compress and heat up, like the warmth felt on a bike pump while pumping a tire. That, combined with dry winds from the deserts of eastern Washington and Oregon, will potentially send the mercury to near all-time records in both states.

In Spokane, temperatures are likely to top 100 degrees well into next week.

“We haven’t seen anything like this in a while,” Pelatti says. “For the Spokane area, we are forecasting 108 for Monday and Tuesday. Even after Tuesday, it still looks like it will stay hot, with temperatures in the 100s.”

The last time Spokane had a consecutive number of days over 100 was in 1928.

“Saturday, Sunday, Monday, Tuesday, we have temperatures exceeding 100 degrees,” Pelatti says. “Guidance suggests that the temperatures still stay above 100 after Tuesday for a number of days, so it could possibly exceed six.”

Similar to Washington and Oregon, Idaho will see blistering record heat well into next week.

“Right now, we’re looking at 105 to 110 in snake basin of Idaho and the Treasure Valley,” said Korri Anderson, a meteorologist with NWS Boise. “We could be breaking all-time records in Boise on Tuesday and Wednesday of next week.”

The all-time record at Boise is 111 and Ontario is 113, Anderson adds. “So we could be flirting with those next week.”

An excessive heat watch has been issued for more than 11 million people in parts of Washington, Oregon and Idaho. In the Columbia Basin, the region’s typical hot spot, the high temperature forecast is between 110-112 degrees this weekend.

These temperatures would be within striking distance of state records for Oregon (117 in July 1939) and Washington (118 in August 1961).

Extreme heat to become the norm in the Northwest

Parts of the Northwest could see the average number of 105-degree days increase from 0 to 2 in as little as 15 years, according to a recent study.

Without any intervention, that number would increase to an average of five days by late century, while 90-degree days would increase from roughly six days to 37 days each year in that same period.

“We always have a chance of extreme heat, particularly in the summer,” Katharine Hayhoe, the chief scientist for the Nature Conservancy, previously told CNN. “But as the world warms, we see that summer heatwaves are coming earlier, lasting longer, and are becoming hotter and more intense.”