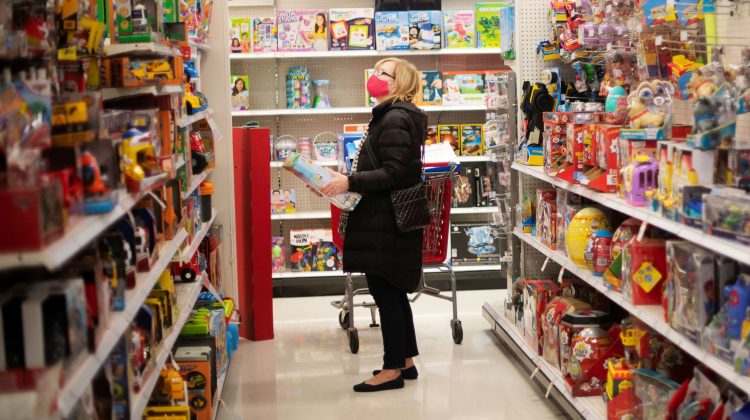 A shopper wearing a face mask due to the coronavirus disease (COVID-19) pandemic browses toys at a Target store in King of Prussia, Pennsylvania, November 20, 2020.

There may be fewer boxes under the tree this holiday season, as toymakers grapple with the possibility of a massive shortage in everything from dolls and action figures to vehicles and puzzles.

The coronavirus pandemic created a bottleneck in the global transportation pipeline, which was later worsened by the blockage of the Suez Canal in March. These shipping delays have hit almost every industry, including electronics, apparel and food.

Exacerbating these troubles is a fresh wave of Covid outbreaks in China. All the while, inventory continues to pile up, leading to manufacturing delays. With shipping containers scarce — or worse, more than double pre-pandemic prices — toymakers are faced with tough decisions ahead of the industry’s most important sales season.

“We’re not seeing any panic yet about the flow of holiday goods,” said Jefferies analyst Stephanie Wissink.

She noted that toy companies are just entering the ramp-up period of production for products that ship in September and October for the holidays.

“If we see persistent constraints into late-summer, then we will start to worry a bit more,” Wissink said.

Currently, the industry is seeing delays of two to three weeks, Wissink said. This is consistent with a report from Davidson analyst Linda Bolton Weiser that was published Friday, although Weiser said delays could be as long as a month.

Weiser told CNBC that the toy industry has faced shipping challenges in the past and persevered. She noted that several years ago, there was a workers strike at the Port of Los Angeles that threatened holiday sales.

“Toy stocks tanked, but [Christmas] went off without a hitch,” she said. “Toy companies were able to get their toys loaded on the tops of freighters and unloaded the fastest.”

Weiser said her most recent chat with Mattel a few days ago indicated the company was “still quite confident about their sales growth for the year.”

Representatives for Hasbro and Mattel did not immediately respond to CNBC’s request for comment.

Toy companies are keeping a careful eye on developments overseas, hoping that pressure on the ports will loosen as vaccines are more widely distributed globally, outbreaks are more isolated and more air traffic routes reopen.

For now, toy companies have not passed on additional shipping costs to the customer, Wissink said. However, there is always a possibility that this could change if the shipping situation does not alleviate.

“We note that holiday purchases are very much oriented toward gifting so price sensitivity is somewhat less,” she said. “That said, consumers will notice if there’s a dramatic increase in prices, but we don’t expect that at this stage.”