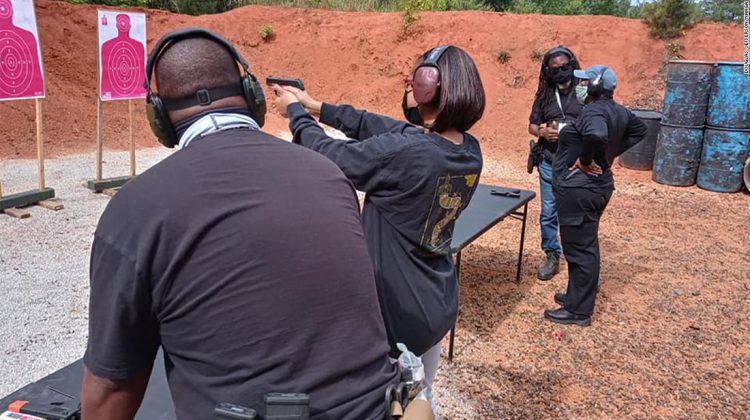 “I think the rhetoric and how things are stirred up in the country just made me feel like, if not now, then when,” Roberts told CNN Sunday morning at the South River Gun Club in Convington, Georgia, with gun shots ringing nearby.

It was Ladies Day at the range, an event put on by the National African American Gun Association’s Atlanta (NAAGA) chapter. More than a dozen women, some for the first time, came out to work on their shooting and learn about firearm safety — and to have fun doing it.

All but one of them is African American.

About 40% of gun buyers in 2020 purchased a firearm for the first time, according to the National Shooting Sports Foundation (NSSF), an industry trade group that compares the FBI’s background check data with sales data.

“Today’s gun buyer is shattering tired and worn-out stereotypes of who owns a gun,” Oliva said in an email. “Today’s gun owner is younger, includes more women, more minorities and doesn’t just look like the rest of America. They are America.”

Philip Smith, president of NAAGA, said his organization has seen “dramatic growth — probably well over 58% in the last year.”

“We’re buying guns in bunches, all over the country, at the same time, day in and day out,” he told CNN.

NAAGA is seeing about a thousand new members every month, Smith said, and they come from all walks of life — plumbers, mechanics, teachers, doctors and lawyers.

“They want training,” he said. “They want education.”

Black firearms experts and enthusiasts who spoke to CNN pointed to several factors for the rise in gun purchases among African Americans. Chief among them is the social climate in the United States, particularly in light of the Covid-19 pandemic and the unrest last year following the police killing of George Floyd.

Mark Major, the owner of 2-Swords Tactical Defense, a store in Lithonia, Georgia, said he was not surprised by the uptick in purchases among African Americans.

“Whenever there’s social unrest or people are concerned about their own safety, the lightbulb kind of goes off when they realize that they may not be able to wait for the police,” he said.

About 90% of Major’s clientele is Black, he said. At the moment, most are brand new to firearms and many are women. They’re coming to his shop east of Atlanta with questions about which gun might be right for them, how to use a gun and how to store one safely, he told CNN.

“There’s a lot of newbies that are really interested and really want to know and are really serious about protecting themselves and their families,” Major said.

‘You have a right to the Second Amendment’

Smith also credited a “maturation process within the Black community” for the spike in purchases.

“The narrative is changing,” he said.

Previously, a Black gun owner — or someone curious about purchasing a firearm — might be worried about a certain stigma, he said. Smith said that five years ago, Googling the words “Black” and “gun” would result in “gangsters” with “grilled out teeth” and tattoos.

“Not that that’s wrong, per se, but if that’s the total image you have of us, that’s a bad thing,” he said. “Now Black folks are starting to understand, it’s OK to have a gun.”

But Smith acknowledged that there are a “different set of rules” for Black gun owners. NAAGA is supportive of law enforcement, but that’s also true when it comes to their interactions with law enforcement.

Smith pointed to the fatal shooting of Philando Castile, a Black man who was fatally shot in Minnesota in 2016 after he informed a police officer during a traffic stop that he had a gun in the car.

The officer, who was later found not guilty of second-degree manslaughter in the shooting, testified he opened fire because he claimed Castile, who was licensed to carry, put his hand on the firearm instead of his wallet or ID. Castile’s fiancée testified he was reaching for his license and registration.

Castile’s death left Smith heartbroken, he said. But that shouldn’t stop people from purchasing a gun and getting educated if they want to, he said.

“You cannot sit back and let somebody dictate your reality and put their values on you,” he said. “If someone is uncomfortable with you carrying a gun and you’re doing everything that’s lawful, that you’re supposed to, that’s their issue.”

“You have a right to the Second Amendment,” Smith said.

Members of African American communities are coming to that realization, Major said. “We’re starting to understand that we can protect ourselves, and there’s a way to go about it,” he said.

Back at the range in Covington, Carla Russell said that picking up a firearm gives her a feeling of “self empowerment,” knowing she has the skill to protect herself.