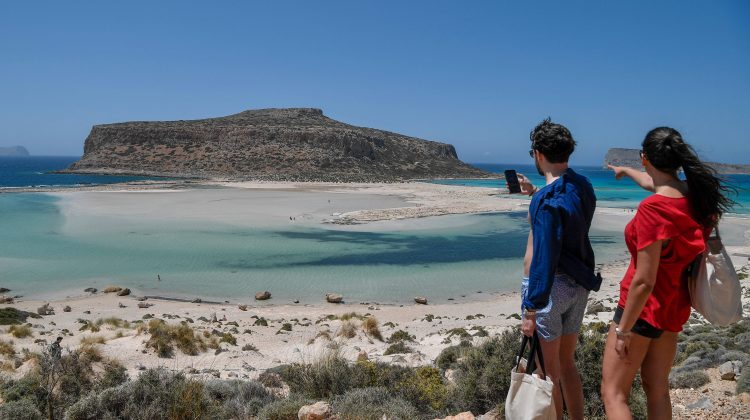 A couple of tourists looks at the Balos beach and its lagoon in the north west of the island of Crete, on May 13, 2021.

LONDON — Euro zone business activity has grown at its fastest pace in 15 years this month, according to preliminary data released Wednesday.

The 19 economies have recently taken different steps to reopen their economies as the vaccination programs continue to accelerate. France has, for instance, lifted a night curfew and the need to wear a face mask outdoors. Italians are now able to have their coffee standing at a counter, as is their tradition, after indoor dining resumed. In addition, more tourists are now being welcomed into the region.

IHS Markit’s flash composite PMI for the euro zone, which looks at activity across both manufacturing and services, hit 59.2 in June versus 57.1 in May. A reading above 50 represents an expansion in economic activity.

“The eurozone economy is booming at a pace not seen for 15 years as businesses report surging demand, with the upturn becoming increasingly broad-based, spreading from manufacturing to encompass more service sectors, especially consumer-facing firms,” Chris Williamson, chief business economist at IHS Markit, said in a statement.

The European Central Bank estimated earlier this month that the euro zone would grow at a rate of 4.6% this year and 4.7% next year — a stronger outlook from its March assessment.

However, economic uncertainty remains, notably due to the delta coronavirus variant which is leading to higher infections, and also labor market shortages — even in nations with a relatively high unemployment rate.

The flash France composite output index came in at 57.1 in June, from 57.0 in May, representing a 11-month high. The latest lifting of Covid-19 restrictions contributed to a higher number of sales. Also, new orders placed with manufacturers experienced one of the fastest increases since the pandemic hit in 2020.

“With vaccination rates on the rise, survey data suggest that firms are becoming more confident that the stage is set for an economic recovery,” he said, while adding that “the recovery could run into some speed bumps if the supply-side is what is ultimately holding the economy back.”

Meanwhile, the flash Germany PMI composite output index reached 60.4 in June from 56.2 in May — hitting a 123-month high.

“The further loosening of Covid-19 restrictions has given an additional boost to the recovery of the German economy, with the ‘flash’ PMI rising steeply to its highest for over a decade. And with containment measures set to be lifted further in July, this strong momentum is on course to carry over to the third quarter,” Phil Smith, associate director at IHS Markit, said in a statement.