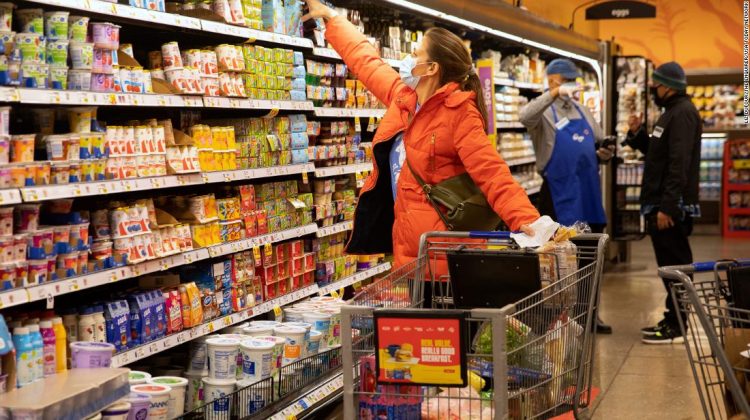 The rising prices for staples like milk and pork affect grocery stores too, as they have to pay more to their suppliers. But while they are raising prices under the guise of increasing supplier costs, they’re adding a little extra on top of that.

When grocery stores’ costs rise, stores will “mark up the full rate of inflation plus a little bit more,” said Burt Flickinger, the managing director of retail consultancy Strategic Resource Group. For example, if the price of meat that a store pays to its suppliers goes up 6 cents a pound, the store might raise the price it charges for that same meat by 10 cents.

Stores are betting most customers won’t balk at price increases because they need to buy groceries, after all, and will still consider shopping a bargain compared to eating out at restaurants. Prices for food at restaurants are growing faster than prices at grocery stores, according to Labor Department data, giving grocers more flexibility to charge you extra.

And once the stores feel like they’re safe raising prices a little — well, are you really going to notice if that gallon of milk you’re buying has gone up to $3.85 instead of the $3.76 that the store could charge if it wanted to keep its margins steady? Nine cents on a single gallon probably makes little difference to anyone who isn’t on a tight budget or doesn’t want to do math in the milk aisle, but a store selling a lot of those gallons will eventually see a nice boost.

Inflation is the “greatest gift the supermarket sector could get,” said Flickinger. “They have not had these inflation benefits in years.”

Soaring demand, coupled with supply chain issues and materials shortages as the economy ramps up, is driving prices higher. Food prices for consumers increased 2.2% in May from the same month last year, according to the Labor Department. Pork prices rose 3.2%, fish and seafood prices rose 1.9% and milk prices rose 4.6%. Prices for fruit and vegetables grew 2.9%, including a 9% jump for citrus fruits.
Leading grocery chains such as Kroger (KR) and Alberstons have said in recent days that they expect to benefit from rising prices. Sales boomed at these chains and other grocers during the early stages of the pandemic, but have slowed down in recent months as more people return to eating meals out.

“Our business operates the best when inflation is about 3% to 4%,” Kroger CEO Rodney McMullen said on an earnings call with analysts Thursday. “A little bit of inflation is always good in our business.”

Kroger can pass off costs to consumers when inflation hovers around that mark, McMullen said, and “customers don’t overly react to that.”

“Businesses like ours have done well when in periods where the inflation was 3% to 4%,” Albertsons CEO Vivek Sankaran said at an investor conference Tuesday.

Sankaran did not specify why inflation would help Albertsons, but his “sense is this inflation will just be passed through” to customers. Albertsons did not respond to a request for further comment.

There is a risk to grocery stores from inflation running too high though.

If prices on an item rise above 4%, customers may skip buying it, hurting grocers’ sales, said Joseph Feldman, an analyst at Telsey Advisory Group. Consumers may also trade down to cheaper brands or buy smaller pack sizes if inflation runs too hot, both analysts and grocers noted.

Sankaran said customers will be able to afford higher prices because the economy is growing and consumers have cash to spend.

“We’ve never had an environment like this with such a strong consumer where inflation goes higher,” he said. “And inflation will have to go really high for it to start mattering where the consumer starts clamping down on purchases.”

Other retailers have also said they expect to benefit from rising inflation, but for different reasons.

Discount toy chain Five Below (FIVE), for instance, expects budget-conscious consumers will increasingly turn to discount stores as prices go up around them.

“As far as inflation goes…I think it’s an advantage for a value retailer like us,” Five Below CEO Joel Anderson said this month.