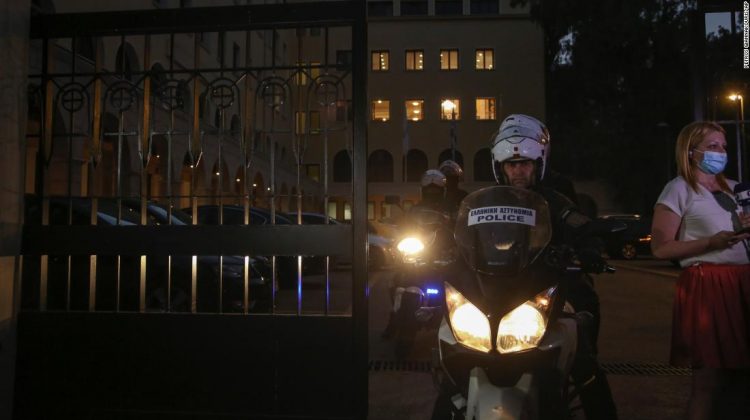 He has since been moved to an Athens psychiatric hospital and is under police guard, according to Greek police spokesperson Anna Efthymiou.

Seven senior members of Greece’s Orthodox Church and three other people were hospitalized with burns following Wednesday’s attack, she added.

The unnamed priest is accused of drug-related offenses and was facing a disciplinary hearing over his alleged behavior, according to multiple reports in Greek media.

A police officer who helped restrain the suspect was slightly injured, as were a lawyer and a presiding clergyman, police said.

The victims have been treated for burns and several have been discharged from hospital.

The suspect was already facing accusations of troubling behavior. “When the priest left the village and we cleaned the house where he had been staying syringes and substances were found,” said Spyros Kotsiadis, a community leader in the village of Agia Varvara, according to Greek TV channel Skai.

Agia Varvara is near the northern town Veria, where the priest was stationed. Kotsiadis said the man repeatedly borrowed money from community members which he failed to repay.

He added that the 37-year-old had allegedly threatened a clergyman who replaced him in the village. The priest was due to testify in front of a prosecutor on Thursday, following the attack.

That hearing has been postponed until his psychological condition can be assessed. Greek authorities maintain that he is in no position to testify presently.

The police case file has yet to be sent to the prosecutor’s office, so consequently official charges have not been filed.

Greece’s Health Minister Vasilis Kikilias described the attack as “a tragic event.” The country’s president Katerina Sakellaropolou, tweeted: “I express my disgust for this unprecedented incident and wish the victims a speedy recovery.”