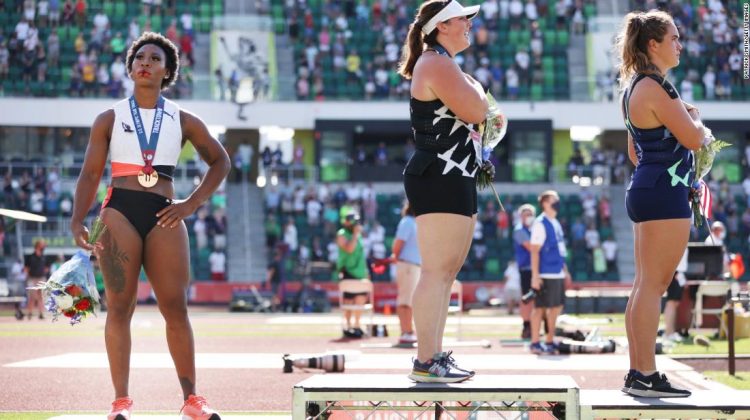 Prominent members of the GOP are outraged that hammer thrower Gwen Berry silently turned her body away from facing the American flag while the National Anthem played at the Olympic trials in Oregon Saturday. Berry, who placed third and qualified for the Olympic team, was holding a bouquet of congratulatory flowers in one hand as she then held above her head a black t-shirt that said “ACTIVIST ATHLETE.”
In response to this peaceful protest, a vocal cadre of Republicans are livid. Rep. Dan Crenshaw said she should be kicked off the Olympic team. Fellow Texas lawmaker Sen. Ted Cruz tweeted, over an article about Berry, “Why does the left hate America?” Former Wisconsin Gov. Scott Walker tweeted, “What is wrong with people?” and added that when he was growing up, “everyone stood for the American flag.” Arkansas Sen. Tom Cotton tweeted, “If Gwen Berry is so embarrassed by America, then there’s no reason she needs to compete for our country at the Olympics.”
Then, somehow, this became an issue laid at the feet of the White House: On Monday, a Fox News reporter asked Press Secretary Jen Psaki about it. She said that while she hadn’t discussed it with President Joe Biden, “He is incredibly proud to be an American and has great respect for the anthem and all that it represents, especially for our men and women serving in uniform all around the world.”

She continued, “He would also say, of course, that part of that pride in our country means recognizing there are moments where we, as a country, haven’t lived up to our highest ideals. And it means respecting the rights of people granted to them in the Constitution to peacefully protest.”

For her part, Berry says she was “set up” — that she wasn’t told the anthem would play while she was on the podium. “I never said that I hated the country, never said that. All I said was I respect my people enough to not stand or acknowledge something that disrespects them. I love my people point blank, period.”

The plain fact is, her actions are protected under the very constitution that conservative “patriots” claim to revere, and it would be wildly inappropriate and frankly un-American to remove her from the Olympic team for exercising her rights to free expression and peaceful protest.

It’s particularly rich that many of the same conservatives who are criticizing Berry are also some of the chief whiners about so-called “cancel culture,” and that they have had much less to say about the very real acts of insurrection and attacks on America that have come from members and supporters of their own party. Supporters of election-loser Donald Trump stormed the Capitol complex on January 6, threatened to hang then Vice President Pence, and sent lawmakers — Republican and Democrat — frantically scrambling for their lives in a shocking assault on the seat of our democracy.

Nearly six months later, a majority of Republicans continued to believe the election was rigged and stolen, a lie stoked by the former president and the Republican Party itself.
It’s telling that Cruz is quick to suggest that Berry hates America for peacefully turning away from the flag, while he doesn’t suggest that supporters of his own party might hate America because they used that same flag to beat a cop as they violently attempted a coup. It’s telling that Cruz thinks that silently protesting America’s centuries-long mistreatment of African-Americans is “hatred,” but monuments to an army of racist, traitorous losers can be acceptable in the public square.
Berry’s other critics aren’t any better. Cotton infamously wrote an op-ed in the New York Times during protests after the killing of George Floyd urging then-president Trump to use the Insurrection Act to turn American troops against American citizens in “an overwhelming show of force”– an act that that would have more closely resembled China’s brutal crackdown in Tiananmen Square than the an affirmation of American freedom.
Dan Crenshaw rightly criticized those who attacked the Capitol on January 6th, but his words came cheap: when it was time to actually hold anyone accountable, he voted against establishing a bipartisan commission to investigate the violence and what led up to it — declining to join the 35 House Republicans who defied Trump and the leadership and voted for the commission. (The measure passed, but, of course, was killed by Senate Minority Leader Mitch McConnell in the Senate.)
And while Crenshaw proclaims that he wants to “cancel Cancel Culture” and complains about a “violent purge of all things… that don’t conform to the radical progressive religion,” he has no problem demanding Berry be canceled — kicked off the Olympic team — for exercising her constitutional right, including the right to reject American nationalism.
As for Scott Walker, he should probably learn the basic history of the country he claims to love. It’s far from the case that “everyone” used to stand for the anthem and the pledge of allegiance: civil liberties groups, on behalf of religious minorities and ideological objectors, have challenged the requirement to recite the Pledge of Allegiance and salute the flag (and often won) since the 1940s.
And note that while Berry is the locus of this week’s right-wing outrage, the Republican Party is also keeping busy ramping up its efforts to pass vote-suppressing legislation across the nation — using the dangerous lie that the 2020 election was stolen as cover.
Meanwhile, across state legislatures, conservative politicians are pushing laws that seek to limit the degree to which educators can discuss racism, sexism and other forms of discrimination and well-documented historical oppression. They are violating basic principles of free speech.

The hypocrisy grates. But it also reveals a profound left-right divide in how so many Americans think about loving our country. For liberals like myself, part of our patriotic duty is the campsite rule: Leave a place better than you found it. The America I am most proud of is the America that strives to be better; the Americans I most admire are those who fought to make it better, often in the face of conservative rage and often under the heavy hand of unjust laws.

I believe that the American constitution wisely protects free speech and expression, and wisely prohibits the establishment of religion; that our founding document extends these liberties and protections to American citizens isn’t just a point of pride, but a crucial set of values that must be protected. It doesn’t matter whether I agree with Berry or not in her decision to turn away from the flag during the National Anthem.

What matters is that she’s protected in having the full freedom to do so. That’s American. That’s where I feel proudest of my country. Demanding she’s penalized for legal, constitutionally protected behavior is about as un-American and unpatriotic as it gets.

For many conservatives, love of country seems to be something shallower and more performative. It’s waving a flag. It’s reciting a pledge. It’s standing up for a song.

That stuff is easy — there’s no real work or sacrifice in blindly and reflexively proclaiming loyalty to your country. Protecting the very values enshrined in our constitution when it’s hard, though — that’s devotion. That’s the work of loving a country beyond performing patriotism. And that’s where so many Republicans are showing that their patriotism is less about a deep belief in American freedom than a desire to demand conformity, orthodoxy and line-toeing.

That’s not freedom at all.