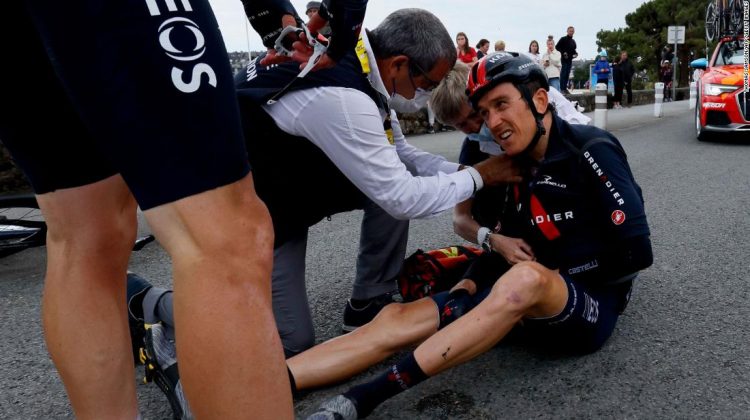 “Following a post-stage scan and x-ray we’re pleased to confirm @GeraintThomas86 has not suffered a fracture in his right shoulder,” tweeted the Welshman’s INEOS Grenadiers team. “He will be reassessed in the morning before stage four #TDF2021.”

The 2021 edition of the race has been marred by crashes and Monday was no different with Thomas, Primoz Roglic, Peter Sagan, Caleb Ewan and Arnaud Demareall hitting the tarmac before Tim Merlier won stage three, a 182.9-kilometer section between Lorient and Pontivy in Brittany.

Australian Ewan, who was taken to hospital, broke his clavicle and is now out of the Tour.

“It was a pretty complicated stage, a super nervous one,” Julian Alaphilippe, who is second in the overall rankings, told the Tour’s website.

“There have been quite a lot of damages. I’m happy to have reached the finish line in one piece. We’ll evaluate with the team what has happened to us today.

Tadej Pogacar, who won the 2020 edition of the race, used the word chaos to describe Monday’s race.

“I did stay on the bike, but it was not a good day,” Pogacar told the Tour website. “There were too many crashes again. It was a really hectic stage. To be honest, I don’t really know where anybody is … I only know that I am wearing the White jersey … and also that I lost time at the finish.”

Mathieu van der Poel is still in the yellow jersey as the Belgian rider kept hold of the overall lead.
“The final kilometres were super hectic, with a lot of crashes,” Van der Poel told the Tour website.

Following an incident on Saturday, French authorities have launched an investigation after a fan caused dozens of cyclists to crash during the Tour’s opening stage.

The disastrous fall was caused by a woman standing on the roadside. She stepped in front of the racing pack holding a cardboard sign, appearing to display a message for the television cameras.

According to the race’s video coverage, the sign hit German rider Tony Martin who was cycling near the head of the pack. Martin fell, which led to the subsequent crash of dozens of riders behind him.

Cyclists fell en masse and the crash left bikes and bodies tangled in the road. The fall held the race up for several minutes.