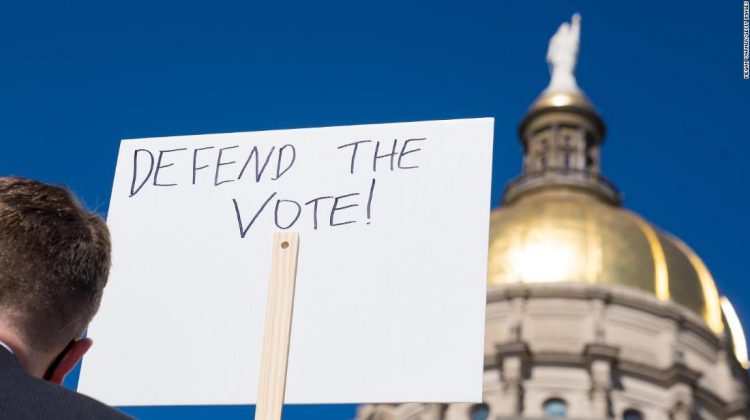 The lawsuit, coming days after Senate Republicans sunk their Democratic counterparts’ signature voting and election bill during a key test vote, represents an early example of the Biden administration attempting to use the levers of government to try to block restrictive state laws.

Though President Joe Biden has underscored independence between the Oval Office and the Justice Department, he has nonetheless indicated that voting rights is a major agenda item for his entire administration. Biden narrowly won the state of Georgia during the 2020 presidential election, the first Democratic presidential nominee to pull it off since 1992.

“This lawsuit filed is the first of many steps we are taking to ensure that all eligible voters can cast a vote that all lawful votes are counted and that every voter has access to accurate information,” Attorney General Merrick Garland said at a news conference Friday.

“These legislative actions occurred at a time when the Black population in Georgia continues to steadily increase and after a historic election that saw record voter turnout across the state, particularly for absentee voting, which Black voters are now more likely to use than White voters,” Clarke said during the news conference. “Our complaint challenges several provisions of SB 202 on the grounds that they were adopted with the intent to deny or a bridge, Black citizens, equal access to the political process.”

Republican Gov. Brian Kemp issued a defiant statement in response to the department’s announcement, calling the lawsuit “born out of the lies and misinformation the Biden administration has pushed against Georgia’s Election Integrity Act from the start.”

Kemp accused the administration of “weaponizing the US Department of Justice to carry out their far-left agenda that undermines election integrity and empowers federal government overreach in our democracy.”

Secretary of State Brad Raffensperger said it’s “no surprise that (the DOJ) would operationalize their lies with the full force of the federal government. I look forward to meeting them, and beating them, in court.”

Following the Georgia law’s passage, Biden called on Congress to pass voting rights legislation that would counter measures like it.

The President at the time called the Georgia law “Jim Crow in the 21st Century” and “an atrocity.”

The Justice Department is suing Georgia under Section 2 of the Voting Rights Act. It forbids voting qualifications that “result” in the “denial or abridgment” of the right to vote “on account of race.”

Challenges under Section 2 can only be brought once the regulation at hand has gone into effect.

Garland’s efforts, however, could be impacted by a current Supreme Court case, Brnovich v. DNC, where the Republican National Committee and Arizona’s attorney general are defending two provisions of state law against a Section 2 challenge brought by the Democratic National Committee.

One regulation wholly rejects ballots for local, state and national races if they are cast in the wrong precinct and another says that only certain persons — like family members — may deliver another person’s completed ballot to the polling place.

A federal appeals court invalidated both under Section 2, stressing the state’s “long history of race-based discrimination against its American Indian, Hispanic and African American citizens.”

Now the DNC is fearful that the Supreme Court will limit the reach of Section 2 and allow the provisions to remain in effect.

More action from DOJ to come, including on audits

Also Friday, the Justice Department announced a task force to address the rise in threats against election officials. Jurisdictions across the country, especially with high-stake local elections like in Fulton County, Georgia, reported receiving threats and racist taunts.

Garland said that the Justice Department will decide to file more federal civil lawsuits against states that have passed restrictive voting laws.

“We’re looking at laws that were passed before, as well as the ones that have been recently passed, and as they are being passed, and we’ll make the same kind of judgment that we made with respect to this one,” Garland said.

“Some jurisdictions, based on disinformation, have utilized abnormal post-election audit methodologies that may put the integrity of the voting process at risk and undermine public confidence in our democracy,” the attorney general said.

Georgia became the first presidential battleground this year to pass new voting restrictions in the wake of Biden’s White House victory — setting off legal battles and prompting rebukes from major corporations in the state. Major League Baseball pulled the All-Star Game out of Georgia in protest.

Before the Justice Department’s action Friday, at least seven lawsuits already had been filed, challenging its provisions.

Shortly after it was passed in March, the law had already been challenged in court by a trio of voting rights groups: the New Georgia Project, the Black Voters Matter Fund and Rise Inc. The lawsuit said the new law “disproportionately impacts Black voters, and interacts with these vestiges of discrimination in Georgia to deny Black voters (an) equal opportunity to participate in the political process and/or elect a candidate of their choice.”

Opponents of Georgia’s law applauded the DOJ’s move, with NAACP President Derrick Johnson saying it “speaks to the level of urgency that is needed to protect our fragile democracy and ensure that all voices are heard.”

Voting rights activists have voiced particular alarm at parts of the law that give the Republican-controlled state government new powers over how elections are run in the state’s Democratic strongholds.

Under the law’s provisions, the Republican-controlled legislature now has the power to select three out of five members of the state elections board. And that board has new powers to replace local election officials it deems as poorly performing. The board now can take over election administration in up to four counties at a time.

Additionally, lawmakers removed the secretary of state as a voting member of the state elections board. Raffensperger, the current secretary of state, resisted Trump’s false claims of election fraud in 2020 and now faces a primary challenge from a strong ally of the former president, GOP Rep. Jody Hice.

This story has been updated with additional reaction and background information.