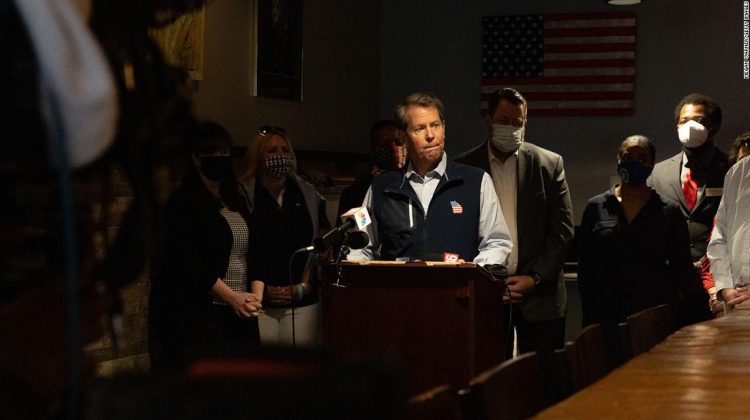 Sources close to Kemp described the DOJ’s actions as a positive development for the governor, who has spent months defending himself against Donald Trump and the former President’s push to overturn the 2020 election results. Now, Kemp has a more preferable opponent: the Biden administration.

“Gifts come in all sorts of packages these days,” one person close to Kemp told CNN of the DOJ’s lawsuit.

In March, Kemp enacted the law, which includes new voter identification requirements for absentee ballots, empowers state officials to take over local elections boards and limits the use of ballot drop boxes. At the time, the first-term Republican was facing pressure from the right to tighten up the state’s voting laws after Georgia went blue in the 2020 presidential race and the Senate runoffs.

The bill — dubbed the “Election Integrity Act” and pushed amid a Republican-led effort to change voting laws nationwide — was viewed as an attempt to quell a conservative revolt against the governor. It quickly became a rallying cry for voting rights advocates. Led by Kemp’s 2018 opponent, Democrat Stacey Abrams, activists had launched their own lawsuit over the law. The law prompted backlash from corporations and even saw Major League Baseball relocate this summer’s All-Star Game from Atlanta to Denver in protest.

But Kemp and allies in conservative media pushed back on the liberal reaction, accusing corporate America and the MLB of going “woke” and bringing to light more restrictive voting laws in progressive states — a move that Republicans in Georgia tell CNN helped rally the GOP troops around Kemp.

Nevertheless, Republicans in the state remained wary of Trump, who continued to focus his ire on Kemp, deriding him as a “RINO” and threatening to back a primary challenger to him in 2022. While Trump’s team has struggled to find someone to take Kemp on, Republican operatives have expressed concern over how the former President’s rhetoric would affect Kemp’s reelection bid, bracing themselves for a potential visit by the former President to the state in coming months.

The Biden DOJ’s move, however, gives Kemp a clear Democratic target where he can aim his rhetorical fire. Some Georgia Republicans told CNN this will make it harder for the former President to lash out at a conservative governor directly taking on the Biden administration over the key issue of “election integrity.”

“This guy (Kemp) should go buy a lottery ticket,” said one Georgia GOP strategist. “Between this and the All-Star Game debacle, his stock with GOP primary voters is skyrocketing like a damn Reddit meme stock.”

Even Democrats in the state say Kemp benefits from the lawsuit.

“Pretty good for Kemp,” said one Democratic strategist in Atlanta. “It is a badge of honor that he will take to the nomination.”

The governor already appears to be making the most of the opportunity. In a defiant statement Friday, Kemp said the lawsuit was “born out of the lies and misinformation the Biden administration has pushed against Georgia’s Election Integrity Act from the start.”

Kemp accused the administration of “weaponizing the U.S. Department of Justice to carry out their far-left agenda that undermines election integrity and empowers federal government overreach in our democracy.”

The Republican closed by noting that, while serving as Georgia’s secretary of state, he had won two previous election-related cases against the Obama administration’s DOJ

“I look forward to going three for three to ensure it’s easy to vote and hard to cheat in Georgia,” Kemp said.

Trump’s response to the news, meanwhile, is muddled. The former President issued a statement Friday afternoon that tried to criticize both the Biden administration lawsuit and Georgia Republican officials like Kemp.

“The PEOPLE of Georgia should SUE the State, and their elected officials, for running a CORRUPT AND RIGGED 2020 PRESIDENTIAL ELECTION—and for trying to suppress the VOTE of the AMERICAN PEOPLE in Georgia,” read Trump’s statement in part.

Some in Trump’s orbit worry about the optics of his crusade against Kemp, who is viewed as one of the most conservative governors in the country and was widely praised by Republicans for his early reopening of the state amid the coronavirus pandemic. And notably, most of the other figures and organizations loosely associated with Trump’s political operation have tended not to share his animosity toward Kemp.

For instance, a nonprofit advocacy organization called the Election Integrity Alliance issued a clearer statement on Friday in support of Georgia’s law and against the Biden administration’s “unconstitutional power grab.”

“Every American should be outraged that the Democrats continue to try to thwart election integrity,” read the statement, in part, from the Alliance, which is associated with the American Greatness Fund, a nonprofit founded by former Trump campaign manager Brad Parscale.