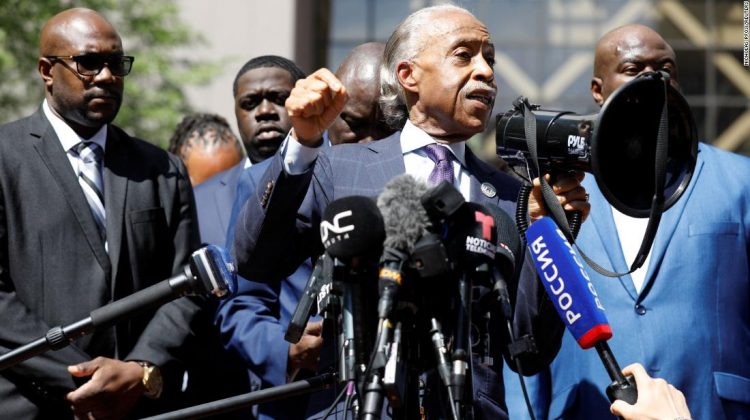 “However, we have a long way to go and many changes to make before Black and Brown people finally feel like they are being treated fairly and humanely by law enforcement in this country,” she said in a statement.

“This verdict and the sentencing is the longest sentence we’ve seen, but it is not justice,” the Rev. Al Sharpton told reporters moments after Chauvin, a former Minneapolis officer, was sentenced.

“We got more than we thought only because we have been disappointed so many times before,” Sharpton said.

Surrounded by Floyd’s relatives, attorneys representing the family described Chauvin’s sentence as historic and the longest for a police officer in Minnesota.

But one of the, Ben Crump, said that a sentence for a law enforcement officer “should not be the exception but the norm.”

“Real justice in America will be Black men and Black women, and people of color will not have the fear being killed by the police, just because the color of their skin,” Crump said.

Minnesota Attorney General Keith Ellison applauded the sentence and hoped that it will be a turning point for the criminal justice system in the United States.

“The outcome of this case is critically important, but by itself, it’s not enough. My hope for our country is that this moment gives us pause and allows us to rededicate ourselves to the real societal change, change that will move us much further along the road to justice,” the state attorney general said.

Ellison added that he hopes Chauvin takes time to reflect upon Floyd’s life and the “movement that rose up to call for justice.”

President Joe Biden said Chauvin’s sentence “seems to be appropriate” after being informed of the decision by reporters.

“I don’t know all the circumstances that were considered, but it seems to me, under the guidelines, that seems to be appropriate,” Biden said in the Oval Office on Friday afternoon.

However, he also said he hadn’t heard anything about the sentence until journalists relayed it when they entered the room.

Crump said Floyd’s family was grateful for the support from people around the country.

The legislation includes provisions to set up a national registry of police misconduct, a ban on racial and religious profiling by law enforcement and overhaul qualified immunity.

In a statement released after the sentencing hearing, Floyd’s family and attorneys urged the Senate to pass the legislation “without further delay.”

“We need this sentence to usher in a new era of accountability that transforms how Black people are treated by police. To achieve that — real, lasting change in police departments from coast to coast — we need the U.S. Senate to pass the George Floyd Justice in Policing Act without further delay,” they said in a statement.