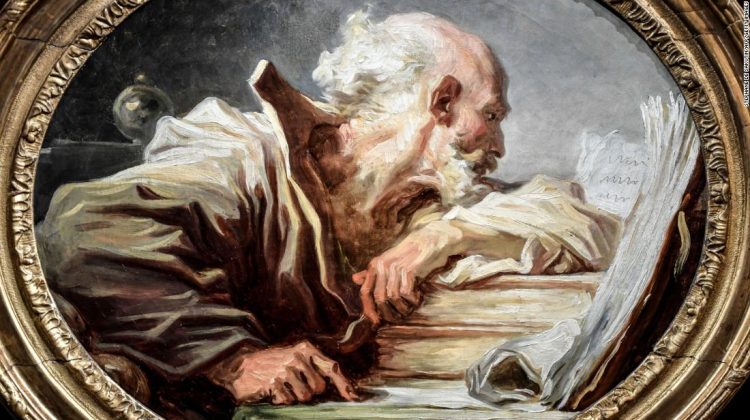 A “forgotten” painting kept in the same family for generations has sold for 7.68 million euros ($9.1 million) at auction after experts discovered it was the work of French painter Jean-Honoré Fragonard.

“A philosopher reading” by Fragonard was spotted by Antoine Petit, an auctioneer at the Enchères Champagne auction house in Épernay, north-east France, when he was called to assess an inheritance at an apartment near the town, he told CNN Tuesday.

“I thought it was beautiful,” he said.

After taking the painting down to examine it more closely, he found the word “Fragonard” written on the back in black ink, added Petit.

The owners, who’d had the painting in the family for generations without it being included in any will, gave it to Petit, who took it to be assessed by Cabinet Turquin, a Paris-based company of painting experts.

“I couldn’t be absolutely sure myself,” said Petit, adding that the team at Cabinet Turquin confirmed that it was an authentic Fragonard.

“Despite the buildup of dust and the yellow varnish on the canvas, the power of his painting remains easily recognizable,” said Stephane Pinta, from Cabinet Tuequin, in an auction catalog produced by the company.

According to the catalog, “the painting was passed down from generation to generation but over the course of time the attribution was forgotten.”

Fragonard lived from 1732-1806 and is considered one of the most emblematic painters of the 18th century.

The oval-shaped, oil-on-canvas painting shows a white-haired man leaning over a book. Petit told CNN that this particular painting dates from 1768-70.

During this period Fragonard had finished his apprenticeships and was painting whatever he felt like, rather than producing work to order for clients, Petit said.

Around the same time, Fragonard also produced a series of imaginary portraits, and “this is likely one of the earliest examples,” according to the auction catalog.

The painting has been in the same family for more than 200 years and appears to have been rarely handled or moved, said Cabinet Turquin, which added that it “is in a remarkable state of preservation.”

The owners had no idea of its value, said Petit, but enthusiastic bidders pushed the final sale price far beyond the estimate of 1.5 – 2 million euros ($1.8 – 2.4 million).

Ten years ago the painting wouldn’t have sold for anywhere near as much, but today these kinds of works are much more in fashion, said Petit. “The planets aligned, if you like,” he added.

The dingy, oil-on-wood panel of nude mythological figures didn’t look very valuable to Robert Warren, executive director of the Hoyt Sherman Place art complex in Des Moines, but it turned out the painting was likely worth millions of dollars.