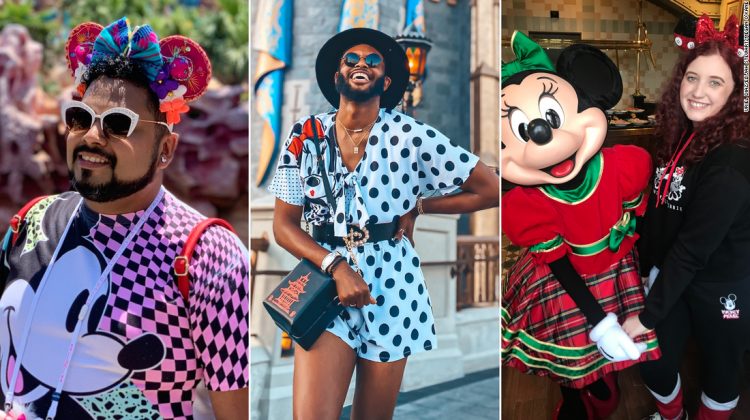 (CNN) — Disney World’s Magic Kingdom bills itself as “the most magical place on Earth,” which is only true if you buy in completely. There, the pretzels are shaped like Mickey Mouse, the air on “Main Street USA” circulates the scent of fresh-baked cookies and Cinderella herself might blow you a kiss from a parade float.
Reality has no bearing at a Disney theme park — which is part of the parks’ appeal to many LGBTQ fans. A trip to a Disney park promises an escape from life as you knew it, permission to experience unfettered, childlike wonder and pose for photos with both Mary Poppins and Sadness, the perpetual downer from “Inside Out.”

Many queer and trans Disney fans are aware of the spell they’re under, which typically fizzles out somewhere in the parks’ prodigious parking lots or on the drive back. But they buy in anyway, because at the parks, they feel at home.

“The feeling of escaping reality and the harsh impact of society seems to just disappear once you walk into the park gates,” said Franky Dalog, a transmasculine park employee.

Franky Dalog, pictured in front of Cinderella’s castle and in an outfit inspired by “Raya and the Last Dragon,” works for Disney.

Disney’s brand of manufactured Americana feels real to the queer and trans people who’ve dedicated their personal and professional lives to the brand. The parks have convinced them that magic exists within its walls — that there’s a toothless, candy-coated world where no one questions whether they belong.

Disney parks take them back to childhood

For many LGBTQ Disney fans, coughing up the cash for a Disney park ticket is worth the nostalgia trip. Disneyland, Disney World and their international sister parks capitalize on guests’ childhoods, which, for adults of all ages, are likely tied to the popular Disney films they grew up with.

“Growing up and watching ‘Snow White’ or watching ‘Cinderella’ as a queer little boy, just having this fantasy of Disney … it always felt like love,” said Joél Morales, director of operations at the LGBTQ+ Center in Orlando.

Morales said Orlando’s proximity to Disney World’s four parks is partially what drove him to move to the area, which is one of the most vibrant and populous LGBTQ communities in the country.

Disney was America to a young Uriel Diaz, whose parents emigrated from Mexico and raised him in Texas. Though his parents couldn’t afford to take their four children to Orlando to visit the parks in person, the films were the soundtrack to his life.

Uriel Diaz, pictured in front of Ariel’s grotto, went to Disney World for the first time when he was 30.

“To them, giving their kids ‘the best’ was the American dream, and in their eyes, that was Disney,” he said of his parents. “They filled my entire childhood with magic.”

He finally made the trip to Magic Kingdom when he was 30, when the park was decorated for Christmas. The magic was “amped up to 1,000,” Diaz said. It was just as perfect as he’d always imagined.

But queer fans who spoke to CNN said they see phases of their own stories reflected in protagonists who often begin their hero’s journeys as outsiders.

“I think it’s something a lot of gay people connect with, to be honest, even though there was zero representation in the movies themselves,” said Gregory Gaige, a Disney blogger from the UK. “It’s the whole sense of getting a ‘happily ever after’ in the end that we all yearn for.”

Gaige saw parallels to homophobia and coming out in “The Little Mermaid,” in which Ariel is told she can’t be the version of herself she dreams of being, so she must leave her underwater home to transform. He loves Hercules and Belle of “Beauty and the Beast” for the same reason — their greatness, what makes them special, is unappreciated and unnoticed by those around them until they find the place where they belong. Hercules sings quite plainly about it in the song “Go the Distance.”

Elsa, the snow queen of “Frozen,” is widely speculated to be a queer-coded Disney hero (though she is portrayed as violent and unstable at times). She’s made to suppress her unique powers from the rest of the world, which inhibits her ability to connect with people — a subtext that culture scholar Angel Daniel Matos quickly identified as one of the queerest stories in Disney’s canon in a 2014 essay.

“After Elsa discovers and unleashes her ‘queer’ identity, she is able to collapse the binaries that have regulated and haunted her life,” wrote Matos, an associate professor of gender, sexuality, and women’s studies at Bowdoin College.

“Conceal, don’t feel, don’t let them know,” Elsa sings in the inescapable anthem, “Let it Go.” She ends the song by literally letting her hair down and testing out her powers for the first time. She’s liberated.

“I don’t have to explain to anyone why my favorite Disney princess is Queen Elsa,” Dalog said.

Long before Disney made conscious efforts for wider inclusion, queer fans of one Mickey Mouse had already established their own communities within the fandom. Gay Days, a weeklong vacation that encourages same-sex couples and their families to spend some time at the parks and in Orlando’s gay scene, came about in 1991.

The event was controversial when it began to boom in popularity. But today, the “controversy… has disappeared,” according to the history section of its website.

“The protesters and the warning signs at the Magic Kingdom entrance have been replaced by smiling cast members,” the site says.

Many LGBTQ fans have made careers out of their Disney fandom and their experiences at the parks as queer people.

Diaz is known for “bounding” — that’s the term among Disney devotees for stylishly and subtly dressing up as a favorite Disney character to circumvent the park’s restrictions against adult costumes. He’s recently posted photos as Cruella, mimicking her two-toned hair (which he extended to his beard and brows), and Cinderella’s Fairy Godmother, designed to inspire his fellow queer Disney bounders.

Megan O’Kane has been a Disney fan all her life. She regularly visits Disneyland Paris with her girlfriend.

Megan O’Kane, based in Northern Ireland, runs a successful Disney blog and Instagram account, where she documents her travels to Disneyland Paris with her girlfriend. She said her love for Disney has “completely changed [her] life.”

“We have never felt anything but welcome, safe and comfortable in the parks,” O’Kane told CNN.

The fans told CNN they think Disney is improving its inclusion of LGBTQ fans and employees. In recent years, the Paris theme park has hosted Pride parties throughout June. The company, when reached by CNN for comment, pointed to recent changes to its employee dress code and new Pride-themed products as examples of newer inclusive measures. In April, Disney expanded its strict employee dress code to include “gender-inclusive hairstyles, jewelry, nail styles and costume choices,” even going so far as to approve “appropriate visible tattoos.”

Even material tokens of inclusion, like pins designed with the colors of the transgender or bisexual flags and the rest of this year’ Rainbow Collection, can feel meaningful to fans, said Dalog.

He said he feels “safe and supported” at the parks because he knows how many of his fellow cast members are LGBTQ, too. He noted that while the company doesn’t go “out of [its] way” to include trans folks, he feels tiny bursts of joy when he sees a cast member use their preferred name on their nametag.

Sometimes the fantasy falters. Dalog said he’s seen guests harass LGBTQ visitors, which requires cast member intervention. But guests will always have an employee who’s been on the receiving end of harassment, too, and will stand up for them if needed, he said.

To some LGBTQ fans, the magic never fades

Disney parks don’t always live up to the fantasies they promised young queer people like Morales.

“It’s a whole other thing when you’re in there — the reality of it,” he said.

Despite greater efforts to be inclusive in recent years, Walt Disney Company, which seems to have fingers in every pot in media and beyond, has in the past been far from an exemplary ally to its many queer and trans employees and guests. Holding fast to its family-friendly image was a priority for much of its history and, during some points, it “took a high-profile stand against open homosexuality in its parks,” like banning same-sex dancing, according to an Orlando Weekly oral history of Disney and Gay Days.

Disney fans told CNN they were pleased with Disney’s progress since those days, but they also said that the company should do more to make all LGBTQ fans feel supported in their parks. All of them opined that they want to see an LGBTQ protagonist in a major Disney film, and many of the fans told CNN they want to see a queer person of color onscreen. But, ultimately, their love for Disney lies not in its representation or its capitalistic efforts at inclusion — it’s just the euphoria they feel when they’re in the alternate world of the theme parks.

Elijah Stewart fulfilled his dream of making Disney magic as a performer and salesperson at Magic Kingdom.

Elijah Stewart works as a Magic Kingdom cast member, singing and working at a storefront. The crown jewel of Disney’s Florida parks was the first place where he felt overcome with joy and wonder. He “grew up rough,” he said, and waltzing down the street holding Snow White’s hand as a child was freeing.

“Making people happy and making magic for others is something I love to do,” he told CNN. “Now look at me, performing and selling merchandise at the most magical place on Earth!”

The glamor of Disney is imperfect in that it often requires work to maintain. But for the queer folks who loved Disney World before it loved them back, that magic is real — and it’s that magic that’s shaped their lives.