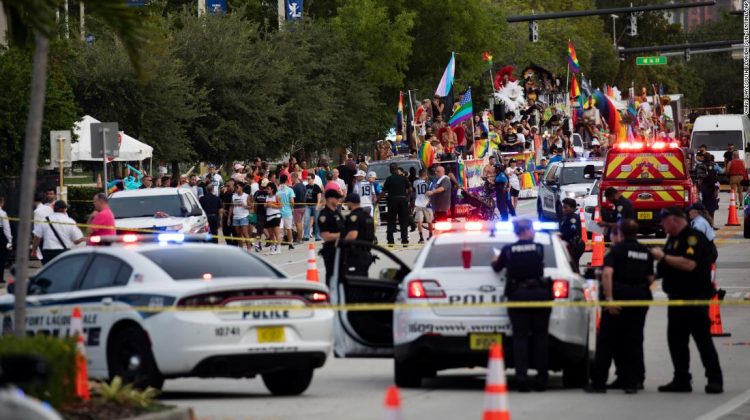 “Both males were taken to Broward Health Medical Center, where one was pronounced deceased,” said Fort Lauderdale Police Department detective Ali Adamson at a Saturday night press conference. The second victim is expected to survive.

Adamson said the FBI is assisting with the investigation but declined to say whether investigators believed the incident was intentional.

“We are evaluating all possibilities,” said Adamson. “Nothing is out of the question.”

Video from CNN affiliate WPLG showed a man being taken into police custody shortly after the incident, but Adamson would not say whether he was suspected of a crime. “We are speaking with the driver involved,” she said.
Chris Caputo, city commissioner for Wilton Manors, the location of the parade, tweeted, “It seems increasingly probable it was an accident.”

Broward County Sheriff Gregory Tony said, “This tragedy took place within feet of me and my BSO team, and we are devastated having witnessed this horrific incident. I’m proud of all the BSO and local first responders who leaped into action, running into the unknown and instantly provided care for the victims.”

The Stonewall Pride Parade had just begun when the incident happened. The remainder of the parade was canceled, according to the Wilton Manors Police Department.

Wilton Manors is a Fort Lauderdale suburb that bills itself as having a “strong gay presence,” according to the city’s website, embracing its “reputation as a destination for the gay, lesbian, bisexual and transgender community.”

The pedestrians were hit near a vehicle in which Rep. Debbie Wasserman Schultz was riding. She tweeted Saturday night, “I am deeply shaken and devastated that a life was lost.”