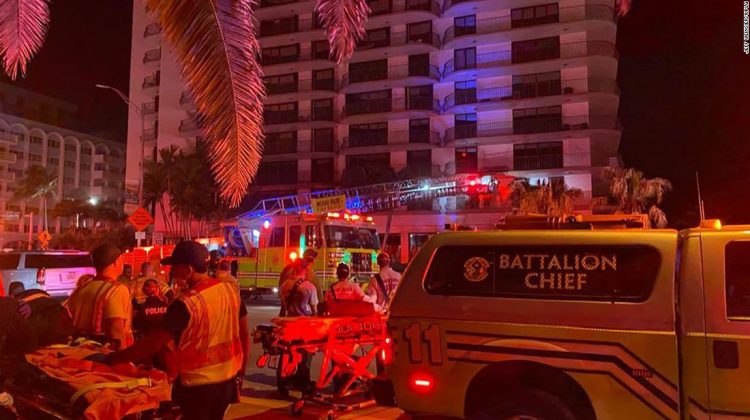 When part of the 12-story Champlain Towers South condo building in Surfside, Florida, collapsed early Thursday, it left a pile of rubble where the beachside residences once stood.

As of Thursday evening, one person was confirmed to have been killed and 99 people were unaccounted for, Miami-Dade County Mayor Daniella Levine Cava said.

Search and rescue teams and firefighters planned to work around-the-clock for the next few days to try to find more survivors.

Here is what some witnesses say they saw and heard after the building’s collapse.

A former vice mayor of Surfside

Barry Cohen said he was deep asleep when a bang that he thought was a lightning storm woke him up around 1:30 a.m. Thursday.

“I realized that it didn’t stop. It just kept on going for 30 seconds,” Cohen told CNN affiliate WPLG.

When Cohen got up and opened the door to his apartment, where he’s lived for two years, “there was huge pile of rubble and dust, just havoc is all that I could think of.”

So Cohen and his wife made their way downstairs, but couldn’t get the door to the outside to open because some steel had bent in the door, he said.

They went to the basement and the parking garage, but there was dust everywhere and water was “pouring out of pipes in the ceiling.” Water was already up to his shins, he said.

The couple went back to their apartment and yelled for help from their balcony, according to Cohen.

“I was yelling to the Surfside Police to identify myself because I was a former vice mayor of Surfside,” Cohen said. “I was yelling and screaming to the fire department to get the hook and ladder truck up to us so we could get out of there.”

A few of their neighbors joined them on the balcony.

“I thought the building was unstable,” Cohen said. “I was worried it was going to completely go down.”

A boy is rescued from the rubble

Nicholas Balboa said he was walking his dog nearby when the disaster happened.

Thinking it was impossible for anyone to have survived, Balboa said he made his way to the back of the building, where he hear the voice of a boy coming from the debris.

“A little boy, couldn’t have been more than in his preteens,” Balboa told CNN’s Victor Blackwell.

“Then I saw an arm sticking out of the wreckage, and he was screaming, you know, ‘Can you see me?'”

Balboa said he and another person tried to free the boy, but the rubble was too heavy.

Balboa was able to signal to a police officer using the flashlight on his phone. Rescuers arrived and pulled the boy out.