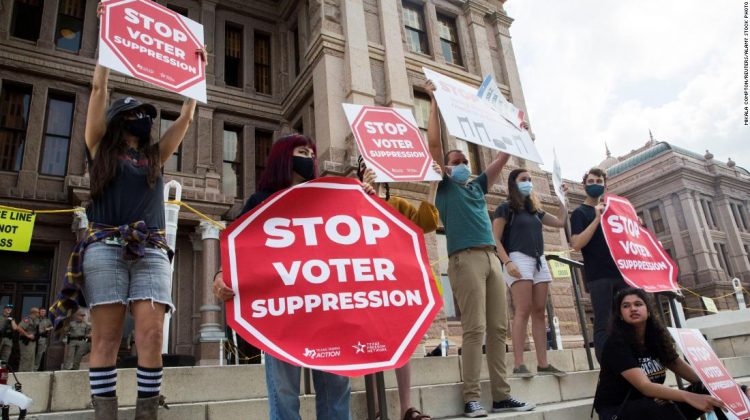 Democratic activists are redoubling their efforts to register voters, educating them about new regulations so they understand the new rules about requesting ballots, and have time to check their registration and acquire acceptable forms of ID — as some GOP-led legislatures push those measures under the guise of making elections more secure.

Nick Rathod, former special assistant and deputy director of intergovernmental affairs for President Barack Obama, said that the Democratic Party and its donors need to start an aggressive voter education effort now to explain new requirements for casting a ballot, especially in redder states that have made it harder to do so, and not wait until just before elections when most people start to think about voting.

“In places like Florida and others that that’s happening, I think that should be expanded and continue,” said Rathod, who called on the party’s top leaders to get involved.

The effort to galvanize Democratic voters around the issue will reach fever pitch next week when Senate Majority Leader Chuck Schumer plans to hold a key test vote on legislation that would safeguard voting rights.

Democrats have been working all week to address West Virginia Sen. Joe Manchin’s concerns about the party’s sweeping elections overhaul bill, known as the For the People Act, as CNN’s Alex Rogers and Manu Raju have reported. Democrats want to ensure that all 50 of their senators present a unified front on the voting rights legislation next week, even though they have no chance of winning the 60 votes needed to break a filibuster. Republicans argue that the Constitution gives states, and not the federal government the responsibility to conduct their own elections. But the party also has little incentive to back legislation that they think would advantage Democrats in many states.
Democrats’ quest to weaponize voting rights in next year’s midterm elections would be complicated by a Manchin defection on the bill that comes up next week, allowing Republicans to argue there was bipartisan opposition to the legislation. Manchin has long said he hoped to sway GOP members to support a compromise proposal and he circulated a list of his ideas earlier in the week, but GOP leaders quickly squelched the notion that they could find bipartisan consensus. After Georgia voting rights advocate Stacey Abrams signaled support for the West Virginia senator’s compromise proposals, Senate Republicans quickly pounced on Abrams’ openness to it as an excuse not to support it.

Given that Democrats’ razor-thin Senate majority gives them limited options in Congress, some local groups are redoubling their efforts to register voters and educate them about how to clear the hurdles that state-level Republicans are setting up for the next election cycle.

In Florida, the mainly Black-led nonpartisan Equal Ground Education Fund is marking Juneteenth by targeting voters affected by new state laws in four counties. The group is concerned about new requirements for getting a mail-in ballot, among other issues. Floridians must now produce a driver’s license, state ID or the last four numbers of their Social Security numbers to get a mail-in ballot. For in-person voting at polling places, Florida voters don’t need state ID and can use a debit card or a library card, for instance, to establish their identity.

Studies have shown that Black and Hispanic voters are more likely to have difficulty producing official ID than White voters. In Florida previously, people needed to register for a mail-in ballot every two election cycles, but now they must do it every election — a step that Democrats fear could cast out some of their voters in the midterms.

Jasmine Burney-Clark, Equal Ground’s consulting director, hopes that robust education efforts can help motivate Floridians to defy those new barriers to casting a ballot in the new state law, which also restricts the provision of water to voters in traditionally long lines often seen in minority areas. The law was signed by Republican Gov. Ron DeSantis, a close ally of former President Donald Trump and a possible White House contender in 2024.

“Our hope is that (the new law) won’t deter people from participating but it will increase their energy around the elections and motivate them to continue voting by any means necessary, because truly elections do have consequences,” Burney-Clark said. The group hopes to reach at least 1,000 voters this weekend at the start of a widening campaign running up to the midterms.

Florida is just one of many Republican-led states that has moved quickly, using a foundation of Trump’s lies about election fraud to pass new laws to restrict access to both mail-in and in-person voting — many of which disproportionately affect voters in cities and areas where minority voters live.

Between the 2020 election and the middle of May, at least 14 states enacted 22 new laws that restrict access to the vote, according to the Brennan Center for Justice at the New York University School of Law. At least 61 bills with restrictive measures were moving through 18 state legislatures as of mid-May.

Biden has repeatedly called such state laws “un-American,” and while Harris has added the effort to protect voting rights to her portfolio, some Democrats want to see more engagement from Washington on combating Republican restrictions.

“The President, the vice president should be using their bully pulpit to shine a light on what’s going on in these places and help motivate and galvanize people in states around the country to organize themselves to better understand and educate themselves on what’s going on,” said Rathod, the former special assistant and deputy director of intergovernmental affairs for Obama.

Some Democratic activists believe that the Biden administration’s Justice Department should have done more to prevent Republican maneuvering in Arizona that led to a partisan-driven audit of ballots.

“There are many things that are open to debate in America. But the right of all eligible citizens to vote is not one of them,” Garland said in a speech in the Great Hall of the Justice Department, laying out a 30-day plan to double the number of employees in the Civil Rights Divisions voting enforcement unit.

The frustration with Congress remains.

“I feel like our national representatives are not operating as aggressively as the state legislatures are,” Burney-Clark said. “The think tanks that are establishing the legislation and handing it over to these legislators — they’re moving quickly, they’re going state by state. They’re strategic about how they’re operating.”

The lack of action from Congress has led others to step in. A flurry of lawsuits has been filed in Georgia, for instance, against a slate of new measures restricting voting that were rushed through soon after Democrats won narrow control of the US Senate in two runoff elections in January. A national campaign featuring prominent Black executives targeted Atlanta-based corporate giants like Coca-Cola and Delta Airlines. Both firms reversed course after trying to stay out of the controversy and issued statements criticizing Republican-passed voting laws.

In Texas, Democratic lawmakers walked off the state House floor to temporarily block a restrictive voting bill before an end-of-session deadline last month, depriving the Republican majority of the quorum they needed to pass the bill. (Texas Gov. Greg Abbott has promised to bring back the legislation during a planned special session).

Seeking national Democratic support, some of the state lawmakers traveled to Washington this week, hoping to build pressure for a federal response.

During a meeting with more than a dozen of the Texas lawmakers Wednesday, Harris described her view of what is at stake — though she has not yet defined exactly what her role will be on the issue: “We know we have a great challenge in front of us, and therefore a fight, which is the fight for every Americans’ right, meaningful right, to vote,” she said.

Senior administration officials have said Harris will try to create coalitions of Americans concerned about the right to vote and help publicize the harm that will ensue if state legislatures succeed in passing more restrictive voting laws. On Friday, Harris met behind closed doors with four voting rights advocates in Atlanta and was joined by Georgia’s Democratic Sens. Raphael Warnock and Jon Ossoff.

Beto O’Rourke, a former congressman from Texas and Democratic presidential candidate who has advocated for expanding voting rights, told CNN Friday that he and other activists are organizing a “massive rally” Sunday night at the Texas Capitol, and he echoed Abrams’ urging of Americans nationally to call their senators and demand action.

“That’s the kind of pressure that will help to move something,” O’Rourke said. “It’s not enough to have a show or symbolic vote.”