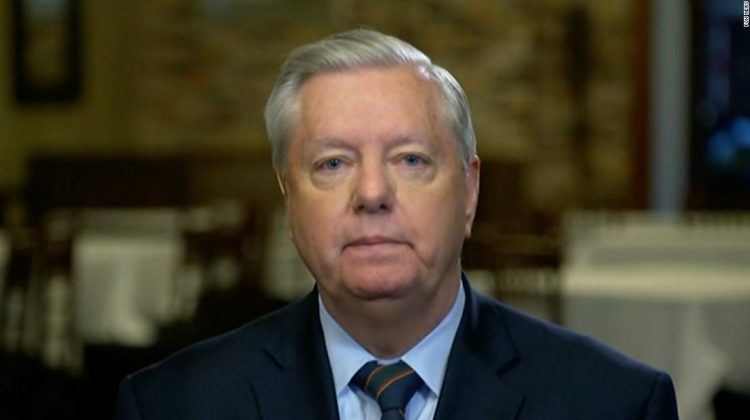 Graham said that the bill — which is, at present, highly unlikely to get the 60 Senate votes required under current rules to overcome a filibuster — would “change America forever.”

“There’s a provision in (the bill) that would take away from states the ability to draw congressional lines, and give it to an independent commission created in Washington,” Graham said Friday at The Faith & Freedom Coalition’s Road to Majority Conference in Florida. “That means that when people move to South Carolina, Florida and Texas, and we get new congressmen and women because people are moving and the population shifts, that Republican state houses can’t draw those lines, but some Democratic-appointed commission. That would be the end of redistricting as we know it.”

Graham was right that the Democratic bill would end redistricting as we know it today — but he was wrong, in two ways, about what the bill would actually do.

Facts First: The Democratic bill would require states to create their own independent commissions to draw district boundaries, but those commissions would not be created in Washington, located in Washington or run from Washington. It’s also false to claim that the commissions would be “Democratic-appointed.” Rather, each state government — aside from a small number of states the bill would allow to keep their current redistricting systems — would be required to select or create a nonpartisan state agency to come up with a short list of applicants for their new 15-member commission. Then the 15 members of the commission — five Republican members, five Democratic members, and five members unaffiliated with either party — would be chosen through a combination of random selection and cross-partisan consensus.

Two experts on redistricting — Northwestern University law professor Michael Kang and Stanford University law professor Nate Persily — both told CNN that Graham’s claims were incorrect. The bill, Kang said in an email, “would require congressional redistricting by independent commission, but independent commissions to be established under state law by the states themselves, not ‘created in Washington.’ The commissions would not be ‘Democratic-appointed,’ but instead members would be selected through a nonpartisan process, with membership composed of equal numbers of Democrats, Republicans, and independents.”

If you’re being very generous to Graham, you could argue that when he said that the bill would give redistricting power to an independent commission “created in Washington,” he meant that it was legislation passed in Washington that required each state to create a commission. But Graham’s wording would be highly misleading at best even in this reading — fostering the inaccurate impression that the commissions would be federal entities rather than entities created by the states themselves.

The inaccuracy of Graham’s comments was previously noted by Washington Post reporter Dave Weigel. Graham’s staff did not respond to CNN’s requests for comment.

What the bill says

And the bill would take boundary-drawing power out of the hands of state politicians and give it to independent commissions made up of state residents.

Most states, though, would have to create new commissions.

How the commissions would be chosen

In the states required to create new commissions, each commission would have to include 15 members — five Republican members, five Democratic members, and five people not affiliated with either of the two major parties.

The process of selecting the 15 members of each commission would start with a “nonpartisan agency” in the legislative branch of the state government. The nonpartisan agency could be either a newly created entity or an existing state agency that is already required to maintain impartiality and to provide services on a nonpartisan basis.

The nonpartisan state agency would interview applicants and whittle down the pool of applicants to a short list of 36 people — 12 Republicans, 12 Democrats, 12 unaffiliated — while taking into account geographic, racial, ethnic, economic and gender representation.

Assuming the committee of legislators did approve one of the agency’s short lists, the 15 members of the independent redistricting commission would then be chosen through a two-part process.

First: Six of the 15 commission members — two Republicans, two Democrats, and two unaffiliated with either party — would be selected randomly from the approved short list.

Second: The other nine members — three Republicans, three Democrats, and three unaffiliated — would be chosen from the approved short list by the original group of six members. To be named to the commission, each of these nine additional appointees would have to be supported by at least four members of the original group of six, including at least one Republican, one Democrat and one unaffiliated member.

Who could serve on the commissions

Service on a state’s independent redistricting commission would be open to state residents aside from people who are involved in or connected to politics in various ways. Banned, among others, would be politicians, lobbyists, political operatives and staffers, people who have donated a total of more than $1,000 to candidates or political action committees over the previous 10 years, and immediate family members of people in the above groups.

In addition to their party registration and educational and employment history, residents who wanted to serve on a commission would have to disclose their race, gender, ethnicity; any “involvement” or “financial support of” any “professional, social, political, religious, or community organizations or causes”; and their most recent household income. (During a Senate Rules Committee meeting in May, Democrats endorsed a Republican amendment that would remove the “religious” disclosure requirement, so it’s highly possible this word would also be removed from a final bill.)

How the commissions would require cross-partisan cooperation

Once the commission’s membership was finalized, its actual work would also require cross-partisan cooperation.

The bill would prohibit the commission from taking “any” action — including finalizing the new district boundaries — unless the action was approved by a majority of commission members that included at least one Republican member, one Democratic member, and one unaffiliated member.

Graham could have noted that the bill does increase federal power over redistricting in a different way than he claimed. Before states could enact their final redistricting plans, they would have to submit the plans to the federal Department of Justice for a review in which the department would assess whether the plans complied with the Voting Rights Act of 1965.

But, again, that is not what Graham said.