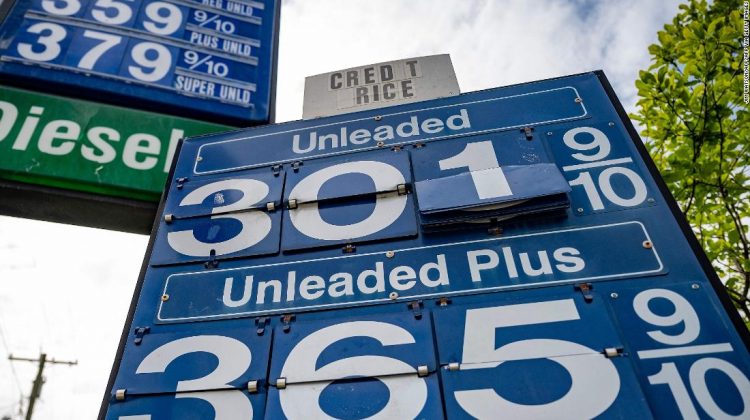 Republican Rep. Jim Jordan of Ohio blamed Biden for the rising prices in gas in a tweet Monday, noting that the average gas price increased by 86 cents per gallon from June 2020 to June 2021 and pointed at “President Biden’s economy!” to explain the difference in cost.
Similar arguments have been made by Republican Sen. Chuck Grassley of Iowa as well as right-wing groups on social media.

Facts First: It’s misleading to blame the President for high gas prices, especially since one of the biggest reasons behind the surge is that the US economy is starting back up — which is hardly bad news for a president who’s been in office for 5 months. Supply chains are complex and if any one thing could be singled out for the increase in gas prices it’s the pandemic, which caused the global production of oil — and many other goods — to decrease last year as demand cratered. Following the removal of pandemic-related restrictions, supply has not caught up with the new demand as the economy begins to recover and people get back on the road, experts told CNN.

The decrease in oil production followed a “sudden drop in petroleum demand” caused by the coronavirus pandemic, according to the EIA report.

The price of gas has risen significantly in 2021, going from an average of $2.42 per gallon in January to $3.076 in May. The price per gallon remained at levels above $3 for nearly 4 years in the wake of the great recession from December 2010 to November 2014.

“At this point, there is no plausible connection between Biden becoming president and the increasing gasoline prices,” Severin Borenstein, a professor of Business Administration and Public Policy at the University of California Berkeley said.

Patrick De Haan, head of petroleum analysis at GasBuddy, a website that tracks the price of gas, also suggested the rising gas prices are due to a recent increase in demand following the decrease caused by the pandemic, not any policy changes by the President.

“This is not a political issue. It’s more of a Covid-19 challenge simply because of how Covid-19 decimated fuel demand last year,” De Haan told CNN. “While prices are much higher this year than last year, it’s because of the recovery, the economic recovery. More Americans are getting out, gasoline demand has soared from a year ago.”

The White House has also pushed back on Jordan’s accusations, with White House press secretary Jen Psaki tweeting that “gas prices are the same now as they were in June 2018.”

According to De Haan, while that’s not entirely accurate, the difference is not large.

“June 2018 you could find the national average at 2.96 a gallon, which is merely 11 cents lower than where we find ourselves today,” De Haan told CNN.

“Jim Jordan’s tweet, I would qualify, is lacking context and certainly in my opinion incorrectly assigns blame on Biden’s economy,” DeHaan said. “Prices had President Trump been in office would have, absolutely guaranteed, surged as well.”

Gas prices aren’t something presidents typically have much direct sway over. As the EIA notes, the price of gas is determined by four major factors: taxes, the cost of marketing and distribution, refining, and the cost of crude oil. Biden’s enacted policies have not currently had a significant effect on any of these four factors.

Similar to the economy, which presidents try to take credit for when it’s doing well or pass the blame to their predecessors when it’s performing poorly, any attempt to pin the price increase of gas solely on Biden is not only incorrect but ignores the complexities of the oil and gas sector.

While Biden’s climate change policy proposals could affect future gas production in the US, according to an EIA forecast published on June 15, there are several global variables at play that will affect the price of oil and gas beyond the control of the US President — including how much crude oil Iran produces and if OPEC+ countries stick with their agreements on oil production.